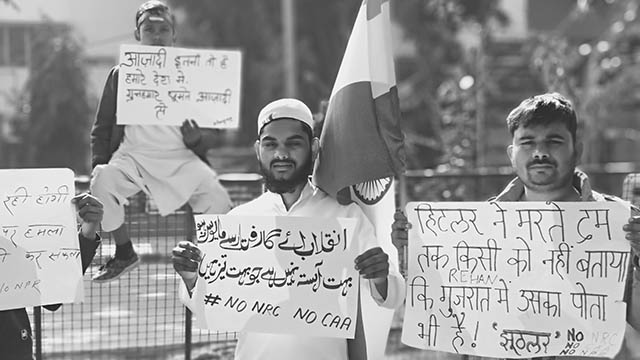 “In any country the faith and the confidence of the minorities in the impartial and ever functioning of the state is the acid test of being a civilized state.” These lines by Justice Rajinder Sachar were made back in 2010 in a study published by Oxford University Press and it still echoes in the ears of those holding the fort.

Indian Muslims are a peculiar minority. First, by their sheer number, 14.23% of the total population of India (Census 2011) making India the second-largest Muslim country in the world, surpassing neighbouring Pakistan. Despite their greater number, the condition of the Indian Muslims is lamentable, especially in the regime of the Bharatiya Janata Party (BJP)-led National Democratic Alliance (NDA) government. They already stand out among the country’s minorities for their troubled legacy. The lost children of India’s partition, Indian Muslims bear the stigma of the past. They are burdened with the unnecessary and unproven baggage of vivisection of India and their loyalty has been continuously questioned by sections of the state, of the media and of the political class.

With the BJP sweeping the 2014 Lok Sabha elections, the much-anticipated fear of Indian Muslims came crawling through the window of power. Previously, they have often been suspected of pan-Islamist leanings by Hindu nationalists but never would have they thought that they would be degraded to second class citizens in their very own nation. Much has already been spoken about their miserable condition and they live on the margins of the structures of economic, social and political relevance. This article attempts to explore the solution that lies ahead of them.

Fair representation is a desirable goal in a democracy. Muslims in India deliberately need better political representation. A democracy like India should ensure that minority views, opinions and votes are not ignored when governments are formed by majority principles. There are not enough Muslim legislators in the Parliament and state legislative assemblies.

Out of the 3,976 members of legislative assemblies (MLAs) across the country, only 223 MLAs are Muslims making up just 5.86% of the total. There is a meagre 4% representation of Muslims in the Lok Sabha.  The current Council of Ministers, headed by Prime Minister Narendra Modi, has only one Muslim minister, Mukhtar Abbas Naqvi (Ministry of Minority Affairs) out of a total of 74 ministers.  If we go a step further, we come to a shocking reality that currently there is no Muslim chief minister of any state in India. The more we dig deeper into the statistics, the more abysmal the number gets. One of the reasons behind fewer Muslim representatives in the political arena has been the reluctance of the political parties to nominate Muslims.

There are a few fierce minority leaders on whom rests the weightage of the entire Muslim community. Here, I will specifically talk about Asaduddin Owaisi, the All-India Majlis-E-Ittehadul Muslimeen (AIMIM) leader. Owaisi has every potential to become a national leader of the Muslim community. He is fierce in his speeches, he is known for asking the right questions in the parliament and above all, he is the only one talking about issues of the minority.

Apart from Hyderabad, his electoral base has now spread to Maharashtra and Bihar, where the AIMIM has won both assembly and municipal seats. In the 2019 Lok Sabha elections, AIMIM won a seat in Maharashtra, apart from Hyderabad. However, AIMIM’s spread has serious implications for both the BJP and the Congress party. It’s alleged that Owaisi’s success in reaching out to Muslims will benefit the BJP and bleed the Congress. If Muslims move away from the Congress, the BJP’s winning possibilities in every state will increase tremendously.

Let’s, take a brief look at Bihar Assembly elections which concluded last month. There are six assembly constituencies under the Kishanganj parliamentary constituency in Bihar and the AIMIM won four of them – Amour, Baisi, Bahadurganj and Kochadhaman. It further bagged the Jokihat seat under the Araria Lok Sabha constituency, taking the party’s tally to five.

These five seats may appear feeble in comparison to total seats in Bihar assembly but they severely hampered the prospect of both the Rashtriya Janata Dal (RJD) and the Congress party, snatching victory away from the Grand Alliance. With the AIMIM planning to contest the West Bengal Assembly elections next year and the BJP making its swift entry in the state, the ruling Trinamool Congress (TMC) must brace up for a mud gripping political contest.

Under Owaisi, the AIMIM, too, speaks a Muslim nationalist language just like the BJP’s narrative of Hindu nationalism. Muslims across India seem to be gravitating towards him in quest of better representation, but this has long term dangerous implications for the Muslim community. The Hindutva model of targeting Muslims as the permanent enemy, and Owaisi’s attempts to organise Muslims electorally, may lead to national disorientation and gradual disaster wherein BJP will emerge as the real winner. Owaisi’s rise as a visibly Muslim leader is as much BJP’s need as the AIMIM’s.