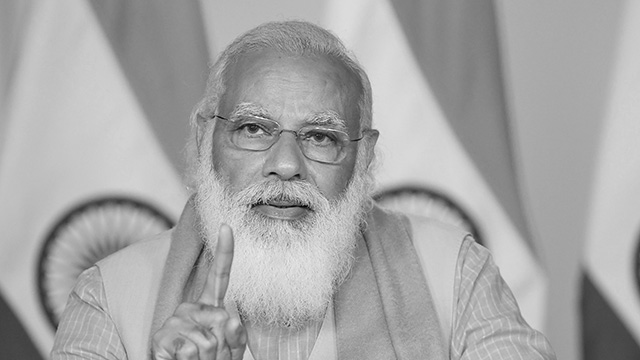 Prime Minister Narendra Modi’s introduction of two new terms to ridicule nation’s citizens who use their democratic right to protest is disrespectful, derogatory, and vile. Besides making his speeches intolerable to watch due to their arrogance and hubris, they also exhibit his core political beliefs: Authoritarian Hindutva, one-party rule without any opposition, a pliant media and judiciary and an obedient citizenry that is grateful to a government which assumes that its rule as a Hindu party is by divine privilege.

Quite consciously, in his Rajya Sabha speech, he had made no distinction between the currently protesting farmers and their supporters, both of whom he derided as andolanjivis (protest or movement creatures) and parajivis (the parasites), though in the speech at Lok Sabha on the following day, he tried to separate farmers and their supporters as genuine protesters and as those who live by protests, respectively.

If one paid close attention to this use of language one can perceive how far Modi has come from being an andolanjivi himself to arrive at his current position and to deem all protesters as either andolanjivis or parajivis. In the very speeches, one can also perceive a certain derisory tone and an exhibition of the arrogance of power towards common man/woman’s fundamental democratic right and practice: participation in political protests.

In a word, Modi, the creature of many a protest such as Gujarat Navnirman Andolan and Ram Janam Bhoomi Andolan, is telling Indians that “the government knows the best, you just pray, pay and obey”. Unless, of course, his participation in these movements were not as andolanjivi but as a parajivi who wanted to improve his political fortune by piggybacking on such protest movements his recent stance on protest movements and protesters appears to be disingenuous or outright hypocritical.

However, given his identity as a Rashtriya Swayamsevak Sangh (RSS) pracharak (proselytiser), one could conclude that Modi was acting as a parajivi just as his parent organisation had been doing throughout Indian history. From that point of view, his current stance appears to be the foundational discourse of his purported Hindu Rashtra whose many faces of authoritarian fascism have been evident in the everyday life of the nation.

Despite the cruel and derisive intent of Modi, when taken as metaphors andolanjivi and parajivi can become excellent tools to describe the current state of Indian politics: the role of the political parties, the role of social/protest movements and the parasite (RSS-Hindutva-Modi) that is devouring Indian democracy since a few decades.

The speed of its devouring Indian democracy has acquired breakneck since Modi came to power in 2014. Now, with the introduction of these two terms to discredit Indian political tradition and, with it, democracy itself, the time has come to take a stand and show how wrong Modi in his speeches was and how important it is for citizens of any democracy to call his bluff and announce their primary identity as andolanjivis.

In this process, if they realise how dangerous a parajivi Modi has become for the nation that would be a liberating outcome. If he has given up being an andolanjivi, which he definitely has, he has unhesitatingly embraced being a parajivi of Indian democracy as well as his corporate enablers. This is a battle for the soul of Indian democracy.

Hypocrisy and ingenuity of a super parajivi

Most political parties emerge on the political scene either by leading a social/protest movement or by being part of a social movement. The history of Indian National Congress and that of the Muslim League of pre-independent India led Indian freedom struggle by leading the freedom movement. They contain a tradition of andolanjivis who forced the British to leave the country and establish independent India and Pakistan.

That today most of these parties have fallen into the hands of dynasts, whose chief objective is being in power or to gain power and have ended up being parajivis cannot be doubted. From that point of view, Modi gets credit for coining these terms if he meant them to be used this way or not.

The sad part of Indian politics today is that just to maintain their political relevance or survival most of the opposition parties must assume the role of parajivis of various andolans (movements)or babas and mullahs. However, the story of the RSS and Modi’s Bharatiya Janata Party (BJP) stand out more as parajivis rather than as andolanjivis throughout India’s history–beginning with their icon Savarkar.

Hence, one could say, that if there is one parajivi which has achieved its current position of power in Indian politics it is the RSS and its brainchild, the BJP. Modi is its dynast. With the establishment of the RSS in 1925, the seeds of this parajivi were introduced into the Indian socio-political arena.

For a century this chameleon-natured parasite has changed its colours many times, only to be made tolerable and acceptable into Indian socio-political ethos. However, to a perceptive observer of the evolution and mutation of fascism in the world, the core ideological objectives of this parajivi have remained the same. Only the political coating has been modified to make it palatable to be part of various andolans and to the ordinary, secular, and tolerant Indians.

Having achieved absolute power by piggybacking on other regional parties, and protest movements, now this super parasite has managed to stand on its numerical strength as the ruling party. With absolute power now all pretence of being a promoter of democracy in line with the constitution is off.

Having devoured already the vote banks of the parties that allowed space on their platform for this parasite it did not take Modi, the super parajivi, to shed those little bodies (regional parties) which have become a kind of dead weight when he wants to go full speed with his social, political, and economic agenda.

Most of these parties had been carrying on as Modi’s alliance partners and enjoying the comfort of power just like that frog that was living in a pot that was being heated slowly from under. Like the frog that didn’t care about the slowly increasing heat until it was completely cooked before realising it, many of these parties have begun realising the increased heat of losing their painstakingly cultivated vote banks. Now they know how lethal this parasite has become. So, long before being devoured completely by this parajivi, they have been trying to excise themselves from this over-grown killer.

That is what is happening now. Shiv Sena in Maharashtra realised with pain the predatory nature of this parasite quite early. So did Akali Dal, Apna Dal and others from various states. As it is, most of these political parties are nothing but parajivis themselves in different garbs.

As mentioned above, being under the leadership of the second and third generation dynasts whose only effort is to stay or gain power, they hardly are at the forefront of any movement today. Their being wedded to neoliberal economic policies and caste or regional identities has dented their ability to oppose policies that derail the neoliberal capitalist undertakings of their paymasters. That is the reason, from time to time they piggyback on various andolans and benefit from andolanjivis’ hard work and undaunted courage and sacrifices.

Hoping for these parajivis to defeat the super parajivi Modi is like hoping against hope. Modi also knows it. He has understood their pulse and their weakness. He knows how deeply steeped in corruption these dynasts and their parajivis are. After all, it is by constantly riling against their corruption that Modi had made himself acceptable to Indians despite his genocidal 2002 Gujarat pogrom. That is why, ever since coming to power, he had been buying many of them for a price, pressuring and blackmailing others who could not be bought, and naming, shaming, and jailing those who boldly stand up against his policies of laying waste of the nation’s wealth, communal health, and constitutional safeguards. With the help of those whom he bought he formed governments, with those who defied he jailed and those who could not be jailed he is identifying, isolating, and defaming. Now it is the turn of Indian farmers.

We have been witnessing Modi’s cruel tactics of false flag operations to frame people who could not be cowed. We also know how since the day he came to power in 2014 he has been inducing Hindutva shock therapy and traumatising various segments of Indian society so that he could push through his neoliberal agenda. In this context, we know the story of students, academics, social activists, journalists, Muslims, and artists who defied him and continue to defy him. These are the real andolankari (protesters) groups that have stood like a fortress against the Hindutva onslaught over the Indian Republic.

Modi knows that to achieve his neoliberal, authoritarian Hindu Rashtra the “last man standing” is not the other opposition parties but it is the woke citizens who are trained for seven decades through their democratic participation and myriad movements that they participated directly or indirectly.

In andolans (movements) of the past, Modi had managed either to break them, traumatise them or at least save his face. But with the farmer’s Andolan his bluff is out. Through sheer grit and numbers, they are defying the might of Modi’s authoritarian state and his online and on the ground stormtroopers.

For an authoritarian narcissist, this defiance is extremely uncomforting and infuriating. Those two speeches in the parliament are an exhibition of his anger and frustration that he has been suffering due to the defiant farmer protests. Otherwise, how can anyone make sense of a prime minister of the world’s largest democracy trying to defame the quintessential democratic practice of an aggrieved population?

His frustration stems from his failure to demolish this last bastion of the democratic pillar that vitiates his need for a smooth ride to handover the last Indian asset to his corporate cronies: the land and food.

Hence, for democracy to survive from being devoured by Modi’s Hindu Rashtra project, the only hope is Jan Andolans (people’s movements) and andolanjivis. That’s why India needs to stand by them despite the ridicule, derision and hurdles placed on the way by a fascist and authoritarian regime run by a super parajivi.

If the ongoing farmer’s movement is of any worth, more and more parties will realise the destructive and opportunist politics of this parajivi. This could also make people realise how destructive to the national fabric is the divisive politics of the RSS-BJP and Modi. If the farmers’ protest could bring together the polarised communities, that would be a victory of the derided, insulted, and ridiculed andolanjivi of Indian democracy. This would be a moment the andolanjivi (the body of democracy) destroys the parajivi (the divisive ideology of Hindutva, the demon of Indian democracy) to rebuild the nation according to the dreams enshrined in the constitution crafted by BR Ambedkar.