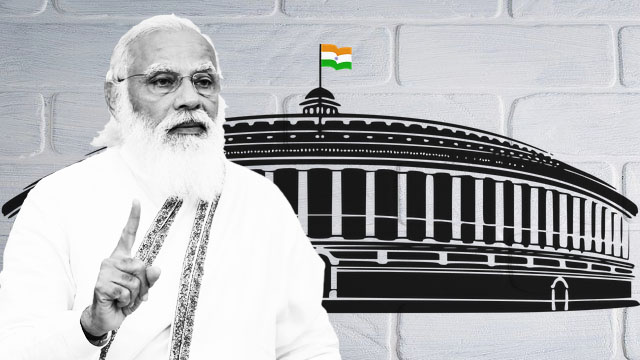 Since the beginning of 2021, India has been experiencing the second wave of COVID-19 pandemic. Ever since images of people dying without medical care and oxygen supply have been dominating social media and mainstream media. India has become the epicentre of the pandemic and Indians have been dying like flies, their bodies strewn on the streets, buried in the sand on the banks of the rivers and floating in rivers as food for birds, fish and animals. These were not normal deaths happening due to Covid. They were happening because of the failure of the public healthcare system. Hence, one should call this no less than a genocide.

However, all this while, except for some outspoken individuals, a handful of judges in India and the international media, none in India has been daring to place the blame where it should be: the central government and those who are at the helms of it, the prime minister and his ministers, as well as state governments and those who are heading them.

Hence, despite the images of the burning pyres and floating dead bodies everywhere, that, too, within a few months, the Indian pandemic story will have to be written in history as “a genocide without accountability” because the slogan still going around in social media, the mainstream media and among people is: Ayega to Modi Hi (it will be still Modi who will win).

For a neutral observer of this obscenity, several questions would haunt her/his rational mind. Why aren’t Indians angry even after they lose their loved ones and savings during the pandemic? Why aren’t they angry about a leader who promised them Ache Din (better days) and prosperity but delivered nothing but joblessness, business bankruptcies, death and destruction?

Why aren’t they calling out the leader’s hypocrisy as he hides behind the curtain of his beard and radio ranting (Maan Ki Baat) homilies while their ill and suffering were panting for oxygen and a hospital bed and, those living, queueing for funerals? How to explain the Opposition political parties being comfortable with merely tweeting and protesting on social media and mainstream media and failing to exact accountability from a failed government under whose watch a genocide is allowed to happen?

How can one understand a democracy with powerful media engage in inanities and promote government propaganda to numb the public and inure the government from what is unfolding? Is it a cultural thing to take elections as “festivals of democracy” but expect nothing from those whom they elect? Is it religious mind-control that makes one accept natural disasters and personal calamities as normal and determined by one’s fate? Is it the result of millennia-long caste and communal injustice that makes people expect nothing from a state and society that is under the thrall of the upper caste elite, which is steeped in perpetuating inequality, injustice and corruption without having to pay for this perfidy? Or is it the numbing of a nation’s sense of justice through media propaganda that diverts people to issues that entertain and live in a fantasy land ruled by a fantasy king where “everything is fine” is the mantra that has managed to replace reality?

Identifying the culprit by name

These questions will haunt anyone who has some sense of justice, compassion, accountability and anger left in them. That is why the international media, not afraid of authoritarian fascist Narendra Modi, did not hesitate to call a spade a spade when it saw what has been unfolding in India.

It all started with the Australian (an Australian newspaper) reproducing an article published in The Times, a British newspaper, blamed Modi for leading India out of lockdown and into a “viral apocalypse”. The Australian newspaper did not hesitate to name the causes behind this disaster due to the Modi government’s “arrogance, hyper-nationalism and bureaucratic incompetence” which have combined to create this crisis of epic proportions. The article also did not hesitate to point out Modi’s Nero-like approach with words: “India’s crowd-loving PM basks while citizens suffocate.”

Other international media described Modi’s failure as due to his obsession with image management more than administrative competence (Washington Post), “lack of anticipation, arrogance, and demagoguery” (Le Monde), not just “criminal negligence” but an “outright crime against humanity” (The Guardian) and describing Modi as a “vainglorious man,” a “shameless demagogue” who is committing a “seemingly vengeful act” with an “almost messianic desire” to position himself in line with Gandhi and Nehru (Daily Mail). The Daily Mail wrote the above comment referring to Modi’s $2.8bn Central Vista project, a replica of Adolf Hitler’s ‘Germania’ project, which is continuing amid the crisis.

In the Washington Post article mentioned above professor Sumit Ganguly has opined that the Modi government was careless and reckless in its decisions and hence invited the second wave that has now rendered India an international pariah. Here is his trenchant opinion:

“This colossal failure of policymaking has many forebears: general callousness, crass electoral considerations and sheer ineptitude. For a government that first assumed office in 2014 with a promise of sound, technocratic governance, and an end to political paralysis, the second surge represents an astonishing abdication.”

Yes, “abdication” of responsibility because during the worst days of the pandemic Modi was electioneering with huge crowds in West Bengal and changing a chief minister in Uttarakhand who refused to allow Kumbh Mela, a super spreader event.

Even after the elections, Modi was not only absent from the public but was even egging his lap-dog media and social media trolls to deflect the blame on the “system” and the past governments. But when he emerged recently out of his rat-hole to address the people he sermonised the nation about how to remain safe and how sad he was for the loss of their loved ones. But he neither apologised for what he caused by his mistakes nor spoke about any plans to solve the crisis.

Hence, by now, the people who have lost their loved one’s had no patience for his crocodile tears and they laughed at them as fake. And yet Indian mainstream media still tries to save the man by transferring blame on the ‘system’ and the unscrupulous and self-serving bureaucrats, who are part of that system and cause their ‘Great Leader’ to fail.

As the pandemic ravaged the nation and touched every nook and corner of the country, without even leaving those who were the ardent supporters of Modi despite his ‘genocidal’ past, questions are being asked everywhere: who should pay for this neglect and failure where millions of Indians lost their lives, loved ones and livelihoods?

Some are daring to ask even the question: will Modi pay? However, Modi’s social media army of 3.8m WhatsApp groups targeting 700m people out of 1.3 bn Indians, and numerous Facebook groups supported through his Bharatiya Janata Party (BJP) and Indian government advertisements have already been employed to deflect responsibility from the government and create an alternate reality with new campaign slogans to salvage Modi’s image as the saviour-god of India.

This propaganda preaches that there is a huge conspiracy against Hindutva and Modi so that India be scuttled from being the Vishwaguru (the world’s teacher). The propaganda argues that this pandemic was spread in India by enemies (such as China and Western governments). And the most preposterous and shameless campaign is that if it were not for Modi, India would have had 100m deaths.

Many news channels, aren’t focusing on the real issues and are instead carrying out government propaganda. This deflection of responsibility was perfectly sanctified by none other than Mohan Bhagwat, the head of Rashtriya Swayamsewak Sangh (RSS), the current government’s ideological mentor, when he apportioned responsibility upon the government, the administration and the people.

All in all, it appears that none in this government will bear the responsibility for not planning but, instead, causing the spread of the virus due to failure of adequate policies, failure to provide medical support, failure in providing funeral facilities, failing to curb racketeering and black marketeering of drugs, oxygen and ambulance services, and failure to vaccinate the people.

Ever since their humiliating defeat in West Bengal polls, both Modi and Amit Shah, the home minister who should have led the nation in facing the pandemic, appeared to have gone into hibernation and nursing their wounds. No one has heard a word from Amit Shah.

Do Indians love a leader with ‘genocidal’ fame?

It appears that there is some battering to Modi’s strong-man, saviour-god image. However, will Hindutva-incensed India abandon their newfound “Messiah” who put Muslims in their place as second-class citizens, Dalits as ‘scum’ of the caste hierarchy from where they should not claim rights over the republic, and the liberal-secularists and the elites (Urban Naxals) targeted as “anti-nationals”?

Today’s “Proud Hindus” (typical upper-caste elites and urban middle-class) in 2002 voted overwhelmingly a leader who allowed a ‘genocide’ to take place under his watch where Hindutva zealots burned, raped and killed numerous Muslims in Gujarat. The same leader was elected to be the prime minister in 2014 based purely on his promises to right the wrongs suffered by Hindus for centuries under Mughal and European (Muslim and Christian) rule.

Once again in 2019, he was re-elected with an even bigger majority over the dead bodies of over 40 security personnel (Pulwama incident). Hence, will Indians still elect Modi despite so many deaths caused by Modi’s failure to govern? If history is any witness one should say “Indians love leaders with ‘genocidal’ fame as long as he satisfies their thirst for revenge against Muslims, Dalits and secular liberals. Modi—with his rhetorical skills, emotional antics and sway over the media, even though was not capable of making India great again—is fully capable of making such zealots fools again.