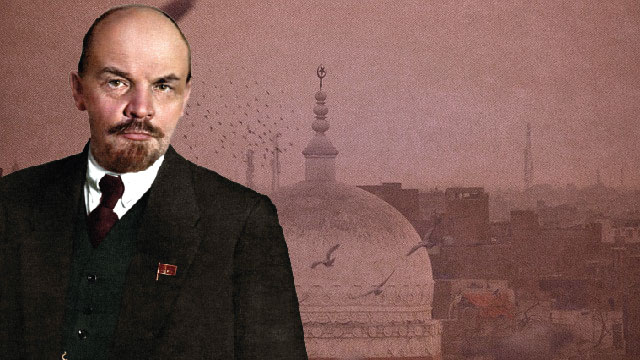 Fascist groupings and their associated policies of religious fanaticism are on the ascendant throughout the world. While some are emerging from the political peripheries – slowly but steadily gaining traction on the terrain of ideological hegemony – some have already taken the reins of state power. India is no exception to this global trend. In this political context, April 22, 2022 – the 152nd birth anniversary of Vladimir Ilych Lenin (the founder of the Soviet Union) – can serve as an occasion to explore the contemporary relevance of his perspective on the issue of religion. Following the materialism method, Lenin emphasized that religion is a byproduct of the concrete logic of its surrounding system of social organisation. In “Socialism and Religion,” he said:

“Religion is one of the forms of spiritual oppression which everywhere weighs down heavily upon the masses of the people, overburdened by their perpetual work for others, by want and isolation. Impotence of the exploited classes in their struggle against the exploiters just as inevitably gives rise to the belief in a better life after death as impotence of the savage in his battle with nature gives rise to belief in gods, devils, miracles, and the like. Those who toil and live in want all their lives are taught by religion to be submissive and patient while here on earth, and to take comfort in the hope of a heavenly reward. But those who live by the labour of others are taught by religion to practice charity while on earth, thus offering them a very cheap way of justifying their entire existence as exploiters and selling them at a moderate price tickets to well-being in heaven. Religion is opium for the people. Religion is a sort of spiritual booze, in which the slaves of capital drown their human image, their demand for a life more or less worthy of man.”

From this passage, two points can be gleaned. First, on the structural level, religion itself can’t be said to be a source of oppression; it is only an indication of oppression. In the words of Lenin, “economic slavery” is the “true source of the religious humbugging of mankind.” In “The Attitude of the Workers’ Party to Religion,” he commented: “The deepest root of religion today is the social oppression of the working masses and their apparently complete helplessness in the face of blind forces of capitalism, which every day and every hour inflicts upon ordinary working people the most horrible suffering and the most savage torment”. Second, on the ideological level, religion is a source of oppression because, as Lenin says, it leads to “the coarsening and darkening of the spiritual and moral life of the masses”. In his essay on the collapse of the Second International, he elaborates that “the priest is required to console the oppressed, to depict to them the prospects of their sufferings and sacrifices being mitigated (this is particularly easy to do without guaranteeing that these prospects will be “achieved”), while preserving class rule, and thereby to reconcile them to class rule, win them away from revolutionary action, undermine their revolutionary spirit and destroy their revolutionary determination.”

Considering that the survival of religious abstractions depends on historically specific modes of production, Lenin remarked that the “combating of religion cannot be confined to abstract ideological preaching, and it must not be reduced to such preaching. It must be linked up with the concrete practice of the class movement, which aims at eliminating the social roots of religion.” Interestingly, Lenin said that atheism should not be considered a prerequisite for joining this material struggle to deprive religion of its material support and make it a purely private affair. In defence of this viewpoint, he stated: “No number of pamphlets and no amount of preaching can enlighten the proletariat, if it is not enlightened by its own struggle against the dark forces of capitalism. Unity in this really revolutionary struggle of the oppressed class for the creation of a paradise on earth is more important to us than unity of proletarian opinion on paradise in heaven.”

In other words, while atheist propaganda is used to weaken religion, the process of secularisation is not singularly reliant on this pedagogic method; instead, it is internally driven by the productive tension that a proletarian individual feels between the supernatural character of their religious belief and the wholly earthly agenda of communism when they join a workers’ movement. In this dynamic interaction, religion’s passivising and reactionary aspects are thrown away, and the anthropological dimension is fully regained. Religion is, in part, the infinitisation and projection of humanity’s most cherished values (love, righteousness, wisdom and so on) onto a mythic notion called God. That’s why Ludwig Feuerbach had commented that “God has no other aim of action than the moral and eternal salvation of man: thus man has in fact no other aim than himself.” With the contradiction induced by the Leninist strategy of the political coexistence of private religious beliefs with a communist programmatic outlook, the positive and human-centred components of religion are re-appropriated.

What importance does Lenin’s opinion on religion have for India? Aijaz Ahmad notes that British colonialism harmed India’s cultural fabric. Due to the divide-and-rule policies of the imperial administration, Indian colonial society had become “organized, socially as well as politically, around the axes of caste, religion and region”. “So overwhelming was the weight of religion in all this, and so reluctant were the Indian liberal modernists to confront that power frontally, that even the canonical, multi-denominational, professedly secular nationalists simply redefined secularism as not a separation of religion and politics but as “equal respect for all religions,” in the telling and broadly accepted phrase of Dr Radhakrishnan, a conservative Brahminical scholar who served as the second president of independent India.” Ahmad explains that this redefinition of secularism was inherently problematic:

“For the actually believing person there is always something unique about his own religion so that he cannot possibly have “equal respect” for a different religion; for a believing Muslim, Hinduism is intrinsically inferior. More to the point, equal respect for all religions in the conduct of the affairs of the state would necessarily lead, especially in the context of the corruptions of liberal democratic politics, to greater respect for the religion of the demographic majority whose votes count for more, whose privileged classes command much more money and power, and among whose middle classes new kinds of religiosity are now rampant.”

In contrast to this attempt to restrict secularism to the traditional ethic of religious toleration, Lenin’s open attack on the crudeness of religious convictions and the proposal to secularize religion through the force of class struggle can function as effective ways to counter the extreme Right. By deploying these strategic tools in the present-day conjuncture, the Indian Left can create a new civic culture based upon a subjectively thick mode of religious understanding that facilitates a culturally informed openness toward different religions. In this Leninist model of secularism, the public importance of religion would decline not through its privatisation and individualisation but through the revolutionisation of religiosity that would make it expressive of subaltern needs and thus, extract a common humanistic core from every religion.