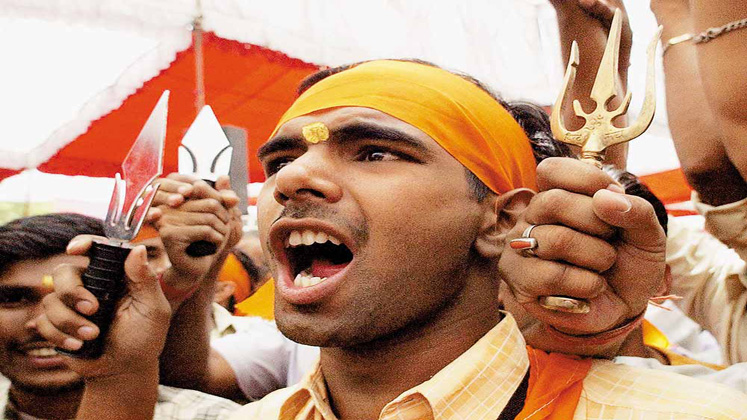 The far-right Hindu extremist group RSS and its mass organisation – the BJP is trying to fish in the murky waters of communally volatile Western Uttar Pradesh during the assembly bypolls for the Muzaffarnagar and Deoband constituencies, vacated due to the death of the MLAs.

Rampal Singh Pundhir, a RSS Pracharak, is the candidate for the Deoband constituency and has reportedly told the Indian Express that if elected he will ensure that the “Muslims will feel scared. They and their hooligans will feel our terror”. The RSS activist, as reported by Indian Express, was himself jailed for attempt to murder. He is now lecturing about hooliganism, and making the foul cry, a trademark of the Sangh outfits, that exclaims that Hindus are threatened and bullied by Muslims, who are indeed less than 14 percent of the country with Hindu majority.

Apart from the crooked claims and fabricated information provided by the saffron goon, the rhetoric used openly by this bootlegger of fascist Hindutva and his open declaration of imposing a rule of terror, goes unchallenged from the political spectrum of Uttar Pradesh and the country. The Mulayam Singh Yadav – Akhilesh Yadav led Samajwadi Party government is clearly hand in gloves with these terror forces peddling saffron brand of terrorism in the country. The government, which once showed its hyper-active spirit of Muslim appeasement for vote bank politics to arrest Kamlesh Tiwari, the expelled Brahminical leader of the Hindu Mahasabha, who hurled abuses at the Muslim prophet Muhammad; remained indifferent to the threats so openly issued by the pracharaks like Rampal Singh Pundhir.

The threat on Muslims issued by Rampal Singh Pundhir is nothing new, but a more precise version of what the celebrity fascist rhetoric mongers of the BJP like Sakshi Maharaj, Yogi Adityanath, Niranjan Jyoti, etc. use in their daily communications. Even the Muslims, especially in the communally volatile Western Uttar Pradesh, has stopped taking note of these threats and name calling. This indicates the level of communal disharmony and polarisation caused by the Modi government’s policies, which is blooming in the fields of the Western Uttar Pradesh due to the covert support of the Samajwadi Party government.

While the NIA showed proactive measures in booking some “suspected Islamic State” militants across the country, on charges that still lack concrete evidence, it seems to have turned its eyes off to the open threat of imposing a rule of terror by an individual who belongs to the ruling camp. There is evidence, there is an intention and it bears very dangerous consequences to the constitutional values that the government and its organs stands upon. Asking nothing more than what the constitution stands for, can we have the government and its agencies look into this matter as a matter of national security, a threat to internal peace and a clear threat of terrorism? It seems unlikely, and that is unfortunately the state of affairs in India.