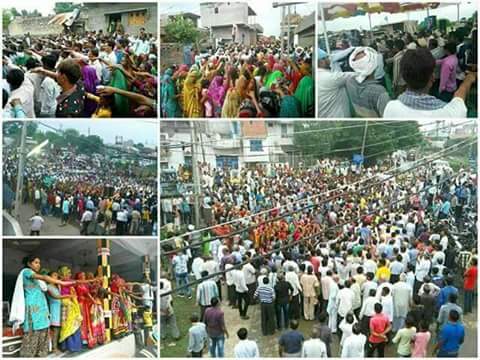 Dalit liberation struggle of the country reached a new peak in Gujarat, the citadel of Hindutva fascism promoted by Modi and his coterie. The uproar of the Dalits in the state has caused the heads to roll, Anandiben Patel being the first casualty. The spark that was ignited after the brutal flogging of the Dalit youths in Una by a gang of RSS sponsored cow vigilants, turned into a prairie fire, which is now threatening to burn down the fortress so beloved to the Nagpur based Hindutva terror forces.

The cow vigilante forces intensified their campaigns against minorities and Dalits in most part of the country, especially in Uttar Pradesh, Rajasthan, Gujarat, Punjab, Karnataka, Maharashtra, and other states where BJP is either in power or eyeing power since the Narendra Modi government was formed in May 2014. The cow protection campaign, as the vigilante is called, assaulted cow traders, farmers, butchers, and people who skin dead animals under the garb of protecting cows. The so-called cow protection campaigns, carried out by a boisterous and often a rambunctious mob of upper caste Hindu men, serves two specific purpose of the entire Sangh clan – on one hand it provides them the fodder to carry out the polarisation drive on communal and caste lines to ensure electoral victory against their opposition, on the other hand, it provides them a very ample opportunity to extort money from their targets, who are mostly forced to pay in cash or kinds to remain immune from brutal assaults. The Sangh coffer is filled with either large scale corporate and trader contributions or through extortions carried out by different outfits managed by the Nagpur-based headquarters of the RSS.

The cow terror has crossed across state borders and are reaching new places every other day. When the Dalit people of Gujarat were protesting against the atrocities committed against them by the upper caste goons in Una, two Muslim women were thrashed in Madhya Pradesh by the cow vigilante force in front of policemen, a Dalit family in Chikkamagaluru district of Karnataka were assaulted by the notorious Hindu terror organisation, Bajrang Dal activists. Members of parliament and state MLAs of the BJP were found justifying the horrible terror attacks on the Dalits by playing the “Holy Cow” card. Prime Minister Narendra Modi, who strongly believes that by doing manual scavenging the Dalits are serving a spiritual purpose, kept a long and suspicious silence over the handiwork of his supporters in these heinous crimes and despite repeated demands from the Dalit right activists of Gujarat and other places to speak up on the issue, this self-styled Gujarati champion remained aloof.

As soon as the Dalit movement became intense and the struggle of the Dalits in Gujarat inspired their counterparts all over the country to vehemently oppose Brahminical fascism, especially the Dalits of Uttar Pradesh who form 26 per cent of the population of the poll bound state, the BJP-RSS and the Prime Minister started feeling the heat of poll compulsions. For the BJP to win the UP elections it is mandatory to polarise the entire Hindu electorate, including the Dalits, to ensure a smooth victory. It was time for the BJP and the RSS to do damage control in order to hold back the polarisation gains of the 2014 elections in Uttar Pradesh and to ensure the core vote-bank of the BJP in Gujarat, the landowner Patidars are prevented from joining any anti-BJP wave. After purging Anandiben, BJP placed Vijay Rupani, a non-Patel and Jain, as the Chief Minister of Gujarat with Nitin Patel, a trusted Amit Shah aide as his second in command. The BJP also kick started a Buddhist Dhamma rally  across Uttar Pradesh to win back the Dalit support but the Dalits protested en-masse against these hoodwinks of the Hindutva brigade by showing black flags to the monks in the rally. The Dalit furore against the BJP forced Amit Shah to call-off the Dalit gathering planned in Agra.  The damage control exercise was followed up very soon by the Prime Minister Narendra Modi just before the Dalits of Gujarat started a great rally from Ahmedabad to Una calling on the entire Dalit masses to leave those very professions that are bestowed upon them by the oppressive caste system.

The pressure of the U.S. corporate lobby worked more swiftly than the repeated calls of the activists and opposition forces within the country; Modi for the first time in his political career spoke against the Gau Rakshaks from within a safety coverage. Modi, replicating the U.S. nomenclature of “good Taliban” and “bad Taliban” peddled the theory of good or genuine and rogue cow vigilante forces operating in the country and throwing his support for the former, while calling the latter bunch of criminals. Soon,RSS, the parent organisation of the BJP, issued a statement condemning the “bad” Gau Rakshaks and the attack against Dalits. The organisation that claims of operating branches in the farthest nooks and corners of India has suddenly asked people to identify and expose the cow vigilante forces that are “bad” as per its standards and criteria, which remains undisclosed.

The “good and bad” cow vigilante concept was innovated by the RSS to ensure that the pressure from the U.S. and other Western countries is properly channelised along with the discontent of the people through the canals of rhetoric mongering while the hooligans running large with state support can carry on their job of intimidating the minorities in the name of cow, as the Prime Minister or the RSS intentionally omitted any mention of Muslims in the list of victims.

The Prime Minister added more spice to his drama, when he did rhetoric mongering to prove himself as a Dalit sympathiser in the very state of Telangana, where Dalit research scholar Rohith Vemula was butchered by Brahminical persecution of the University of Hyderabad Vice Chancellor with active support from the RSS affiliated student union ABVP and the Union Labour Minister Bandaru Dattatreya in January this year. After failing repeatedly in showing that Rohith Vemula was an anti-national and non-Dalit, the BJP and other Sangh outfits are now refraining from attacking him to ensure a smooth sail with the Dalit votes in Uttar Pradesh. The high voltage drama that the Prime Minister did even overlapped the drama by actor turned BJP leader cum former HRD minister Smriti Irani in the parliament. The Prime Minister, following his signature megalomaniac style, called upon the cow vigilante forces (bad Gau Rakshaks only) to shoot him before shooting the Dalits, yet he mentioned nowhere that his government will take the most stringent action or compel state governments to take stern action against culprits carrying out any oppression against the Dalit people.

The national corporate media highlighted the condemnation and subsequent theatrics performed by Narendra Modi and tried to show such condemnation in positive lights to build up mass opinion in favour of the BJP. They kept on suppressing the fact that while criticising the Gau Rakshaks and their attacks on the Dalits, the prime minister subtly played an anti-Muslim card when he claimed that earlier the “badshahs” (Muslim rulers) fought war with Hindu kings, “Rajahs”, as they are called, by placing the bovines at the front of their attack formation. As cow happens to be the most pious animal for upper caste Hindus, the Rajahs would fail to fight the war till victory and lose their empire.

The distorted history was cited by the Prime Minister to specifically polarise the Hindu vote-bank by demonising the Muslims as the force behind the recent cow-vigilante attacks on the Dalits in order to incite anti-Muslim hysteria among the Dalit community. The unity between the Dalits and Muslims in Gujarat is changing the hitherto prevailing equation under which the upper caste Hindutva fascists used the Dalits as their pawn against the Muslims during any pogrom. The Gujarat model of unity between Dalits and Muslims, which was also seen in Phagwara of Punjab where the united strength of Sikh-Muslim-Dalit community forced the Shiv Sena fascists to retreat, if implemented in the political landscape of volatile Uttar Pradesh then the BJP and RSS will bite the dust in the polls next year. The “Rajahs vs Badshahs” was part of that vile propaganda campaign of the Sangh Parivar through which it incites mob fury against Muslims using distorted saffronised historic references. Though most prominent historians sans the Sangh affiliated ones criticised Modi for using manufactured historic reference, the self-styled patriotic corporate media remained reluctant to expose this lie. It gives an endorsement, a silent and powerful one, to the RSS effort of saffronising history to incite communal hatred.

The excellent theatrics and high voltage drama however failed to convince the Dalits of Uttar Pradesh who have always found the BJP as the party of the upper caste feudal landlords and elites. The Dalits in Uttar Pradesh can see how assertively the BJP members are openly cheerleading Daya Shankar Singh, who made misogynist remarks against BSP supremo Mayawati, despite the party officially expelling him as a cosmetic measure to rein in the Dalit polarisation of 2014. The Dalits also saw how the unholy and unofficial alliance between the Samajwadi Party and the BJP has caused immense setbacks for the cause of Dalit liberation in the foremost bastion of Brahminical feudalism in India. The inhuman treatment meted out to the Dalits in BJP ruled Gujarat and the worst socio-economic condition of the community there frightened and consolidated the politically conscious Dalits of Uttar Pradesh.

To conceal its utmost failure regarding the welfare and social liberation of Dalits (which RSS strongly oppose) in its model and much hyped state Gujarat, the BJP has resorted to all type of hoodwinking measures it can use to win power in Uttar Pradesh, which will give them a fillip in the race for Delhi’s throne in 2019. As the situation turns bleak and gloomy for the RSS and its child organisation it seems that the BJP is left with no other option but the time tested strategy of inciting communal violence and pogroms in line of Muzaffarnagar to polarise the people before the elections under the umbrella of Hindutva. But the turn of events indicates that the Dalits may not only avoid falling for such a trap but also thwart it. As the Dalits of Gujarat march against the Brahminical atrocities, the shuddering upper caste elites and the RSS will find it impossible to break the encirclement they are in due to this massive upheaval and the democratic forces must seize the opportunity to lead the struggle of the Dalits of Gujarat towards victory by blending it with anti-feudal struggle to uproot the source of hierarchical apartheid system of caste in the country, i.e. feudalistic product relations.

The developments are inspiring, yet it is still to be seen how the democratic and progressive forces can utilise them to take forward the cause of Dalit liberation and usher a new era of democracy in India.