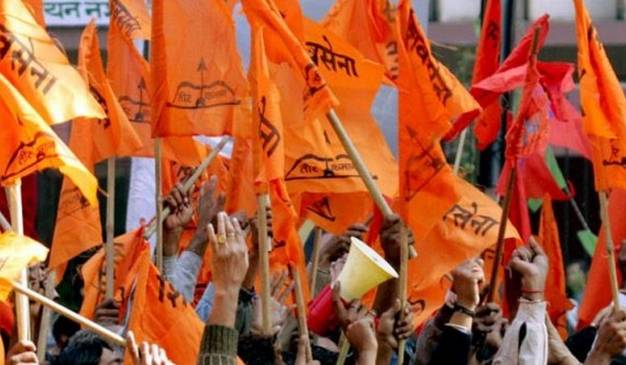 (This article was first published on 29th August 2015 in the previous version of People’s Review. Due to an incident of hacking the old website was pulled down and we could only restore the old articles in this section)

The Shiv Sena mouthpiece Saamna, infamous for its fascist venom spitting, recently wrote an article bashing the Tarun Tejpal lead Tehelka for publishing an article which honestly depicted Bal Thackeray as a ‘Hindu terrorist’. The Shiv Sena ideologue claimed that criticising Thackeray is like spitting at the sun, and Sr Thackeray was not a “Dharmandh” (blind follower of the religion) but a “Dharmabhimaani” (religious chauvinist).
The article also carried a clarion call to the Hindu’s, especially the Maharashtra-based followers of the fascist organisation, to turn Hindu ‘Human Bombs’ and invade Pakistan. A trademark xenophobic fascist slogan that the Shiv Sena is infamous for, which its founder Thackeray used to utter in order to preserve his decaying relevancy in the fascist politics of India during his lifetime and catch some limelight in the national corporate controlled press.

Shiv Sena mouthpiece has warned Tehelka, calling it to restrain itself or face the wrath of the Thackeray brand of fascists, a very clear sign of fascist intimidation that the Shiv Sena is notorious for, and which the police or the Maharashtra administration will overlook normally. For Shiv Sena and its Maharashtra based organisation is a core supporter of Nagpur based RSS, and any action against the fraternal Hindu fascist organisation of the ruling clique will be something that the Indian government cannot do within the existing legal framework. Even if it means that the remnants of free press is curbed, people heckled, dissenters butchered by the saffron wing, the ranting of the fascist saffron wing, from the Shiv Sena to the RSS – VHP – BJP will continue.

The fascist outfits in India grew out as a part of the Italian – German sponsored international fascist movement in the 1930’s, that was aimed at deviating the nationalist and liberation struggles of different colonies and semi-colonies and to vehemently oppose the communist and progressive – democratic forces of the international polity. The Indian fascist movement had its forerunners like the Hindu Mahasabha and the Muslim League, with the former crystallising into the RSS and Jan Sangh later. Shiv Sena and other saffron off shoots were late entrants to the Indian fascist wing, with the latter was driven with Maratha chauvinism and a single point goal to isolate the communist and left led militant trade union and peasant movement in Maharashtra, and the establishment of a pro-corporate saffron trade unions to stab the working class movement and divide the working class among the migrant non-Marathi and the indigenous Marathi sections to pit both against each other.

The Shiv Sena accumulated immense political popularity due to its so-called pro-Maratha politics in Maharashtra, which being an industrial capital of India, with the financial capital Mumbai, became a destination of labour from all over the country in search of livelihood. The Shiv Sena gained political space by arousing chauvinism among the Marathas, especially by appealing on communal lines and by distorting the history of the Maratha ruler Shivaji, whom the saffron wing eulogised as a ‘Hindu ruler’ who fought ‘Muslim outsiders’ to establish ‘Maratha dignity’ and capitalised on the Maratha emotions for their past king to farther their own communal agenda. Slain left trade union leader Govind Pansare through a painstaking research combated the misinterpretation of the saffron wing regarding the Maratha king by publishing the correct history of the ruler who not only had Muslims in his army and civil administration but also ensured a secular rule in his kingdom at a time when it was quite an impossible concept.

Indian history had been a history of pluralism, communal harmony, and struggle of the Dalit and oppressed castes along with the Tribals against the Brahmin domination. The saffron wings always fabricate the history to suit their version of communal history in order to consolidate their social base among the people by inciting communal hatred against the religious minorities.
Shiv Sena, a classic example of Indian fascism, with extreme cult worship of a fascist nincompoop, has based its political base on anti-Muslim ranting, anti-Dalit and Tribal politics, anti Non Maratha politics, misogyny, and jingoism. Alike the BJP and the RSS they try hard to distract the attention of the working people of the country, in the particular case of Shiv Sena the people of Maharashtra, from the real issues that bother their lives and livelihood to Pakistan and communalism. Shiv Sena and its accomplices has turned Maharashtra from a progressive province with an active militant working class causing insomnia to the big capitalists to a ideologically bankrupt province, divided along caste and communal lines, where the big capitalists like Ambani and Tata can rest in peace whilst the poor are left to die beneath speeding cars on the street of Mumbai.

The Shiv Sena, blessed by both BJP and Congress, which used it to farther their own communal agendas, always remained legally immune from any sort of prosecution under the law of the nation. The off shoot Maharashtra Nav Nirman Sena of Thackeray’s nephew Raj Thackeray is another princely political organisation immune from law following the footsteps of its parent organisation.
The Sri Krishna commission report on the Mumbai riots following the Babri Masjid demolition by the RSS-BJP in 1992, the numerous incidence of heckling the progressive and democratic forces by the Shiv Sena, the attacks on minorities and oppressed communities by the Shiv Sena, the targeted attack on the people of Bengal, Bihar, Uttar Pradesh, Tamil Nadu, etc living in Mumbai by the Shiv Sena, and many more such incidents goes without any legal prosecution in a country which is swift to prosecute and condemn the people of minority communities, tribals and oppressed castes.
This biased nature of the Maharashtra and Central government has boosted the spirit of the Shiv Sena activists, funded by underworld, big capitalists, and foreign monopoly capital. The organisation that thrives on hiring local goons and unemployed people by luring them with money and political power experienced a rapid growth under the most favourable political atmosphere that nurtured Hindu fascism since years.

It is quite evident that there will be no action against the Shiv Sena mouthpiece threats against Tarun Tejpal and his Tehelka. The friendly government of the BJP – RSS with Shiv Sena as their natural ally will certainly ensure that the media in Mumbai uniformly sing the hymn of praises for the late and existing Thackeray clan, without any deviation or dissent. This is the standard code of practice that the saffron wing is demanding from the media of the whole country to abide by, and the corporate media conforming quite obediently.