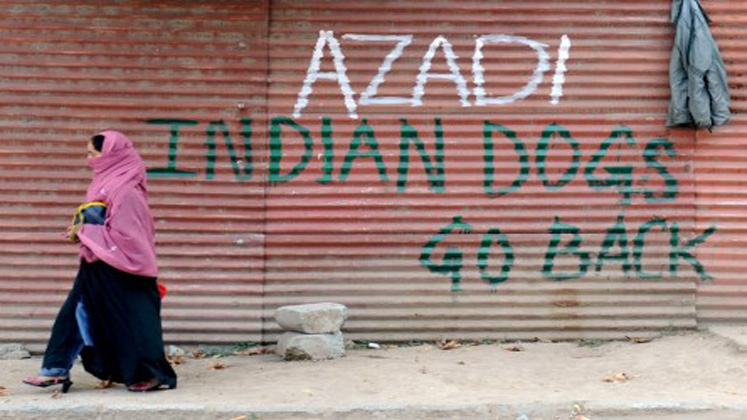 The present situation in Kashmir, if it is to be explicitly understood, should be looked at from the perspective of Kashmiri people rather than the run-of-the-mill viewpoint of Indian and Pakistani government. An undeniable fact is that the power that is responsible for the misery and oppression of Kashmiri people is the ruling government in general and the relationship between the central and state government in particular. Here, a very important concept is brought to light, i.e. the respective interests of India and Pakistan upon Kashmir. The people of that area see both the Indian as well as Pakistani military forces as aggressive and repressive and continue to resist it. To make matters worse, there is a heavy ‘iron curtain’ that is yet unveiled and behind this curtain hides the real face of the horrendous Indian government as the people of Jammu and Kashmir witness it. To the people, both Indian and Pakistani governments are ‘foreign’ socially, politically and culturally. To this one fact can be added that purely by religious sentiment, agents of the Pakistani government organise, support and popularise separatist movements against the Indian Union. The reason for the success of this kind of organisation is not the excellent strategies and tactics adopted by the Pakistani government but the will of the Kashmiri people who yearn for freedom from the yoke of Indian great nation chauvinism and oppression.

It is historically true for India, and more so for Kashmir, that the end of British rule in India did not free India from imperialist oppression and the indignities faced by the Indian people. The only difference was that the subsequent parliamentary governments took the place of oppressive forces that ruled India under the patronage of the British imperialism until 1947. These regimes and especially the fascist and jingoistic Modi regime, which unlike the Congress, does not share the Nehruvian diplomacy that is bestowed upon the party by its historical relations with Sheikh Abdullah, use the state government to keep the people divided and antagonistic upon religious and sectarian lines, primarily by the role of petty-bourgeois parties, and the central government to keep the state under the dominion of India by suppressing the will of the people using draconian laws like AFSPA. In order to gain consent of the Kashmiri people, it is therefore not only important for the Janus-faced BJP regime to support the PDP government even with all their ideological differences while at the same time use their power as the party in central power to use draconian laws like AFSPA and military terror to force the people into submission. In the name of looking after the interests of the Kashmiri people, they are actually serving their interests in the form of syphoning massive funds from the defence sectors into their coffers.

For the Pakistani government, Kashmir is climactic because of its close proximity to India and the religious closeness they share with the Kashmiri people. To completely understand why the Pakistani government is supporting the struggle against Indian state while suppressing freedom movements undemocratically near Sindh and Baluchistan can be best explained by a simple glance into the dependency of Pakistani government upon the US government and military. Countries like Pakistan and Afghanistan have become the fronts for the ‘war on terror’ campaign in Asia. However, instead of the war on terror, United States, due to its imperialist character has been the greatest exporter of terror ever since the conception of Taliban, or more recently ISIS. While Afghanistan serves as a legitimate ‘breeding and training ground’ for home-grown American-trained terrorists, Pakistan serves as a puppet regime to disrupt the unity of the people of Asia and Kashmir and the regime of Islamabad is used by Pentagon to create the necessary rift to maintain the contradictions responsible for the partition of India in the first place. Historically, one should bear in mind that India, Pakistan and Bangladesh were united socially as well as to great extent even politically. Pakistan as a state was itself forged out with a puppet regime which on the paper supports the policies of US and also has backdoor strategic ties wherein the respective intelligence agencies of Pakistan and US work together, sometimes against the interests of India and almost always against the interests of the people of the South East Asian countries. It is these corrupt imperialist forces of the respective governments, be it Indian or Pakistani that sharpen the contradictions among the people so that they remain divided. The US government for a long time has used both Indian-occupied as well as Pakistani-occupied Kashmir valley for breeding new terrorist outfits that plague the entire South East Asia, and one of them can very well be the faction responsible for the recent Dhaka attacks. However, the terrorist activities of the imperialist US in liaison with the Pakistani government must not be confused with the struggle of the people of Kashmir for their land and their freedom which is in the right and should be hailed as a legitimate struggle by people all over the nation.

It is the Indian government and its repressive army which plays to the tune of US imperialism knowing very well the plans of both Pakistan as well as the US, but still not acting in the interests of the people of Kashmir. The reactionary government of India does not act as the protector of the people of Kashmir but as the protector of US imperialist interests over the entire South East Asia and declares the real fighters of Kashmir as ‘terrorists’ to hide its own tyrannical face from the other states of India where the suzerainty of the central government is not challenged with as much rigor as it is done by the fearless and brave people of Kashmir.

People like Burhan Wani are not terrorists but militant fighters for the rights of the people and against the indignities faced by them. Their legitimate struggle, due to the terrorist interventions of the US-backed puppet regime of Pakistan as well as the CIA who indulge in skirmishes at the LOC unlike the rebels who wage armed struggles inside the state to create liberated zones, is met with repression by the CRPF and other forces deployed by the Indian government in the valley. The Indian government further blurs the line between foreign terrorists trained by the CIA and ISI and the indigenous militant fighters struggling for the right to self-determination of Kashmir to hide their inability to solve the contradictions within the state. As a result, popular movements wherein people participate in large numbers and women and children can also be seen amidst the crowd, are fired at by the Indian armed forces and Kashmiri activists like Afzal Guru and Maqbool Bhatt, who were hailed even by the parliamentary state parties as champions of the rights of the people of Kashmir, are hanged unjustly by the Indian judicial system to serve the interests of the Brahminical ruling classes and the Hindutva mob.

It is precisely this kind of total annihilation of the scope for political expression of the people of Jammu and Kashmir added to the ‘special status’ afforded to them that is largely favourable, like the reservation scheme, to the upper classes, that one can say that the problem has escalated to such a height that it cannot be solved peacefully, and to hope for a peaceful reconciliation will further add to the oppression faced by the people of Kashmir. The people of Kashmir have decided their fate, which goes against the interests of any and all regimes around it, and lies in the interests of the people and therefore their struggle is evidently relentless and has gathered mass support. Now it is upon us to take sides and since we are the people, we should take the side of the people of Kashmir against the regime of Indian state, because it is the people who make up the nation, and when the regime becomes a tyranny, it is not only rightful but inevitable that the people bring it down through waves of mass struggle.