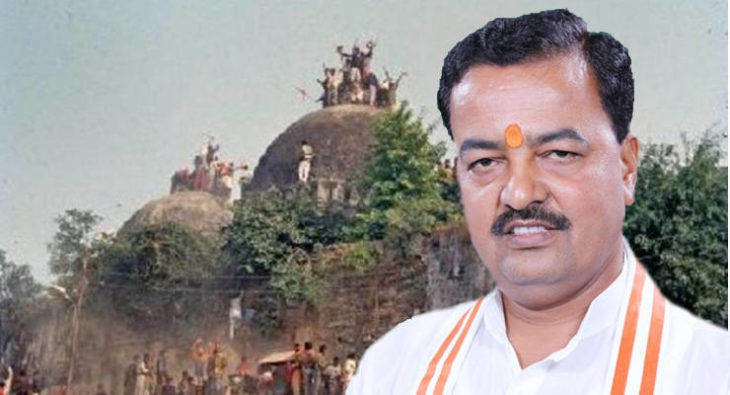 The Supreme Court ordered the political players to desist from playing religious or casteist cards during the elections a few weeks back. The aim of the order, according to various critical analysts is to place a barrier on the path of developing a caste and communal unity among the downtrodden and marginal communities, however, many hold the view that it will be a game-spoiler for the BJP during the high voltage assembly elections in five states. Evidence proved the latter wrong. Ram Temple is still hot as an issue.

The Bharatiya Janata Party Uttar Pradesh chief Keshav Prasad Maurya, a staunch Hindutva hate monger, followed the footsteps of the Hindutva venom spitters like Sangeet Som, Yogi Adityanath, Sakshi Maharaj and others, when he thumbed down the Supreme Court verdict by claiming that the BJP will build the Ram Temple at the spot where the RSS foot soldiers demolished the Babri Masjid in 1992.

A claim to build the Ram Temple, which is now an overused poll issue, is directly aimed at polarising the Hindu voters of the state under the umbrella of Hindutva force. Keshav Prasad Maurya said: “Ram Mandir is a subject of faith. It is not going to be built in two months. The temple will be constructed after the elections. BJP will come to power with a full majority,” Indian Express quoted.

Such an overt attempt to play the communal card will go unnoticed and escape any prosecution of the law due to the extensive support the Modi government has exerted to these brigade of bigots whose only issue in the Uttar Pradesh election is to polarise the Hindu votes to usurp power and pave the way for Rajya Sabha majority in the coming polls.

Even before playing the three decades old Ram Temple card, the BJP leaders spewed venom against the Muslim community in public meetings, especially in Western Uttar Pradesh, where a lot of BJP leaders are going to test their luck. The Uttar Pradesh population has a large section of Dalits, Backward Castes, and Muslims, who will play the crucial role in the elections.

In the past, the BJP used posters in which Keshav Maurya was depicted as the Hindu god Krishna arriving to save Uttar Pradesh from Mayawati, Akhilesh Yadav, Rahul Gandhi, and Owaisi. The posters created a ruckus in different regions of the state as they hurt the religious sentiments of the Hindu community and even a large section of the upper caste Savarnas, not attached with the RSS or the saffron camp, opposed the heinous marketing agenda.

The covert support that the Sangh Parivar and the BJP have got in its efforts to carry out communal polarisation from the local administration of the Uttar Pradesh government exhibits clearly that the ruling Samajwadi Party has a great stake in the rise of the saffron forces in the state. In its effort to unite the Muslim votes and split Mayawati’s Dalit vote bank the Samajwadi Party helped the BJP to polarise the Hindu voters since the last five years.

By playing the RSS card, the BJP has cleverly manoeuvred its saffron agenda in the polls, as being a “cultural organisation” the RSS is free to use religion to incite communal bigotry and hatred while keeping the BJP immune from legal prosecution due to the “autonomous” existence of both organisations.

The Election Commission and the courts cannot take suo motu cognisance against the saffron brigade due to the “official” demarcation line that differentiates the political party, BJP, and its ideological mentor and guide to action, “cultural organisation” RSS.

However, Keshav Maurya’s declaration of building the Ram Temple even crossed the arrangement the Sangh Parivar has made to differentiate between political critique and religious hatred mongering. By declaring that the BJP will build up the Ram Temple in Ayodhya once voted to power, Keshav Maurya did violate the Supreme Court order and most critiques of the BJP expressed doubts on whether the Election Commission will act against the BJP leader or his party.

It seems that the entire poll commission discipline is only applicable to those parties that are trying to prevent the rise of the BJP in its yesteryear stronghold Uttar Pradesh. The BJP’s bold declaration during the poll campaign promising the Ram Temple if voted to power is a sign that the Modi government is on one hand desperate to wrest control of Lucknow’s throne and on the other hand, has total disregard for the legal norms and court verdicts. This is a clear signal of the dangerous days that await for the people of Uttar Pradesh in the coming days.