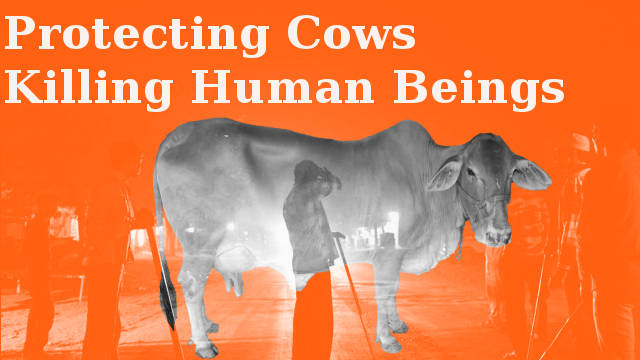 The notorious cow-vigilante of the RSS and its affiliates, known as Gau Rakshaks in Hindi, brutally murdered one and injured four Muslim men in Alwar district of Rajasthan. The Gau Rakshaks alleged that the men who were killed and injured by them were cattle smugglers and their violence is justified because the animals the victims were ferrying happened to be cows, the most precious living beings in the reign of Narendra Modi and his coterie of Hindutva terrorists.

The Gau Rakshaks were supported by the Rajasthan Home Minister Gulab Chand  Kataria, who is infamous for being a hardcore Hindutva supporter and a loose cannon of the RSS and the BJP. Gulab Chand Kataria denied that the Gau Rakshaks murdered the Muslim man by thrashing him publicly, but said as the victim, Pehlu Khan (55), died in a hospital a few days later, so it was not a case of murder. His insistence that the case is not of murder but simple vandalism will surely absolve the murderers by diluting the case and help the RSS affiliated criminals go scot-free.

Though the police filed a report of murder after the death of Khan, only three arrests were done so far at Behror, near Delhi-Jaipur highway, where the incident took place. The police also booked the victims who were carrying the cattle in six pick-up vans after buying them from a local cattle market. The police booked the victims under the Rajasthan Bovine Animal (Prohibition of Slaughter and Regulation of Temporary Migration or Export) Act after calling them cattle smugglers, following the allegation levelled by Kataria. Surprisingly, the RSS mentored government of Rajasthan never enacted any act to safeguard the lives of its minority communities or those from the ostracised Dalit and backward castes from the assault of the upper-caste Hindutva mob.

Gulab Chand Kataria was earlier accused by the CBI of being a partner in the murder of Sohrabuddin Sheikh, the case was diluted after Narendra Modi ascended to the helm of India. Kataria is also infamous for his unofficial support to the Karni Sena that vandalised the film set of Sanjay Leela Bhansali, he supported the vandalism at a Muslim restaurant by Gau Rakshaks led by the notorious Hindutva leader, Kamal Didi, a few days ago and ordered the police to book the restaurant owner and staff instead, under penal sections, rather than arresting the Gau Rakshaks; recently he came to highlight again for his misogynist comments about a gangrape victim of Bikaner. When men with such credentials handle the home ministry, things like law and order, justice, and impartiality goes for a toss.

In 2016, a feral mob of Hindutva supporters thrashed few Dalit youth in Una of Gujarat publicly, which gave rise to a nationwide outcry against the Brahminical fascism unleashed by the BJP. The anger of the Dalits caused severe trouble to the BJP’s poll prospect in Uttar Pradesh, where a sizeable amount of Dalits live and Narendra Modi was compelled by the RSS to woo them back to the fold of Hindutva, by criticising the Gau Rakshaks during his town hall. Modi played with his words and using his extremely cunning oratory skills, he managed to tell people that there are two types of Gau Rakshaks, one that serves and protects the cow, and the other that extorts money and resorts to hooliganism under the garb of cow protection.

During his programme in Hyderabad on 8 August 2016, Modi shed crocodile tears for Dalits and performed a high-pitched drama, calling the Gau Rakshaks to shoot him instead of hurting the Dalit community. On both occasions, the prime minister kept mum over the atrocities on the Muslim community by the same Gau Rakshaks against whom he was firing a selective salvo.

Rather, Modi used the example of Badshahs, who fought and won battles against Rajahs by using cows at the front of their men. It was a sub-layered hint, just like the shamshan vs kabristan pitching, where the prime minister used metaphors to depict the Muslims as villains of the past and also hinted that Muslims may be involved in the heinous crimes committed under the cover of cow-protection. A very clever whitewash attempt to conceal the crimes committed against the Dalits and minority communities by the comrades of Modi and his coterie.

If we assume that the prime minister was concerned about the hooliganism carried out by a group of men, who are somehow linked with the parent organisation and ideological mentor of his party, then will he and his party condemn the act of violence in Alwar by the same Gau Rakshaks against whom he amplified his tone eight months ago? Or is it the prerogative of being a sizeable vote bank in Uttar Pradesh that the ostracised Dalit community heard few lines of condemnation for the Gau Rakshaks from the prime minister before the elections and nothing such would ever be uttered again?

It would be infantile to wish such ardent followers of the RSS to uphold the law and order without discrimination or bias against any community, person, or political ideology. Gulab Chand Kataria and the entire cabinet of Vasundhara Raje rode to power on the Hindutva chariot and they are determined to milk the cow of Hindutva for political benefits, including the polarisation of the upper-caste Hindu voters throughout Rajasthan, which remains a state with skewed sex ratio, low literacy, high unemployment and declining farm outputs. By projecting an extremist Hindutva image of the state, the BJP is even going to cause a decline in the income from tourism in the coming days.

The impunity with which the Gau Rakshaks operate in the hinterland of Rajasthan, where medieval feudal structure, customs and practices still flourish unbridled, can be attributed to the immense support they get from the Brahminical-feudal administrative system that champions the cause of the Hindutva kingdom in the most unapologetic manner. Gau Rakshaks of Rajasthan are not only accused of murdering and beating people, but also of extorting money from businessmen indulged in the cattle trade, Dalit leatherworkers, butchers, and other people from oppressed communities on each and every occasion.

As a semi-governmental organisation, the Gau Rakshaks run their parallel administration throughout Rajasthan and they are the forward detachment of the RSS in its endeavour to incense the poor and unenlightened masses with the doctrine of Hindutva and turn them into the infantry of the saffron brigade.

To confine the politically unconscious working people as hostage under the domination of the RSS led Hindutva brigade, the Gau Rakshaks and other such frontal organisations of the Hindutva terror enterprise managed by Nagpur glorifies the notorious Brahminical practices and customs of the past, like the utmost patriarchal practice of Sati (burning alive of wife or wives of deceased upper-caste Hindu man with their husband’s corpse), and cover-up the atrocities unleashed upon the poor by the Rajput kings of the past and present.

Feudalism happens to be the principal enemy of the people of different erstwhile feudal kingdoms of kings and nobles who collaborated with the British colonial rule, now called Rajasthan. The patronage provided by the likes of Gulab Chand Kataria to these violent mobsters throughout the state makes Rajasthan an unsafe place for people who do not share the viewpoint of the RSS and the BJP. The Hindutva fervour is so strong in Rajasthan that it even compels the ailing Congress Party and other regional parties to toe its line.

Cow protectionism and Gau Rakshaks are the weapons in the hand of the BJP that helps its various governments to divert the attention of the people from its utmost failure in providing any relief to the common people and from its corporate servile nature. Thus Vijay Rupani can jail anyone for life if a cow is killed in Gujarat, but the killers of thousands of Muslim men, the rapist of numerous Muslim women, still roams freely in the state. Chhattisgarh Chief Minister Raman Singh can threaten people with death if they dare to harm cows, but will happily intensify the genocide of tribal people for the interest of the mining corporations that are drooling for the land and forests of the mineral-rich state.

The Gau Rakshak menace cannot be curbed by another party of the right-wing like the Congress, even if it ascends to power in Rajasthan, Gujarat, or Chhattisgarh. The problem is more deep rooted and cannot be resolved by soft Hindutva model. This menace can be dealt properly only when mass resistance can be built against it by arousing the workers, peasants, and other toiled people of the country and its cow belt. Such resistance movement should not only aim at throwing barriers before the Gau Rakshaks but must also aim to uproot the remnants of feudalism. This can only be achieved by transforming the existing production relations in these parts of India, i.e. through a complete democratic transformation of the society.

Only the collective struggle of the people can force these RSS sponsored Gau Rakshaks to retreat. Only by developing such movements against fascism, the progressive and democratic forces can uproot these fascist forces and transform the society and thereby transform the citadel of feudalism and patriarchy into a new hub of democracy and progress. As soon India reaches that very stage of democracy, the better it would be for the nation and its people.