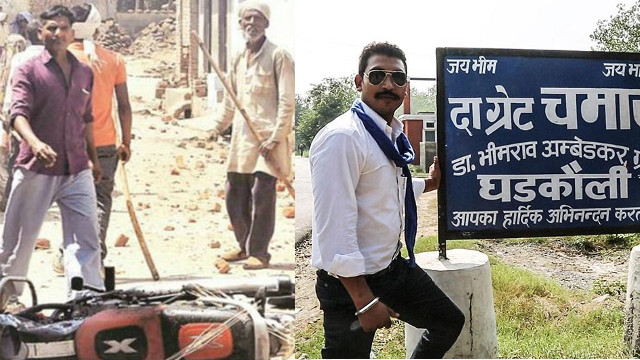 The Bhim Sena was called a “Naxalite outfit” and anti-national force by the BJP government and its ally, the yellow press, soon after it started leading the Dalits of Shabbirpur village of Western Uttar Pradesh’s Saharanpur district against the violence and rampage of the upper-caste Thakur men and the Brahminical Uttar Pradesh administration. The Bhim Sena’s unapologetic stance as a Dalit outfit and its reluctance to appease and mingle with the upper-caste elites irked the Yogi Adityanath government, which is now baying for the blood of this Dalit outfit.

Whenever in the history of Uttar Pradesh and Bihar the Dalits and the backward caste people tried to rebel against the injustices meted out to them by the members of the feudal landlord class, mostly from the Rajput Thakur caste, they were subjected to extreme repression and were subjugated by the Thakurs with brute force.

The upper-caste Thakurs have been killing Dalits with utmost impunity until now, but as soon as the Dalits stopped their aggression and casteist oppression by building up a massive resistance in Saharanpur, the Thakur community and the Brahminical administration began calling the Dalits and their organisation, “terrorists”, to tarnish the image of their glorious resistance against Brahminical tyranny.

The Dalits were not surprised, at least in Uttar Pradesh, after the state government tried to bully the Dalit resistance and force the men and women of the vulnerable and ostracised community to surrender their will to the supremacy of the upper-castes. This very government of the BJP, the party that left no stones unturned to woo the Dalit community under the umbrella of the Hindutva fascism before the crucial Uttar Pradesh assembly election held this year, unveiled its utmost Brahminical core to the oppressed castes of the state. Much to no one’s surprise.

The Shabbirpur Incident and its Aftermath

Shabbirpur has 29.37 per cent of Dalit population as per the 2011 census and the major source of income for most of the Dalit families is agriculture and casual labour. The village has separate quarters for the Dalits, who are considered extremely untouchable by the members of the Rajput clan, i.e. the upper-caste Thakurs, who live in a separate area and rarely visits the Dalit part of the village.

On 5 May, the Thakurs took out a rally to celebrate the birth anniversary of the controversial Rajput king Pratap Singh, who is a celebrated icon in the Hindutva camp. By playing extremely loud and lewd music, the rally of the Thakur community went towards the statue of the Rajput king to garland it, however, the rally had to pass through the Dalit part of the village.

While this raucous rally was passing through the temple of Saint Ravi Das, one of the most revered figures worshipped by the Dalits, the community members asked the Thakurs politely to lower the volume of the loud music played by them. The Thakurs refused to heed any advice and carried on with their rally, to which many Dalits objected.

Their objection irked the privileged upper-caste feudal men who resorted to violent rampage throughout the Dalit part of the village and ransacked the temple of Ravi Das as well. The Thakurs chanted the slogan that the government of the country – “belongs” to them and thereby they are immune from the law. The villagers called the police, but to no avail, as the administration refused to act against the upper-castes to save the ostracised community.

Repeated pleading by the elder members of the Dalit community before the rambunctious Thakur mob didn’t help, as the latter peed inside the Ravi Das temple, desecrated the idol of the saint and ransacked the temple. When the Dalits started resisting the aggressive Thakurs, the latter torched the Dalit houses, attacked their cattle, molested their women and wounded many children. The Dalit resistance also grew intense in response to the unbridled rioting by the Thakurs, most of whom are, as per the residents of the village, workers and leaders of the ruling BJP.

In the resulting skirmish, one of the goons from the Thakur community, Sumit Rajput died an accidental death, which aroused the temperament of the feudal landlord community. The Thakurs, now with the mute spectator police force acting as onlookers, started torching Dalit houses and started hunting for Dalit men and women. It was only the strong resistance by the Dalits that kept the Thakurs at bay and later forced them to retreat.

More than 25 Dalit houses were burned down by the goons of the Thakur community, who wanted to teach the Dalits a lesson for standing up against Brahminical hegemony. The Dalit men were forced to flee the village when the police force joined the Thakurs and helped them in carrying out the arson in the area. A combing operation was launched by the administration to only hunt down the fleeing Dalit men and more than 22 people were arrested by the police on false charges of rioting.

The unbridled rioting with the help of the state machinery once again proved to the Dalits that the Brahminical administration led by a Thakur like Yogi Adityanath, infamous for his bigotry and venom spitting, will not help them in any way to resist the aggression of the upper-castes. The Dalit people had to look up to the Bhim Sena, the centre-right organisation that had some links with the BSP in the past.

The Bhim Sena’s participation in the movement turned it into a vigorous and a militant struggle and the Dalits fought pitch battle with the Brahminical administration on the streets of Saharanpur. The violence that was unleashed by the state machinery, was resisted by the Bhim Sena volunteers and the vigour with which the Dalits carried out their anti-Brahminical movement, raised hopes among the downtrodden and oppressed Dalits of Uttar Pradesh, but caused a severe migraine to the Uttar Pradesh government and the RSS, which is working hard since years to bring the Dalits under the Hindutva umbrella and use them as pawns against the Muslim community during communal carnages.

With their intense resistance struggle, the Bhim Sena and the Dalits of Saharanpur doomed the RSS’ efforts to wean the bigger blocs of the non-Jatav Dalits to its camp. They stood strongly united against the lucrative baits of the saffron camp to disintegrate the struggling people. Yogi Adityanath’s government took the final measure it could, to desist the Dalits from joining the Bhim Sena. It started calling it a “Naxalite” and “terrorist” organisation.

There is a deep conspiracy that’s flowing as an undercurrent in the agenda of the Uttar Pradesh government in its fight against the Dalit community. The Chief Minister held high-level meetings with the top bureaucrats of the state on the issue of Saharanpur and since then the police has launched a witch-hunt against the Bhim Sena and is treating it as a terrorist organisation, without carrying any substantial evidence to prove its allegations.

The arrests and the repression laden on the Bhim Sena is a desperate measure by the government of the Yogi Adityanath to portray the Dalit struggle in the darkest hues to prevent the erosion of the BJP’s own Dalit vote bank that it managed to poach from the BSP. As it will be hard to deal with the Bhim Sena or the Dalit community over a political battle, the Uttar Pradesh government has chosen the most nefarious path, the path of vilifying the political struggle of the Dalits.

Nine months ago, Prime Minister Narendra Modi went on a weeping mode during his Hyderabad tour and boldly called upon those (allegedly men belonging to the saffron camp who were thrashing the Dalits in the name of cow protection) who were attacking the Dalits to shoot him instead and spare the Dalits. However, as the violence against Dalits is going on unhindered right beneath the nose of New Delhi now, Modi seems to have hibernated, as no more concerns regarding the safety of the Dalits was heard from him since the violence unfolded in Saharanpur.

The BJP is keen to retain its Dalit vote bank in Uttar Pradesh, where the Dalits form a very large voter base and it is trying hard to get the Bhim Sena out of the Saharanpur incident to plummet the Dalit resistance struggle in the state. There will be no dearth in the activities of the RSS in transforming the Dalit vs the Rajput battle into a Dalit vs Muslim, and after some time, a Hindu vs Muslim battle and gain some energy shots from such communal issues.

For the BJP, Western Uttar Pradesh is a crucial region, especially Saharanpur, which is close to Muzaffarnagar, where the party instigated a pogrom against the Muslim community by using fake and deceitful propaganda on social media. The enmity between the Dalits and the upper-caste Thakurs will be politically dangerous for the poll fortunes of the party in the region where it won a major victory following intense vitriol-filled campaigns against the Muslim community to unite the Dalits under the Hindutva umbrella. It will be trying hard now to ensure that the attention of the Dalit community is diverted by stirring up communal tension between the minority Muslims and the Dalits.

Under such circumstances, it’s imperative for the Dalit people to remain vigil against the conspiracies of the Hindutva brigade and the Dalit activists will have to put in a lot of effort to reunite the Dalit community against the Brahminical ruling clique, so that they can carry forward the struggle against Brahminical hegemony and caste apartheid in the heartland of Brahminism-based feudalism.

The struggle of the Dalits in a Yogi Adityanath led Uttar Pradesh will act as a beacon of hope and aspiration for the democratic and progressive forces at a time when the BJP/RSS and its government is looking extremely unbeatable. The Brahminical administration of Yogi Adityanath and the BJP will certainly fail in the long-run to stop the struggle of the Dalits, if the spirit of Saharanpur is protected from all assails and the Dalits participate en-masse in an uncompromising struggle against the Brahminical caste apartheid without getting bogged down by the allegations levelled by the government against the Dalit people’s organisations.