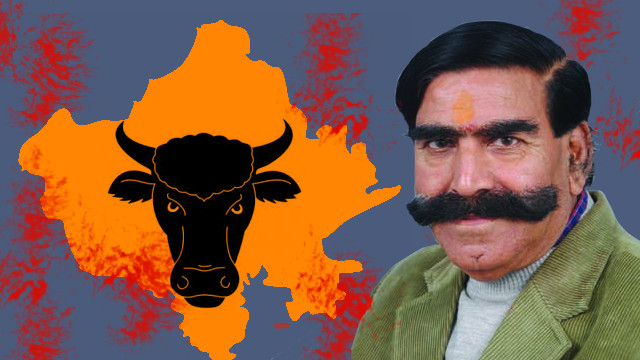 BJP has a really long list of Hindutva hate mongers and there is rarely any leader in the party who doesn’t act like a knicker -clad lemur of the Hindutva fascist RSS during public discourse. Apart from the serial hate mongers and rioters, the BJP also has Gyan Dev Ahuja, who is known for his unique ability to count and come up with an estimation of monthly condom usage in JNU hostels and also the number of beer bottles that lie shattered near the trash bin.

Now Gyan Dev Ahuja, who is also an MLA from Ramgarh in Alwar, is eyeing to be the MP of Alwar and in his bid to beat other contenders for the seat in Rajasthan, where Hindutva fascist killers are deified, glorified and rewarded, he proclaimed that it’s not bad but a ‘Karma’ to kill those who smuggle or slaughter cows. Which can be translated as – it’s cool to kill Muslims if you have a cow to use as an excuse.

Rajasthan is the slaughterhouse for the Muslim community; a state where the Muslims are targeted and then lynched by the Hindutva fascism-incensed mob with state support. In 2017 itself the killing spree started with vigour after Pehlu Khan, a dairy owner of Haryana, was lynched by cow vigilante Gau Rakshaks, led by the Hindutva fascist Bajrang Dal in broad daylight on the National Highway.

Several more Muslims were killed in Rajasthan by the Hindutva fascist goons in 2017, the latest being a migrant worker from West Bengal, Afrazul Shaikh, who was murdered by a man called Shambhulal Regar, the brutal killing was recorded along with a political speech of Regar expressing his allegiance to the Modi regime.

Shambhulal Regar has become a celebrity in the Hindutva circles and to secure his release a mob of few thousand men defied curfew, attacked the police, seized control of the Udaipur Court (surprisingly looks like a temple) by force and then hoisted the saffron banner of the RSS atop by throwing off the tri-colour that the Modi regime use extensively in its pursuit to peddle jingoism.

Gyan Dev Ahuja is a product of the hate monger factory of the RSS, where he was manufactured with precision and his political career now revolves around protecting his feudal domination and building a criminal empire by forging a strong alliance of the criminals, builders, mafia and Hindutva fascists in and around Alwar and Ramgarh.

It’s not surprising that Gyan Dev Ahuja, proud of his patriarchal and feudal roots and upper-caste privileges, will unabashedly call for the mass murder of Muslims under the pretext of saving cows. However, what is surprising is to see the tepid and very predictable reaction of the opposition forces, including the self-styled ‘radicals’, the parliamentary left and those who swear allegiance to ‘social justice’ by divorcing the issue from its economic root cause.

There have been mundane protests and quotidian criticisms against the remarks of Gyan Dev Ahuja. Few media houses expressed shock on the remarks of Ahuja as if no one had ever heard the RSS men talking violence. None of the protests could reach out to the people and help to build up a mass resistance against such Hindutva hate mongers and their bootlicker henchmen.

Civil rights groups and ‘Ambedkarite lefts’ expressed interest in organising an event in Delhi, in front of the Bikaner House, to handover a tri colour and a copy of the Constitution to Vasundhara Raje and request her to follow the letter and spirit of the Constitution while running the government. We are told that it’s not very surprising to expect a ruling party and its chief minister cracking whip on those who help them to ascend to power every five years.

A look into the history of the state and its socio-economic and political reality will tell us that this wish of the ‘Ambedkarite’ forces are sign of them being quite sanguine over the prospect of achieving their goal of converting the Hindutva fascist forces into meek sheep using “democratic discourse” that the fascists loathe and despise.

Rajasthan, in its present form, is formed by merging several reactionary kingdoms of Rajput kings after the British handed over the baton to the Indian ruling classes. These kingdoms of extremely feudalistic and reactionary monarchs, who served the interest of the British colonial rule with extreme loyalty, were united under the Indian Union by giving a greater share of power to these erstwhile monarchs.

Only those who hail from the royal families, Kshatriya caste or royal lineages are allowed to rule Rajasthan in the sham democratic setup, which conceals the utmost feudal and reactionary nature of Rajasthan’s politics. Rajasthan happens to be the state where the minority Kshatriya and Brahmans, along with few feudal OBCs hold their sway over the state’s resources and political power, while the Dalits, Muslims, Christians and tribal people are kept away from the economic resources and political power.

The workers and peasants movements in Rajasthan face the brute repression unleashed upon them by the state machinery, manned by the upper-caste feudal elements. Even mass movements led by the pacifist and extremely parliamentary CPI(M) face severe repression from the Vasundhara Raje government. Several student activists had been hounded by the state in the past for dissenting and trade union movement is violently curtailed by Vasundhara Raje and her accomplice, Gulab Chand Kataria.

With the formation of the Modi government, which fuels the dream of establishing a Brahmanical despotic rule all over the country, making it look real and near, the Hindutva camp has got rejuvenated and it has influenced a large number of Hindu upper-caste feudal landlords, rich farmers, urban and rural elites and a large section of the jobless, backward caste men, who form the bulwark of reaction in Rajasthan to work under its command against the microscopic Muslim community in the state.

A rampant growth in the Hindutva fascist camp, of which Gyan Dev Ahuja is an integral part, has been possible in Rajasthan due to the legal immunity offered to the fascist stormtroopers by the Vasundhara Raje and the Modi government and due to the absence of any strong people’s movement against the feudal landlords and their patriarchal rule in the state.

The ilk of Gyan Dev Ahuja or Shambhulal Regar cannot be defeated and ousted from feudal strongholds like Rajasthan unless there is a conscious effort by the revolutionary, democratic and progressive forces to build up anti-feudal struggle by engaging the poor and landless peasants.

An anti-feudal struggle led by the poor and landless peasantry to seize political power and to overthrow the rule of reactionary feudal-patriarchal rule of the upper-caste feudal landlords, monarchs and Hindutva fascists can change the political reality of the state and bring radical changes, especially through land reforms and formation of local self-government of the peasants and workers at the grassroots level.

This future is what the Hindutva camp under the leadership of Narendra Modi, Vasundhara Raje, Gyan Dev Ahuja or Shambhulal Regar wants to stall to prolong the slavery of the poor and landless peasantry, the economically oppressed Gujjar community, the politically cornered and economically deprived section of the Jat community, the oppressed Muslims and tribes like the Bhils, Minas, etc.

To alter the prevalent socio-economic and political equation in Rajasthan, which helps the ilk of Gyan Dev Ahuja to survive and grow into feral mob, such massive revolutionary anti-feudal struggle is required at this moment to provide obstinate resistance to the feudal, upper-caste, patriarchal rulers of Rajasthan and their Hindutva bootlickers and to establish a free, democratic and progressive rule where all communities can live in peace and harmony and the poor can free themselves from the shackles of exploitation.

To gift an utmost feudal and patriarchal chief minister with a Constitution and rest hope on her goodwill, instead of building people’s struggle for democracy, amounts to living in one’s fantasies and, moreover, in certain circumstances, can be termed as an act of treason. As such acts will help the feudal landlords and upper-caste rulers to consolidate their rule and breed more fascist lynch mob kingpins like Gyan Dev Ahuja.