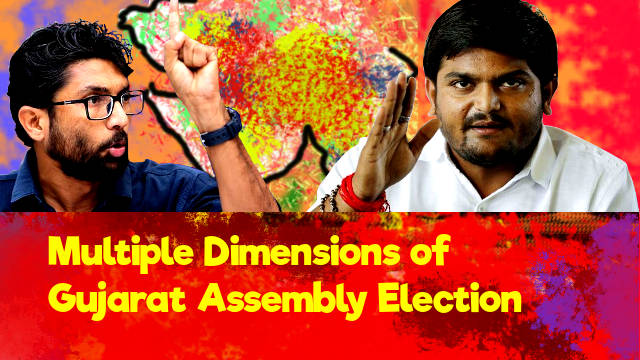 The narrow victory of the BJP in Gujarat and its bagging of Himachal Pradesh from the control of the Congress will provide a breather to the RSS-led Hindutva fascist camp for the time being, however, the massive mass discontent that became visible in the citadel of Amit Shah and Narendra Modi, signalled that all is not good for the saffron party at the place that it calls its bastion.

Though the BJP increased its vote share in the Gujarat assembly election in 2017 and got 49.1 per cent of the votes from 48 per cent of votes in 2012, it fell short to even reach its 2012 tally of 115 seats and was stopped at only 99, forget the ambitious goal of 150+ seats that Amit Shah set as target for the Hindutva camp.

The Congress, on the other hand, increased its vote share by more than 2 per cent and got 41.4 per cent of the vote share than 39 per cent in 2012. The Congress meanwhile won 16 more seats, including the crucial Patidar-majority and farmer dominated seats of Saurashtra, where the PAAS movement of Hardik Patel helped the party to sweep the traditional seats of the BJP.

The Dalit leader and agitator Jignesh Mevani, who rose to fame following the agitation against the Hindutva camp after the Una incident where Dalit youths were flogged by the RSS-affiliated cow vigilantes, too won from the Vadgam constituency with the support of the Congress and his alliance helped the Congress to garner the support of the Dalit community in other constituencies as well.

The best outcome of the assembly election result has been the resurgence of a discussion over the requirement of secularism and communal harmony in Gujarat, the topic that the Congress escaped very delicately to consolidate its Hindu upper-caste vote bank, which is so much intoxicated with the venomous Hindutva bigotry that any mention of the plight of the Muslims in the state, where apartheid against the community is officially endorsed, would mean a severe backlash during elections.

It’s known to the Congress that the Muslims of Gujarat have no choice but the Congress because of two reasons, firstly, the polarisation of the political space between the BJP and the Congress, which makes Gujarat elections a bi-partisan affair, secondly, by carefully delimiting constituencies in such a way that the Muslim community cannot become a difference maker in any of them, Narendra Modi, during his tenure as the chief minister of Gujarat, ensured that all elections in Gujarat can be won by wooing the majority community only.

This severe Hindu-oriented election in Gujarat made it mandatory for all stakeholders to subscribe to Hindutva. While Rahul Gandhi was proud to show-off his Brahminical upper-caste Hindu roots to woo voters, the BJP was busy in linking the roots of Gandhi and his family with the Mughals and Muslims to hype xenophobia and milk the bigotry prevalent among the upper-caste Hindus of Gujarat to win their support in favour of Modi and his sycophants.

After the polls, the yesteryear Hindutva fanatic Hardik Patel, who once claimed that the Muslims can live in India only if they swear their allegiance to the nation like APJ Abdul Kalam, declared that he is taking the lead to build bridge between the Patidars and the Muslims by calling out the majority Hindu community to “reach out to Muslims” and remove mistrusts to build up communal harmony against “Narendra Modi’s divisive politics”.

This surprising volte-face of the Patel leader, who became a game changer in the 2017 Gujarat assembly election, is a major jolt to both the secular-democratic forces as well as the Hindutva militant organisations headed by the RSS and the Gujarat government.

Though an invisible Congress hand is doubted behind Hardik Patel’s move, who represents  the class interest of the dominant section of the feudal landlord class and rich farmers of the state, the move itself worths praise, as it has the potential to change the communal arithmetic that the BJP has prefixed for Gujarat as a template to win elections.

Dalit agitation leader Jignesh Mevani is using his Congress-supported victory from Vadgam, a traditional Congress seat, to  Dalit campaign in Gujarat that will support the Congress in the 2019 Lok Sabha election, when Modi will try his luck the second time to become the prime minister of the country.

Jignesh Mevani is helping to draw the support of the Dalits for the Congress and keep them away from the revolutionary left-wing politics that calls upon the Dalits, who are mostly landless, to intensify their struggle for land rights and political power from the grassroots.

The subtraction of Dalit votes from the unified Hindutva vote bank, building which took decades of campaigning and massive pogroms organised by the BJP and the RSS, will not only mean electoral catastrophe for the BJP in the future elections at those places where the Dalits are in majority, but it will also mean that the RSS will lose a considerable part of its Hindutva fascist foot soldiers, who are deployed to carry out the goriest atrocities on Muslims and Christians.

For centuries the Dalits remain confined within the exploitative socio-economic framework in which the community is, on one hand, considered extremely unclean and hence, is ostracised from the caste Hindu society, on the other hand, the community is considered extremely important as a source of cheap and sometimes free labour for the feudal landlords, and the Dalits are also required to hype the Hindu count in the country, to act as the henchmen of the Brahmanical Hindutva camp during communal pogroms and genocides.

If Dalit leader Jignesh Mevani can erode the Dalit base of the Hindutva camp in Gujarat by his political campaigns, then it will seriously hammer the pillars on which the Hindutva camp strongly stands in the laboratory of communal polarisation. However, it will still keep the Dalits at bay from pursuing their anti-feudal goal of winning power at village levels and to get land rights.

The above two possibilities in Gujarat politics, the building of trust and harmony between Hindus and Muslims and the separation of the Dalits from the Hindutva camp, will certainly have positive effects on the state’s social and political equations and can definitely harm the prospects of the BJP in the long run. However, the point over which both of these propositions are themselves becoming vulnerable is – the question of an alternative socio-economic equation.

While Hardik Patel and Jignesh Mevani could pinpoint some of the crucial factors that embolden the BJP and help it sweep elections in Gujarat and elsewhere, they miss out the point that how they plan to change the prevalent socio-economic order that breeds Hindutva fascism and the elements vital for its existence. These two leaders and their Congress controllers have no answers on the alternative model of economy and society that can sustain a secular, progressive and truly democratic system.

Under the Congress and the BJP, the neo-liberal economy thrives, which helps the big foreign corporations to partner with their Indian crony and comprador lackeys like Tata, Ambani, Adani and other groups. The evil nexus thus formed gradually expands its control over all aspects of the economy, and with the help of the feudal landlords, who are buttressed by these corporations and comprador capitalists, the resources like land, rivers, mineral reserves and labour of India are exploited by greasing few palms.

The nexus of the big foreign monopoly and finance capital, the comprador and crony capitalists, the feudal landlords and the corrupt and inefficient bureaucracy breeds the Hindutva fascism, as it’s a lethal weapon that helps the evil nexus to secure their hold on the country and its means of production.

Gujarat is no exception, especially when the tribal people and Dalits are severely exploited and oppressed by the feudal landlords from Brahmanical upper and middle-caste Hindus. Gujarat apart from being the bastion of Hindutva fascism is also a battlefield where the peasants and the landlords, the farmers and the government-corporate nexus, the tribals and the government clash regularly.

The support that the feudal economy and the feudal landlords receive from the comprador capitalists and foreign corporations strengthen their grip on the rural population and make the feudal landlords the vote vending machines for the BJP. By using caste loyalty and kinship, the feudal landlords have enslaved the poor and landless peasantry and kept them aloof from any form of revolutionary democratic struggle that can threaten the total uprooting of feudal domination and its caste system.

The Congress’ existence depends largely on the prosperity of the feudal landlords, comprador capitalists and the foreign corporations, who fund it and support it at times when the people grow angry with the BJP. The Congress and the BJP act as each other’s substitute and they dupe the people jointly, which must not be surprising for either Hardik Patel or Jignesh Mewani.

Congress and the BJP supplement each other and no anti-fascist force can bring any real transformation in India until it aims at hitting the feudal roots of the Indian economy and the politics that protect feudalism from the peasantry. Only by demolishing the feudal base that the Dalits and tribal people can achieve social liberation as well as the minority communities can free themselves from the communal bigotry they are subjected to.

How well the task of breaking the feudal structure of the society is executed in the coming days will depend on how much success the progressive and democratic forces achieve in uniting the poor, the working class and the peasantry against the feudal landed aristocracy, the comprador and crony capitalists and their foreign corporate masters. The moment a formidable unity is founded the BJP and the entire Hindutva fascist camp will be forced to count its days in Indian politics. As the unity of the people and their revolutionary struggle for democracy is the perfect antidote for Hindutva fascism.