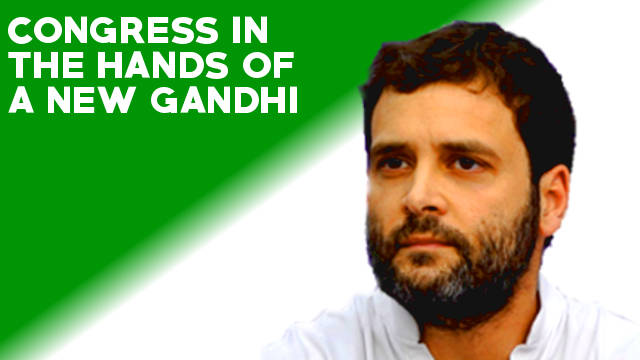 The Congress was pronounced dead post-2014 rise of Narendra Modi, the fascist tyrant who is set to rule India, along with his coterie of RSS-trained hardcore Hindutva fascists for decades to come. The resurrection of the Congress Party and the glorification of its present and past leaders, especially of the new party chief – Rahul Gandhi, is now happening, not under the guidance of the Congress High Command in a newspaper like National Herald, rather  in the propaganda of those who call themselves liberal and democrat, those who swear allegiance to oppose Hindutva fascism and all other form of fascism. These forces are today shedding their political commitment to democracy and progressive values in lieu of resurrecting the Congress Party from the doom it was cast into by the high tides of anti-incumbency that rocked the country since 2012.

The Gujarat assembly election is now a platform where all democratic forces and opponents of the Narendra Modi-led political forces are casting their aspiration upon the Congress to rescue them from the 22-year-long fascist reign of the BJP. From the upper-caste Patidar movement representative like Hardik Patel to the self-styled leader of the ostracised and oppressed Dalit community – Jignesh Mevani, everyone, who are keen to fight the BJP in its stronghold Gujarat, the terrain of Narendra Modi and Amit Shah, are now joining hands with the Congress Party and making it strong to take on the Modi-Shah-Rupani clique in the foremost laboratory of Hindutva fascism.

But the Gujarat assembly election became noteworthy only because the Congress was supported by the opposition forces, including a section of progressive democrats, pseudo-left and the self-styled progressive forces, who are trying to depict the Congress as a crusader against Hindutva fascism and a harbinger of secularism in India, especially in Gujarat. The image makeover of Rahul Gandhi, his jibes at Narendra Modi, the mainstream media’s full scale coverage of Mr Gandhi’s assertion over his Hindu identity and his desperate attempts to woo the upper-caste Gujarati Hindu elites and middle-class by continuously visiting temples and mutts in the state where the Hindutva fascists have subjugated the Muslim community through large scale genocides, like the one of 2002, to secure their power base, i.e. the polarised Hindu community, shows the nadir that the so-called secularist Congress has stooped to and how it cunningly use soft-Hindutva to secure the Hindu vote bank that it accuses its opponent group of using. Rahul Gandhi’s sudden frenzy over temples and Hindu religion has become joke-fodder in the poll-bound Gujarat, where the people will say that the Congress’ desperation to seek upper-caste and OBC Hindu votes has forced the BJP to seek the votes of the Muslims and Christians.

More than a contest between the Hindutva fascist BJP, led by the Narendra Modi-Amit Shah clique, and the broad anti-fascist front of the progressive and democratic forces, the Gujarat assembly election has now become a fight between two facets of the same coin, the two heads of the same snake. The incumbent BJP and the opposition Congress, both of whom diligently and earnestly serve the greater interests of the foreign monopoly and finance capital-owned corporations and their Indian comprador and crony allies are identical except for their hues and the intensity of their Hindutva tonality. It’s due to their acute political myopia and the predominance of sheer opportunism within that the parliamentary opposition has joined ranks with the Congress to overthrow the BJP regime when the Congress can offer no real difference in governance delivery than the BJP because of its allegiance towards the same set of masters — the foreign and domestic corporate capital.

The Patidar leadership, consisting of the extreme feudal elements from the dominant caste groups, and the oppressed Dalits, who are severely exploited and ostracised in the Hindutva heartland of Gujarat are now roped-in to support the Congress’ aspiration to beat the BJP in its own game at its home turf. However, this hodgepodge arrangement, by elevating the Congress to the pinnacle of opposition forces, when it doesn’t at all represent the hope and aspiration of millions of workers, peasants, tribal people, oppressed minority communities, the Dalits and the backward castes persecuted under the draconian caste system. The Congress neither represents the interest of the poor people who are reeling under the juggernaut of the neo-liberal economic cavalcade that the party pioneered in India nor it has any real capability to fight and defeat the forces of communal fascism due to its complicity in its rise.

Rahul Gandhi, and for that matter the entire Congress Party’s rank and its leadership, is now projected as “centre-of-left” liberal political beacon carrier, while in reality, the rule of the Congress had been equally, and sometimes more gruesome, than the rule of the BJP since 1947. While the BJP openly professes its allegiance to the flag of Hindutva and the ideology of Savarkar, the Congress Party plays the soft-Hindutva card wherever it has to garner mass support by polarising the people on communal lines. Atrocities, massacres and genocides are in the DNA of the Congress party, which calls itself the torchbearer of non-violence. From the massacre of thousands of left wing activists in massacres like Cossipore-Baranagar of 1972, under the supervision of Siddhartha Shankar Roy, the Man-Friday of Indira Gandhi, from the massacre of thousands of Sikh devotees in the Golden Temple of Amritsar during Operation Blue Star, carried out under the command of the British intelligence agency SIS, to the  genocide of Sikhs in Delhi and other parts of India in 1984, soon after the assassination of Indira Gandhi, shows the monstrous character of the party, which still holds the culprits of that period in high esteem.

Rahul Gandhi is going to lead a party, whose government under his father, a strong Hindutva hate-monger, opened the gates of the Babri Masjid and set the dice rolling for the destruction of the 15th-century mosque in 1992 under the nose of a Congress government in New Delhi. That very Ram Janmabhoomi movement helped the BJP and other Hindutva forces to carry out communal carnage throughout India and massacre Muslims en masse to erect a new purported enemy before the psychic of the majority Hindu community – the Islamist terrorist. It was the Congress that brutally suppressed the people’s democratic aspiration for freedom in Kashmir, Nagaland, Manipur, Mizoram and other parts of the country. It was Rahul Gandhi’s sycophants like the World Bank-deputed former Indian Prime Minister Dr Manmohan Singh and P. Chidambaram, who played a crucial role in signing up numerous MoUs with the foreign and domestic corporations to sell-off the mineral and natural resources of India at a throw-away price and to realise these vile goals of their corporate masters, these leaders, whom the so-called liberals hail as “liberal” and “democratic” at present, launched the largest war in the history of the country against the tribal people to evict the latter from their forests and villages.

The notorious Operation Green Hunt, which the Modi government intensified, has killed hundreds of tribal people, devastated numerous villages and sexually oppressed the women to subjugate their struggle to live their life with dignity under the jackboots of the corporate-crony-feudal nexus. Rahul Gandhi and the Congress leadership cannot wash-off its hands from the crimes it has committed against humanity, against the interest of the nation and against the people of the country even after uttering millions of couplets bashing Narendra Modi and his brand of Hindutva politics. Rahul Gandhi and the Congress can’t absolve itself of the crime it has committed by deploying heavily armed troops, licensed to massacre and rape tribal people in Central and Eastern India to evict them forcefully from the very land and forests that these people have lived since generations and protected as their asset. The Congress Party cannot erase the fact that the heinous mass murderers like Mahendra Karma led the organisation in the conflict zone of Chhattisgarh and supervised some of the gruesome crimes committed against humanity in the recent times. The Congress Party can’t demand redemption at the church of the people anymore after what it did for seven decades.

Desperate to win power, the Congress and Rahul Gandhi are now attempting to deceive the people by raising a sham banner of secularism during the Gujarat election at a time when the party’s track record in the state shows no sign of any struggle in favour of secularism during the last 15 years. To appease the utmost reactionary upper-caste Hindu elites, the comprador and crony capitalists and feudal landlords of Gujarat, who form the core support base of the Hindutva camp, Rahul Gandhi is now asserting his Hindu identity and showing his allegiance to the religion in a similar fashion that a hardcore RSS-trained hoodlum joining the BJP’s rank will do. The party, whose rule oversaw numerous riots throughout the country and the party that used riots to farther its own political potentials, like the BJP, won’t make any difference even if Rahul Gandhi and the Congress Party wins the Gujarat assembly election by chance.

The democratic and progressive forces that intend to really build up a nationwide anti-fascist struggle to overthrow the Narendra Modi-led BJP government and establish a democratic, progressive and secular people’s government instead should understand that contrary to the claims made by the opportunist parliamentary left, the Congress is a reactionary and utmost fascist organisation that can’t be differentiated in content, except for the shell, with the BJP and thus, it can’t be a true partner towards achieving such a broader and progressive goal. The transformation, be it in Gujarat or in India, can be brought by building up people’s movement for democracy from the grassroots by uniting and organising the workers, the peasants, the toiling people, the youth and students, the oppressed communities and all progressive anti-fascist elements under one common patriotic, anti-fascist and democratic banner. Opportunism and desperation to win electoral victories by hook or crook will only harm the prospect of a total anti-fascist revolutionary struggle of the people. The elevation of Rahul Gandhi to the position of Congress chief will not change the party’s class character and the Congress will inevitably betray the very people who will elect it to power like the BJP does, and therefore, both of these forces and their lackeys should be purged from the Indian political stage by the people.