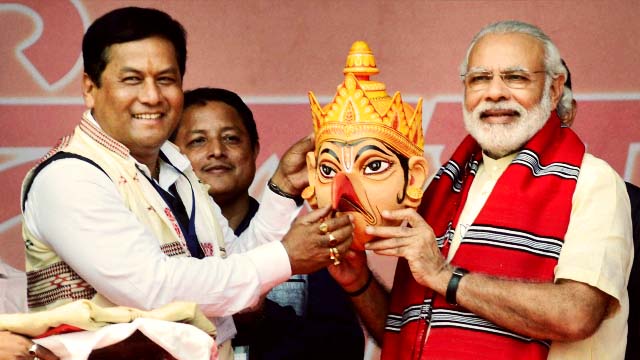 By filing a police complaint against West Bengal Chief Minister Mamata Banerjee, the BJP-led communal fascist government of Assam showed the intolerance towards dissent that the Hindutva camp and its lackey bureaucracy suffers from. Even meek criticism from a fellow right-wing politician is considered as a threat to the Hindutva empire by the rulers and hence police and state repression is sought to tackle the opposition from a parliamentary opponent. Forget about the people’s dissent or the fate of people like Akhil Gogoi, who are incarcerated en masse by the apartheid regime of Sonwale under draconian laws like the NSA, at a time when even the neighbouring state’s chief minister isn’t spared from police action by the BJP.

Mamata Banerjee didn’t threaten the Assam government with any revolution; rather, she expressed her anguish, fake it may be, over the forceful eviction drive to be started by the Sonowal regime against the poor Muslim people of Assam using extreme jingoism and xenophobia as the government closed the citizen verification drive under the National Register of Citizens (NRC) on 31st December and started printing draft lists using selective data, which, activists allege, will drop the names of the Muslim people of lower Assam en masse. It’s suspected that the BJP will throw away 13 million Muslims from Assam using brute force in the coming few months.

Assam has a violent history of anti-Bengali pogroms since 1948. The large-scale, state-sponsored anti-Bengali riots targeting Bengali-speaking Hindus and Muslims resurfaced in 1960 when the Bongal Kheda movement was started by the Akhomiya chauvinist organisations that were close to the Congress Party and supported its anti-communist and anti-China war plans.

The state experienced the most horrendous massacre of Muslim Bengalis, who were stamped as Bangladeshis or Bhatia by the Akhomiya chauvinists since 1980s when the anti-communist forces aligned to form the All Assam Students Union with the support of the RSS and the fundings from the CIA. Brutal massacres like the Nellie massacre of February 1983, in which more than 10,000 Muslim Bengalis were killed, were incited by the certified hate monger of the Sangh Parivar and the BJP’s founder Atal Bihari Vajpayee.

Since entering the state, the RSS kept inciting the Akhomiya community against the Bengali Muslims while converting a majority of the tribals to Hinduism and changing the state’s demography. After the formation of Bangladesh in 1971 and with the consolidation of power in the hands of fascist Indira Gandhi, the RSS was able to transform the Congress Party’s anti-communist anti-Bengali hate campaign into anti-Bengali Muslim campaign and gave it a dastardly communal colour. Apart from the Bengali-speaking Muslims, in the course of few decades, the Assamese Muslims were also targeted by the vitriol of the Hindutva camp.

While the BJP is now giving citizenship to the Bengali Hindu migrants in Assam, by calling them persecuted Bangladeshi Hindus, the Muslims face the wrath of the apartheid regime of Hindutva fascist Sarbananda Sonowal. The BJP knows that by disenfranchising the legitimate Muslim voters, both Akhomiya-speaking and Bengalis, from the electoral roll, they can gain a communal hegemony in the state that has the second-highest Muslim population after Jammu and Kashmir.

Muslims are 34.22 per cent of the Assamese society and therefore they pose a serious threat to the political hegemony of the BJP in the state, where, though the RSS has deeply entrenched its roots among the tribal people to build up a strong support base for the Hindutva camp and for the Hindi language, it still has to depend on xenophobia to win elections.

The Bengali Hindu immigrants, especially the Dalits, from Bangladesh are lured with citizenship rights and money by the BJP. The India-Bangladesh border is kept porous for the Hindu Bengalis coming from Bangladesh into Assam and other North Eastern states to increase the vote bank of the BJP. The Modi government’s absolute majority in Delhi is helping the BJP in these areas enormously.

The NRC exercise to update the citizen records used the most faulty techniques to determine citizenship, where the onus of proving citizenship felt on the people, mostly poor, hapless and uneducated Muslim people. It’s a draconian measure undertaken by the bigotry-filled and utmost communal Sonowal regime. Earlier, the onus was on the government to prove that an individual isn’t a citizen of India, now Sonowal challenged the law and made it mandatory for the individuals to prove that they are citizens of India and if they fail then they give the state an opportunity to torture them and throw them out of the country forcefully.

During the Assam assembly election held in 2016, Sarbananda Sonowal, who has been instrumental in helping the RSS spread the dominance of Hindi language and the Hindutva ideology in Assam, promised to throw away the Muslim Bengalis from Assam if voted to power. Milking the communal antagonism in Assam, which is prevalent since the RSS organised one of the largest pogroms of  21st century Assan in 2012, the BJP rode to power over sheer xenophobic votes.

By tweaking laws and by forcing its diktat on the majority of the people in districts like Barpeta, Dhubri, Goalpara, Nagaon, Morigaon, Karimganj and Hailakandi, which are Muslim-majority districts, the BJP government managed to throw the majority of the poor Muslims in trouble; harassing them by demanding numerous identity and citizenship documents, which even drove a poor Muslim labourer to commit suicide after he couldn’t arrange birth certificate for his daughter to prove her as a part of the family tree.

The unfriendly and extremely bureaucratic NRC staff, the double standards adopted to segregate the Bengali Hindus and Muslims, the deliberate harassment meted out to the Muslim community, the attempts to bully the Muslims and make them feel humiliated, combined together to make the citizen record update experience in Assam the most dreadful one for the poor Muslim people.

As this exercise will disenfranchise a lot of poor Bengali-speaking Muslims in lower Assam, the finalisation of the list will also give the state-machinery and the militant fascist organisations a scope to hunt down the Muslims and, in many cases, lynch them with impunity. The Bengali-speaking Muslims will have no other scope, but to flee to states like West Bengal or Tripura, where their coming will be utilised by the Hindutva camp to flare up communal hatred at the grassroots against them. The dominance of Hindi language and the Hindutva ideology at many places of Tripura and West Bengal will help the RSS to even trigger large-scale communal riots targeting the refugee Bengali Muslims.

A long-term plan is executed by the Modi government in Assam and entire North East, where the RSS wants to unfurl the saffron flag and establish Hindutva hegemony, to polarise the people, tribal and otherwise, under the umbrella of Hindutva. The disenfranchisement of the Muslim community in Assam will help the BJP largely as it will use the same technique in states like West Bengal and Tripura, where it thrives on anti-Bengali Muslim sentiments of the majority Hindu community.

Working class and peasant movements are very weak in Assam as the fascist political trends dominate the state. To defeat the dominant Hindutva fascists, backed by the xenophobic Akhomiya fascists, the democratic revolutionary forces of Assam must unite the marginalised communities and oppressed tribal people against the common enemy, the feudal landlord classes, the comprador capitalists and the agents of Hindutva. There is a dire need of building a bridge between the Akhomiya Hindus, tribals and the Bengali-speaking Muslims and Akhomiya Muslims so that the mistrust built by the Hindutva camp can be done away with.

Akhomiya society needs to know that it’s not the Bengali influx that is bringing them economic despair, rather the hitherto existing economic policies of New Delhi with regards to Assam and its six other sister states keeps the region in utmost economic despair. While the ruling classes of India, the Mumbai, Ahmedabad and Delhi-based comprador capitalists and their foreign corporate masters, love to exploit the resources of Assam to build a heap of profit, they never build industries or start business in the region to keep it deprived of economic growth and thereby turn it into a cheap migrant labour pool for both blue-collar and white-colour jobs.

Throughout Assam and the neighbouring region, the progressive and democratic forces are required to build up an alternative struggle against the xenophobic and bigot Hindutva fascism and its local lackeys. Democratic struggle of the peasants for land, the struggle of the tea garden workers for better wages and rights, the struggle of the working class for a respectful living must be joined with the nationalist struggle of the Akhomiya people against the loot and plunder of their resources by the outsiders and the Akhomiya people must be united with the Bengali people, both Hindus and Muslims, by showing them the common interests they all hold against the utmost fascist Hindutva camp and the Indian ruling classes that the RSS and the BJP represents. Otherwise, Assam will be doomed due to the tyrannical rule of Sonowal & Co.