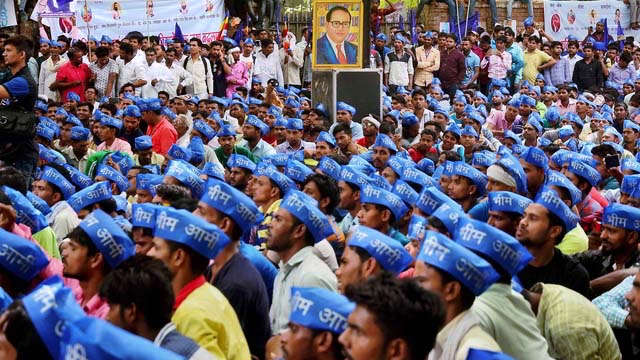 Dalit agitation in Maharashtra, following the violence unleashed upon the community by the Hindutva fascism-incensed upper-caste mob during an Ambedkarite rally to commemorate 200 years of the battle of Bhima Koregaon, where the army of Peshwa Baji Rao II had been thwarted by the Bombay Native Infantry of the colonial East India Company, is now not only grabbing national headlines but also creating a nationwide stir among the Dalits against the Hindutva fascist empire of Narendra Modi.

The rise of a strong Dalit power post the Gujarat elections, where the Dalit and Patidar voters caused severe trouble to the hegemony of the Hindutva camp, is a matter of peril for the RSS and the BJP, as it can bring up a very different equation in the rural heartland of Maharashtra, even if the BJP and the Shiv Sena become successful in polarising the majority Maratha community. Because, despite all attempts to incite the Marathas against the Dalits using the anti-reservation rhetoric, the movements that the RSS tried to build up using the Maratha community’s arch-reactionary section failed because of the rising discontent among the Maratha farmers due to the pitiful condition of agriculture in the state. Farmers’ agitation had to be quelled last year using pellet guns by the police like the Indian state maim the Kashmiri youth demanding freedom.

The large-scale incessant protest rallies of the Dalits, counter attack on Hindutva forces, a strong resistance struggle and strike in Maharashtra forced the dominant feudal landlord class and the Hindutva fascists to retreat. The Maharashtra government of the BJP, led by Devendra Fadnavis, tried to quell the Dalit outburst using state repression at the beginning, however, failing in dousing the flames, which show signs of becoming a prairie fire like the post-Una Dalit agitation, the Maharashtra government and the Modi government have jointly undertaken the task of vilifying the struggle of the Dalits by using the “nationalism” card and by levelling baseless allegations against the agitators.

It’s a fact that the Ambedkarites who organised the celebration rally on the occasion of the second centenary of the battle of Bhima Koregaon, wrongly depicting the battle between the East India Company and the Peshwa’s army as a  battle of liberation of the Dalits. They are indeed committing a historic blunder (or committing a heinous crime) by building up a fake narrative around an event that even doesn’t connect itself remotely with the aspirations of the Dalit community seeking liberation from Brahmanical feudal ostracisation, apartheid and bondage.

However, the portrayal of the Brahmanical, feudal and colonial-collaborator Peshwa Baji Rao II as a defender of India’s independence at a time when the modern Indian state wasn’t even born, is equally wrong and rather a more ghastly crime committed by the Hindutva fascist rulers, who want to drive a deep wedge between the Maratha community and the Dalit people. The RSS is trying to incite caste riots by instigating the dominant Maratha community against the marginalised Dalits in the state, where both communities came face to face, quite often, since the 2006 Khairlanji Dalit massacre.

When their plan of turning the Dalit vs Hindutva fascist struggle into a “war” between anti-nationals and “RSS’ nationalists” failed, the BJP and the Modi government trained its guns at the Dalit activists by vilifying them using the captive television channels of the Modi regime like the Republic TV, Times Now, ABP News, etc., along with host of newspapers, websites and other propaganda outlets.

The multi-million dollar news anchors kept barking at the Dalits for instigating violence at the command of their masters- the corporate houses and their bootlicker Modi government. Yelling their lungs out, these anchors-cum-trumpets of the Modi regime blamed the Dalit leaders for dividing the country, while maintaining silence on the issue of the violence unleashed by the RSS and the BJP.

Despite their unbridled vitriol against the Dalit community and their attempts of misleading the people into believing that the battle of Bhima Koregaon was a war of national salvation by Peshwa Baji Rao II, the RSS-led Hindutva camp and the Modi government, along with their toady media outlets aren’t getting any success in quashing the people’s agitation, which is spreading like a wildfire all over Maharashtra.

The arsonist and rioter BJP and Shiv Sena are running for cover due to the intense struggle of the Dalits. Entire Maharashtra is experiencing a new surge in militant identity movement against the Hindutva camp, while the RSS is watching a large-section of its Dalit vote bank, assembled by it under the saffron banner with years of communal polarisation, eroding in Maharashtra slowly. An unbearable loss for the RSS, which is now trying to prevent this loss at any cost.

Utmost frustration can be seen gripping the anxious and disarrayed Hindutva camp as the RSS and its riot-monger henchmen are filing police complaints against the Gujarat MLA, Jignesh Mevani and JNU student, Umar Khalid for inciting violence in Bhima Koregaon, while it was clear from the beginning that the violence was unleashed by the BJP and Shiv Sena men, under the command of the RSS leaders and they were instrumental in spreading the violence throughout Maharashtra. The more they are talking, the more can of worms they are opening and causing trouble to their own interests.

It’s not that the Dalit agitation, which is causing furore and also tremors in the Hindutva camp and within the Modi government, whose minister and Maharashtra’s self-styled Dalit leader-cum-Brahmanical hegemony-seeker Ramdas Athawale is openly countering the RSS’ accusation against Mevani and Khalid, the BJP and the RSS are visibly worried due to the assertive nature of the movement, which is inspiring the Dalits to rampage in the heartland of the Hindutva camp, smash the offices of the Shiv Sena, infamous for its vandalism since the days of its fascist founder Bal Thackeray and drive the Hindutva thugs away.

This determination of the Dalits to bring down the Hindutva camp, thrash its attempt to polarise the Dalits under the Hindutva umbrella and use the ostracised community as its pawn against the Muslim community during pogroms, the valiant nature of the struggle that is forcing the coward goons of Shiv Sena to flee and the RSS men to hide behind the police shields – is a matter of worry for Nagpur-based RSS headquarters and the Modi government. The popularisation of this type of Dalit movement against the Hindutva camp in other states will cause severe damage to the prospect of the BJP in the 2019 general election.

The Hindutva camp has existed and expanded on the basis of the support it has got from the Dalits and the backward caste men. For years, the RSS tried to bring large-section of the Dalits under the umbrella of Hindutva. The upper-caste elite feudal landlords, who lead the RSS and its various offspring organisations, do not go to kill the Muslims or Christians during the pogroms themselves but instigate the mob of Dalits and backward caste men to carry out genocides, pogroms and mass rapes on behalf of them.

With an erosion in the Dalit support-base threatened by the recent agitation, the RSS is now going to face stiff challenges in Maharashtra and it cannot rebuild its credibility unless it can instigate a horrendous communal carnage in Maharashtra or elsewhere. The possibility of such a riot becomes stronger every passing day and to thwart the conspiracy to incite such a fratricide, the Dalit struggle needs to be connected with the struggle of the overwhelming masses of peasants, workers and tribals against the Modi regime and its puppets in Maharashtra and elsewhere. The formidable force that will be born out of this unity will be lethal for the entire Hindutva camp and its corporate and feudal masters.