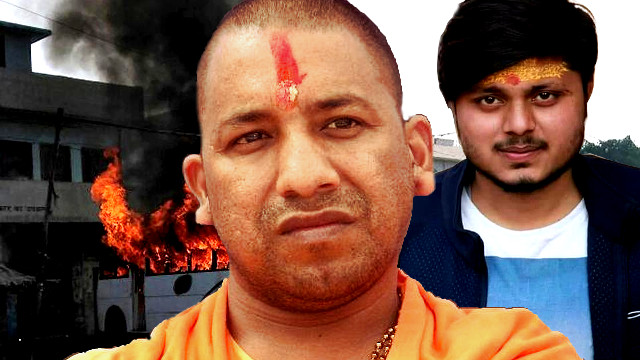 The RSS-led Hindutva thugs have instigated the Kasganj communal riot to spark a prairie fire of communal pogrom targeting the vulnerable Muslim community in riot monger Yogi Adityanath-ruled Uttar Pradesh. By inciting violence deliberately and by exploiting the tragic death of a Hindutva fascist soldier in “friendly fire”, the Hindutva camp is trying to incite communal violence throughout the volatile state and prepare the field for the final match of 2019 general election. The corporate-owned mainstream media is fanning the flames of communal tension by amplifying the propaganda of the Sangh Parivar and by vilifying the Muslim community.

Kasganj communal riot is organised using the template of the 2013 Muzaffarnagar anti-Muslim pogrom, which also took place a year before the Loksabha election of 2014. Narendra Modi and the BJP needs a large-scale communal pogrom quite desperately, which can be used to unite the upper-caste Hindus and the OBC-Dalit combo under the saffron banner of Hindutva fascism before 2019. Apart from spreading Hindutva-inspired vitriol against the Muslims, Christians, Dalits and Tribals, the Modi regime has nothing else in its kitty to use as a vote generator. Yogi Adityanath, a certified rioter and genocide inciter, came to the rescue of the Modi regime. As Uttar Pradesh has the largest number of Lok Sabha seats so it becomes imperative to raise the level of communal tension and polarisation in the state.

Let’s understand the complexities that incited the Kasganj communal tension on the Republic Day and also see why it’s wrong to blame the Muslim community for the violence that unfolded following a scuffle between the Muslim community and the Bajrang Dal–ABVP goons at the Veer Abdul Hamid Tri-crossing of the small town of Western Uttar Pradesh.

On 26 January, the local Muslims of Kasganj were observing the ceremony of Republic Day flag hoisting by the community members at the Veer Abdul Hamid Tri-crossing, named after a local Muslim from Ghazipur, Abdul Hamid, who was a soldier of the Indian Army and won the Paramveer Chakra for his valiance posthumously. It’s said that Abdul Hamid single-handedly destroyed numerous Patton Tanks of the Pakistan Army in the 1965 India-Pakistan war. So, this is a place that the local Muslims choose every year to organise the Republic Day ceremony.

The ceremony this year was going on peacefully when, suddenly, out of nowhere, came a gang of bikers carrying the saffron flag of the Hindutva camp and they started raising objectionable slogans – “Hindi-Hindu-Hindustan – Kat** bhago Pakistan” (Only Hindi-speaking Hindu people owns Hindustan and those who are circumcised must run to Pakistan) and “Yogi raj mein rehna hain to Jai Shri Ram kehna hain” (if you want to live in the reign of Yogi Adityanath then you’re bound to say -Hail Lord Rama). The local Muslim elders came out to oppose these men, who were six in number, from raising such slogans and asked them to join the Republic Day celebration if they want to but stop their objectionable sloganeering. The ruckus attracted a lot of onlookers from the neighbourhood, both Hindus and Muslims.

Rather than calming down, these Hindutva-incensed fascist thugs started abusing the Muslim elders and questioned the patriotism of the Muslim community. They called the Muslims “Pakistan agents” and told them their days are numbered unless they hoist the saffron banner. They challenged the Muslims to either hoist the saffron flag or beg for their lives in a while. When the Muslim men gathered there started questioning the patriotism of those hoodlums, they slapped an elder Muslim man. The men gathered there got irked and sensing trouble these six men fled the scene leaving behind their motorcycles. It’s then that these men went to the bigger “Tiranga” rally of the Bajrang Dal and ABVP activists and joined them in using the scuffle to start a riot.

Far away from Veer Abdul Hamid Tri-crossing, at the Bilram Gate Crossing of Kasganj, these six men and the Bajrang Dal and ABVP goons started attacking the Muslim shops and carts, burning them and looting them with impunity. There was zero police presence and the calls of the frenzied people for police assistance went unanswered. The carnage went on unresisted as the Muslims fled the scene out of fear of a bigger communal pogrom.

Within few minutes the rioters, who found the Muslim men fleeing from the area, started firing using country-made and Chinese weapons at these men. Their indiscriminate firing hurt one Muslim man called Naushad, a daily wage-earner, while their one of their own men, Chandan Gupta, was killed in the “friendly firing”. It was the death of Chandan Gupta that the BJP government and the RSS-led Hindutva fascist terrorists made a trump card to unleash further attacks on Muslims.

The rioting spread throughout Kasganj and Muslims came under attack. One Muslim man, a resident of Lakhimpur Kheri, who was going to Aligarh to meet his pregnant wife, was attacked by the RSS men in Kasganj, who tried to gauge his eyes off. Many other Muslims were wounded due to the carnage by the Bajrang Dal and the RSS.

Chandan Gupta’s father Sunil Gupta was quick to disassociate his deceased son from the Hindutva fascists and claimed that his son was killed by Muslims for no reasons. Chandan Gupta’s photograph, dressed as a Hindutva fanatic, is circulated by the RSS men over social media to build up public opinion against the Muslims; his father’s obeisance to BJP MP Rajveer Singh’s commands, including the fixing the time of his son’s cremation, which fuelled fresh round of rioting, and his naming of 20 culprits for his son’s death without being an eyewitness, shows clearly how much “apolitical” Chandan Gupta and his handlers have been.

Kasganj communal riot is actually centred around the death of Chandan Gupta; this victim of Hindutva fascist camp’s dirty politics is the prized possession of the political force he was ironically affiliated with. The dead Chandan Gupta is valuable to the BJP than the living one because showing him as a Hindutva martyr, like the two Jat brothers who were killed by the RSS and then used to incite the ghastly pogrom of Muzaffarnagar in 2013, will fetch the Hindutva camp votes and money from the traders.

It would have been better for Chandan Gupta’s family and friends to honestly chase and file a complaint against the actual culprits who shot the 23-year-old, the very men who are now controlling the verbiage and actions of the Gupta family by using their political clout. A clear example of how the RSS and the Hindutva camp can exploit the death of their men for their own advantages and bully or pressure family members into accepting their diktats. All that a father got after losing his son is ₹500,000 from a riot-monger chief minister who has fielded his “Minority Affairs Minister” to utter the Sangh Parivar’s rhetoric and blame Muslims for the killing.

Kasganj communal riot is now fuelling communal tensions throughout Western Uttar Pradesh as the bush telegraph campaigning using WhatsApp is helping the Hindutva camp to spread the vitriol faster and use doctored videos and audio clips to vilify the Muslims. The danger to the Muslims is high in the mixed community areas of the communally volatile state. Yogi Adityanath and his ministers are assuring Narendra Modi that they can replicate a large-scale Gujarat 2002 or Muzaffarnagar before 2019 and the police and bureaucracy are prepared to take selective actions against the Muslims only.

More than 49 people are arrested for the violence in the Kasganj communal pogrom and unsurprisingly, most of them are Muslims. The majority of the Muslim accused men are from the Pasmanda community (Muslim Dalits or lower castes) and the cases lodged against them have unbailable sections, which means they will have to languish in police custody and then in jail custody for a really long time. A period by which a really important part of their life will go to the oblivion, while justice will weep as an orphan in the Hindutva kingdom.

Despite all type of communal conflagrations and the inflammable condition prevailing all over the state, Uttar Pradesh is actually a state where, for a long time the Hindus and Muslims lived in peace with each other, especially in the villages. They were bonded by their economic plight and their common struggle against the tyranny of feudalism and comprador capitalism. Though the advance of the RSS and the Hindutva camp in dividing the state horizontally has brought political dividends for Narendra Modi and Yogi Adityanath, still the communal harmony that exists at large in the state throws a severe challenge to the nefarious schemes of the RSS.

Uttar Pradesh houses the largest number of Dalits, OBCs and a considerably large Muslim population, who are mostly at the bottom of the economic food-chain and are subject to severe exploitation and oppression is laden on them by the feudal landlords, who belong to the upper-caste Hindus, and the handful of comprador capitalists and corporations. This exploitation makes it important that the poor unite against the rich exploiters, which is what the RSS is scared of. Hence, the communal polarisation drive is strong in the state and the attempt is to wean the Dalits and OBCs from the grip of other parties and unite them under the banner of Hindutva by intensifying Islamophobia.

There cannot be any best place to kindle the flames of communal pogroms at present than in Uttar Pradesh and West Bengal, two of the prominent Hindutva laboratories where the BJP and the RSS are investing a lot of money to buy manpower and to set-up terrorist training camps. Kasganj is the latest milestone crossed by the RSS and the Hindutva fascists in their endeavour to keep the people divided into warring communities and sects. However, in their rush to win the whole country and enslave the Muslims, Christians, Dalits and tribals, the RSS and its shrewd leadership is forgetting to see one important aspect – the history of India and its people, which will surely be catastrophic for the fascists in the long run.

The history of India is the history of valiant struggles waged by the peasantry against feudalism and colonialism. Under the reign of Narendra Modi, in order to distract the attention of the people from the waling state of the country’s economy, its severe repercussions for the poor and the toiled masses to something else, the RSS and its progeny groups initiate communal tension and rioting using the traditional as well as new methods. On one hand they throw cow meat in temples, throw bombs disguising as Muslims, molest Hindu women masquerading as Muslims to incite communal riots, on the other hand, they use the money power of Ambani and the intellectual power of Sanjay Leela Bhansali to fuel communal tensions all over the BJP-ruled states over a film, Padmaavat and distract the people’s attention and public discourse.

However, in the long run all these attempts and hoodwink techniques will fall apart and the RSS will be forced to have its ostrich moment when the people’s struggle against inequality of wealth distribution, unemployment, jobless growth, corruption and corporate plunder of India will gain strength with the participation of the people who are thrown into the abyss of poverty in large numbers every week and day. Kasganj communal riot type conspiracies of the Hindutva camp won’t be able to save the Hindutva empire from its inevitable collapse before people’s anti-fascist and democratic revolutionary struggle.