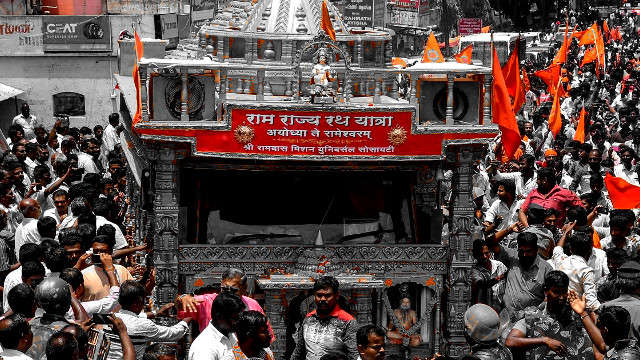 While the corporate-controlled mainstream media of India was busy talking about the election results in three states of North East India, Rahul Gandhi’s speech to Congress workers, its opposition by the BJP, and lately, the Cambridge Analytica data breach along with the “watermelon protest” by the daring women of Kerala against misogynist slurs hurled by a college professor, a sinister communal campaign that started in February from Ayodhya, the epicentre of two major communal carnages that shook the country in the last two decades, is about to reach its conclusion. The Ram Rajya Rath Yatra (Rama Kingdom Chariot Caravan) organised by the Shri Ramdas Mission Universal Society, a Maharashtra-based affiliate of the notorious Vishwa Hindu Parishad (VHP) from Ayodhya to Rameshwaram in Tamil Nadu, is one of the most dangerous communal campaigns initiated with the aim of stirring antagonism among communities and to incite pogroms against the Muslim community throughout the course it was to traverse. Out of the media’s glare, the Ram Rajya Rath Yatra has reached Tamil Nadu without facing any resistance or protest in the BJP-ruled states like Uttar Pradesh, Madhya Pradesh, Maharashtra, Congress-ruled Karnataka and the CPI(M)-ruled Kerala. The only protest it faced was when it reached Tamil Nadu and the Dravid organisations, except the pro-Hindutva ruling AIADMK and couple of other organisations that swear allegiance to Hindi-speaking rulers, staged protest against it for obvious reasons and a frightened BJP ally AIADMK rushed to impose section 144 of the CRPC to ensure a smooth passage of the caravan towards its destination, escorted by local armed RSS men and BJP cadres.

Most of the parliamentary parties, including the Congress and the self-righteous parliamentary left, led by the CPI(M), paid lip service when it came to countering the Ram Rajya Rath Yatra of the VHP vociferously and they only uttered the cliches they have been using against the Hindutva camp ever since the 1990 Rath Yatra, which was taken out by Lal Krishna Advani with the aim of seeding communal discord throughout the country and fanning riots to fracture the fragile communal unity that cemented, quite loosely, the Indian society in most states of the country since the blood-stain partition. The new Rath Yatra or the Ram Rajya Rath Yatra of 2018 isn’t merely a cultural or religious journey undertaken by Hindu pilgrims, rather it’s a well concerted and meticulously orchestrated caravan programmed by the BJP and the RSS. The saffron camp has the privilege of using its militant affiliates like the VHP, the Bajrang Dal, Shri Ram Sene, Abhinav Bharat, Durga Vahini, Hindu Samhati, Hindu Yuva Vahini, etc. with extreme audacity and run communal campaigns to polarise the people under the banner of Hindutva because these organisations, which are strongly knitted with the BJP and have their common roots in the RSS, are out of the purview of the Supreme Court and Election Commission directives of not seeking votes in the name of religion, as the BJP and the Indian state considers these organisations as fringe “religious” or “cultural organisations”, a tag that the RSS has used ever since it was banned in 1948. This shield of “cultural organisation” has provided the Hindutva camp total immunity from legal scrutiny or prosecution and made it an invincible collage of communal hate mongers and rioters.

With such reactionary political demands, including the demand of officially altering the Constitutional values and turn India into a monarchy, the VHP could manage to make the journey so far due to the patronage it received from the Modi government and the state governments of the BJP and the opposition parties. There was no visible opposition even from the parliamentary left CPI(M) and its allies against the Yatra as it entered the so-called “progressive” Kerala after touring the poll-bound, Congress-ruled, Karnataka. Neither Rahul Gandhi nor Pinarayi Vijayan uttered a word to condemn the heinous journey and none of the governments in these two states took any affirmative action against the communal vitriol spread by the Yatra and the attempts of its organisers to spew venom throughout the path it traversed in these states. Even the corporate-controlled national mainstream media remained conspicuously silent over a campaign run by one of the most infamous terror outfits in the country until the Dravid organisations started creating a ruckus all over Tamil Nadu when the Ram Rajya Rath Yatra of the VHP reached the state.

The Ram Rajya Rath Yatra is a security threat to the remnants of communal harmony in the country that the BJP and its RSS-progeny siblings are trying to fracture. It’s as much a security threat as much threat the Indian ruling classes, their state machinery and their toady media will consider a country-wide caravan of the Wahhabi-Salafi Islamists demanding the establishment of an Islamic Caliphate in the country with Sharia-based laws, Quranic teaching, official holidays on Fridays and of course, compulsory celebration of Muslim day. In case, such a caravan of the minority Muslim community would have been traversing from Uttar Pradesh to Tamil Nadu, then tonnes of newsprint, gigabytes of data and hours of airtime by feral loose cannon TV anchors would have been put at stake to hurl choicest abuses at the organisers, their agenda and their funding would have been dissected to the barest molecule to find out the Pakistan-connection. However, armed and funded by a majority of the US-based corporations and the Donald Trump administration, who all seek to plunder India by pitting one section of the people against another, the VHP can still manage to put up that sham “nationalist” cloak and then call Indian nationalism – Hindu nationalism with extreme audacity, because it’s now considered one of the most trustworthy lackeys of the US, Zionist Israel and the Indian comprador capitalists and feudal landlords.

Whenever the BJP wants to improve its otherwise doomed political fortune, it evokes communal sentiment and incites communal violence by spreading vitriol against the Muslims and the Christians. The Ram Mandir agitation, which aimed at creating permanent fissures in the communal territory of the cow-belt, has always helped the BJP to rejuvenate itself. The agitation of 1990-92, which resulted into the demolition of the Babri Masjid, was resurrected during the heydays of the Atal Bihari Vajpayee government in 2000-01 and it culminated with the successful flaring up of an unprecedented anti-Muslim pogrom in Gujarat during February-March 2002, when the state was ruled by Narendra Modi. Now that the Ram Mandir agitation is again resurrected by the VHP, just one year before the general election of 2019, it’s becoming evident that the Hindutva fascist camp led by the RSS is planning to kindle the flames of the next major communal pogrom in the non-BJP-ruled states, especially in West Bengal, Odisha, Kerala, Karnataka and Tamil Nadu to polarise the Hindu voters under the saffron banner of fascism.

As the political forces that have compromised with the Hindutva camp openly and secretly, are quiet on the issue of communal hatred spewing by the VHP through the infamous Ram Rajya Rath Yatra, the democratic and progressive people of the country, who are keen to protest and resist the Hindutva aggression and protect and establish the democratic and secular values, must come together during this crucial hour, when the wheels of the Hindutva fascist juggernaut is moving fast towards its goal, by forgetting the minor differences over opinion and even major political contradictions, to hasten the doom of the RSS and the Modi government managed by it. The Hindutva fascism will not sit idle for a single second until Narendra Modi is able to establish a Brahminical monarchy by 2022 after securing Lok Sabha and Rajya Sabha, it will continuously hatch new vile conspiracies and implement them to widen the cleavage of social fissures and thereby unite the backward caste Hindus, the Dalits and a section of the tribal people under the banner of Hindutva. Therefore, the progressive, democratic and anti-fascist organisations and individuals too can’t remain a mute spectator and they must plunge into the fray to oust the communal and ardently fascist Hindutva bigot regime of Narendra Modi. Stern opposition to the Ram Rajya Rath Yatra and exposing its communal agenda are essential parts of this bigger struggle to bring down the Modi empire, there cannot be any laxity in this and the anti-fascist forces must play their key role in this crucial struggle.