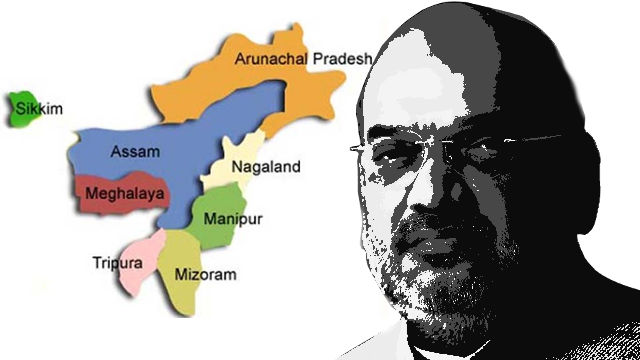 Amit Shah, except for his villainous role in the Indian polity, also masters in the art of comedy, especially when he claims something in public, which returns to haunt him later as an irony. During a recent speech at the 3rd North East Democratic Alliance (NEDA) conclave in Guwahati, Amit Shah said that the BJP has ended the “briefcase politics”, i.e. the politics of corruption where one party buys the legislators of another party through bribing. Amit Shah blamed the Congress for corruption in politics, while, at the same time, making himself a laughing stock for millions of people throughout the country, who have seen the same Amit Shah never lose a chance to form a BJP government, even instances where the BJP has no substantial strength in an assembly, by judiciously using a small part of the money his party receives from foreign and Indian corporate houses to buy support from smaller parties and opposition legislators.

The “fight against corruption” is a cliche that the BJP and Narendra Modi have used to deceive the people of the country in believing that the Hindutva fascist force will weed out corruption and usher the country to a new dawn of prosperity. However, since their coming to power, all that Narendra Modi and the government has done only helped the big corporations, foreign banks and feudal landlords, the powerhouse of corruption in India. The policies of the Modi government didn’t stop corruption in politics, rather by widening the scope of corporate investment in political parties, without mentioning them in records, the BJP has allowed corporate houses to virtually own stakes in political parties.

In the last four years, the BJP has become the richest party on earth and its income has substantially risen. The party has spent billions in its election campaigns throughout the country since 2014 and it swept most of the major elections using money and muscle power. The states where the BJP couldn’t win the required number of seats to become the majority party, like in Bihar, Goa and Manipur, it used its money power and a little bit of muscle flexing to form the government with unlikely coalition partners.

The biggest irony was that Amit Shah chose the NEDA conclave to voice such a claim, knowing that the existence of the NEDA itself is the testimony of a thriving rule of corruption in politics of North East. The NEDA is flocked by the heavyweights of North Eastern politics who are veterans of political horse trading. Chief ministers like Pawan Chamling (Sikkim), Nongthombam Biren Singh (Manipur), Pema Khandu (Arunachal Pradesh), Neiphiu Rio (Nagaland) or Conrad Sangma (Manipur), flocked to the camp of the RSS only when they were lured with a higher sum than what the Congress could put on the table. The Man Friday of Amit Shah in North East India, Himanta Biswa Sarma, himself is an imported piece from the Congress Party.

By mastering this art of political volte-face in Bihar, Manipur and Goa, Amit Shah is now giving sermons on transparency and honesty at a conclave of the utmost corrupt politicians. The “briefcase culture” of the Congress Party didn’t just end but died a brutal death as the BJP has mastered a better art of poaching the unscrupulous parliamentary politicians of North East India. The money is so huge that briefcases can’t serve the purpose and probably Amit Shah has ensured that the online payment systems offer the BJP special services to buy the legislators as and when required.

Mizoram has the only non-BJP government in the entire North East and now the BJP is aiming to grab that state as well. Tripura Chief Minister and faux passe expert Biplab Deb and Himanta Biswa Sarma are playing a crucial role under the supervision of Amit Shah and Ram Madhav to build up a political equation that will limit the chances for the Congress in the poll and help the BJP and its partner(s) to sweep the poll. Amit Shah reminded his sycophants present in the conclave that the BJP wants them all to plunge into the election fray of Mizoram and seize victory in the state.

Though the BJP is facing the strongest resistance in Assam, where its politics of pitting the Bengali and Assamese Hindus against the Bengali and Assamese-speaking Muslims backfired due to the constant agitation by the KMSS led by Akhil Gogoi, the party is trying to do a damage control over its betrayal of the Assam Accord by mobilising the RSS stormtroopers to the Muslim-majority areas of Southern Assam, near the border with Bangladesh, with an attempt to incite a communal carnage, which can be used as an excuse to execute an anti-Muslim genocide plan in the region. Both Amit Shah and Himanta Biswa Sarmah are certain that a large-scale communal violence will help the BJP to storm the anti-incumbency wave in Assam and also use the context of Assam to fetch votes in Bihar, Uttar Pradesh and West Bengal.

It will be quite ridiculous and naive if someone requests Amit Shah, who rose to power by using violence and bloodshed as his indispensable tools, to pay heed to the deteriorating economic condition of the country, the rising fuel price and the subsequent inflation. However, for the Modi government, economics is an alien term and all they could do is push some mediocre economists, sans any vision or idea, to meet and decide upon India’s macroeconomic and monetary decisions. Amit Shah isn’t concerned about economics, he’s concerned about winning elections until 2022, when the Constitution will be amended and the Hindutva fascist kingdom will formally come into existence, as per the RSS calculations.

Amit Shah should be told that the people of North East, who otherwise have experienced the unbridled loot and plunder of their resources, aggression on their culture and language, attack on their near and dear ones and bloodbath on the streets, are now watching the government of Modi and its misdeeds very closely. By deploying military and by not lifting the AFSPA from everywhere, the Modi government cannot stop the imminent rising of the people against the corrupt and filthy governments of the BJP. Narendra Modi and Amit Shah must know that the people will, through their extensive struggles and movements, smash the happy days of the fascist camp in the North East. It will be a rich optic to see whom the deposed-off opportunist politicians of North East will align with after the BJP will face the wrath of the people.