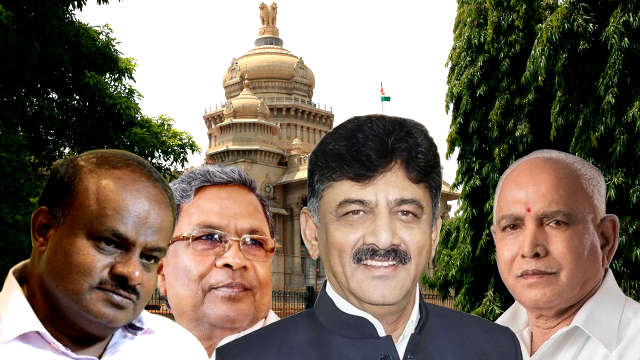 Both Karnataka assembly election 2018 and the high-voltage political drama that followed the results, give us a clear warning that the BJP under Narendra Modi, Amit Shah and their battalion of riot-mongers and Muslim bashers will not lose any election in the coming days and they will manage to secure majority in the 2019 general election, which will make it easy for them to change the Constitution of India to turn India into a Hindutva fascist-theocratic state by 2022.

Though a section of the mainstream media, the overzealous Congress supporters and liberal democrats may merry over the resignation by B.S. Yeddyurappa, the BJP’s tragic chief minister for a day, after his party couldn’t secure the required numbers during the floor test in the Vidhana Soudha on 19 May 2018, the fascist Hindutva camp isn’t politically defeated in Karnataka, as the BJP managed to secure the highest number of seats as a single party in the assembly election, despite Amit Shah and Modi anointing the utmost corrupt Yeddyurappa as the chief minister candidate and nominating the infamous mining mafia – Reddy brothers of Bellary.

Despite the allegations of killing M.M. Kalburgi, the brutal murder of Gauri Lankesh and the numerous cases of inciting riots and sponsoring mob violence in coastal regions of Karnataka, the BJP still managed to increase its tally from 40 to 104. This doesn’t calls for a jubilation, rather a retrospection over what went wrong that the people flocked under the saffron banner knowing its toxic character.

If the newly stitched Congress and the JD(S) alliance could manage to secure a magic tally of 118 by taking away all legislators away from Karnataka, mostly on bus to avoid flight diversion during landing, then it’s not a sign of a victory against the communal fascist forces, rather it’s a sign that how fragile the parliamentary opposition to the BJP is; it’s a sign how corrupt and untrustworthy the people’s representatives are (who claim to uphold secularism and voice for democracy) as they can sell their political allegiance for any sum of money in the multiples of ₹100 crore.

This corrupt character of parliamentary politicians, their zero liability towards any ideology and absolute loyalty towards money, which Amit Shah has plenty – thanks to the generosity of the likes of Adani, Ambani & Co., makes it absolutely impossible to rely upon these unprincipled, opportunist, utmost corrupt parliamentary politicians in the battle against Hindutva fascism.

Recently, the Congress released a tape of a conversation between one of the infamous mining mafia kingpin Reddy brothers and a newly-elected Congress MLA, where the mafia don asks the Congress MLA for support and promise him 100 times more wealth in the five years than what he has earned so far. Nearly 99 per cent of the Karnataka Congress MLAs have assets over ₹1 crore legally and to multiply it by 100 means ₹100 crore in five years, i.e. ₹20 crore every year. Now with that much possibility for a simple MLA to increase his wealth, one need not have to calculate to understand the benefits that the BJP will provide to those who get a ministerial berth in the state or at the central level.

If the jubilation of the liberal democrats have subsided after D.K. Shivakumar-led Congress temporarily stalled the efforts by Amit Shah to wrest control of Karnataka by paying ₹100 crore to each of the legislators of the Congress and the JD(S), who would vote for them during the floor test, then they must look into the ground realities of politics in the country, which didn’t change much in Karnataka.

They have to see that the MLAs, who were taken away from Karnataka, lest they fall prey to poaching, can switch allegiance later as well, at a time when the Congress and the JD(S) combo will feel secure and relax their vigil. Karnataka is an issue of prestige for Modi and Amit Shah and they will ensure that post 2019 general election, when the BJP is all set to win a huge margin, thanks to the politics of polarisation, fake news, vitriol and communal carnages, the BJP wrests control of Karnataka to fulfil its mission of an opposition-less India.

Karnataka is a deeply polarised society, where the Hindu-Muslim antagonism is played well by the BJP and other RSS affiliates. Throughout the coastal Karnataka, the Hindutva forces like Sri Ram Sene, the Bajrang Dal, the ABVP, Vishwa Hindu Parishad and other terrorist organisations have created a vicious environment that polarised the Hindus and Muslims on communal lines. By fabricating stories, by spreading vitriol and by falsifying the history of the Mysore ruler Tipu Sultan’s rule, the Hindutva camp has toxified the minds of the common Hindus, including the Lingayats and even the Dalits.

The Congress, which ruled the state with a majority since 2013 couldn’t stop the growth of the Hindutva terrorists and it even failed to stop the atrocities on the minority community. Even the government failed to save the writers like M.M. Kalburgi and Gauri Lankesh from the bullets fired by the hired mercenaries of the Hindutva camp. The Siddaramaiah government failed to provide any security to the African nationals, who came under attack from local residents over their skin colour. These failures were not genuine failures, rather they were very much deliberate. This deliberate reluctance showed by Siddaramaiah government helped the BJP to increase its seat count by spreading hatred and by intensifying communal polarisation.

When the Election Commission and other executive bodies, the entire judiciary and the military establishment have openly inclined towards the Modi government and are working to preserve it, the thought that merely through elections the Modi government can be toppled is a fancy dream, which can’t be realised. With more than 20 states under its control, the BJP and the RSS have consolidated their power and they have gained unprecedented strength. Nothing can change the equation and their goal of establishing a Hindutva kingdom through elections. Karnataka assembly election showed how they manage to secure the highest number of seats by simply using the Hindutva ranting. So, the temporary halt in their journey cannot write the BJP off.

The lesson of the Karnataka assembly election is that the BJP will continue playing the dirty game of “political manoeuvres” by poaching opposition legislators and thereby stitch any kind of alliance that will allow it to rule any state. For the BJP, Karnataka is an important state and to win victory in this state, the party and its leaders won’t leave any stone unturned in the coming days.

Siddaramaiah may have delivered a masterstroke by offering the Chief Minister’s position to Kumaraswamy, to ensure he doesn’t dare another public face-off with his father, the ailing former Prime Minister H.D. Devegowda, by aligning once more with the BJP, however, only time will tell whether such a  masterstroke and the subsequent political drama can save the Congress-led coalition from the BJP’s aggressive drive, especially when two constituencies will go for polls soon and where the BJP is all set to sweep clean victory. It’s most likely that when the results of the pending two seats are out, the BJP will make its manoeuvre by ensuring that only few MLAs cross vote in favour of B.S. Yeddyurappa.

Only time will tell what will happen to Karnataka’s volatile political future. The mood of the Kannadiga voters clearly show that the BJP is still the first preference throughout Karnataka, and if this favourable support is again transformed into votes during the 2019 general election, even with an utmost corrupt B.S. Yeddyurappa at the helm, the BJP will secure a huge lead. Narendra Modi, Amit Shah and Yogi Adityanath will intensify their communal polarisation drive to ensure not a single corner of Dravidian land remains immune to Brahmanical communal polarisation.

To defeat the BJP in Karnataka and other states of India, it’s important to not follow the path shown by the Karnataka assembly election and the high voltage drama of horse trading; rather, it’s imperative to start a massive revolutionary movement of the working class, the farmers, the toiling people, the progressive and democratic intellectuals, women, students and youth against the Modi government and its disastrous policies. A massive movement which will need a common understanding of all genuine anti-fascist and pro-democratic forces, who will uphold the banner of secularism and anti-imperialism in their struggle, can arouse the masses against the vicious politics of the BJP and the RSS, and through an arduous struggle, bring down the BJP-led governments in Delhi and all states.

Until the democratic and progressive leaders of the left and anti-fascist forces understand the gravity of the situation and keep away their ideological differences for a moment to find out a way to unite with each other and consolidate the strength of the working class, the farmers and other sections of the society against the fascist government, the BJP will run its juggernaut without any real hindrance and will turn India into a bloodied land, where communal violence will be the order of the day. Karnataka assembly election result shows that the BJP is doing well in its endeavour, but the revolutionary and anti-fascist representatives of the working people are not even faring satisfactorily. It’s time to hasten the work, it’s time to smell fascism.