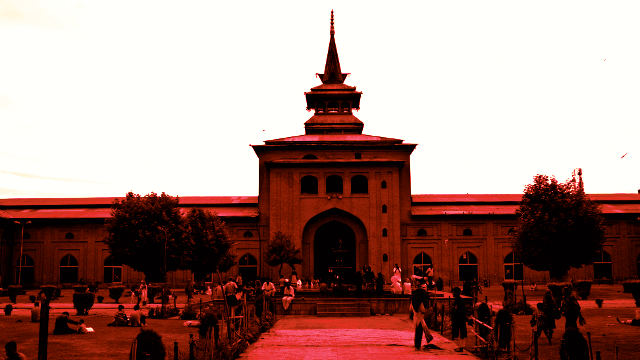 While the Indian state was brutally massacring people in Thoothukudi of Tamil Nadu to serve the interests of the Vedanta group, how could the people of Kashmir remain safe, when they are supposed to be the first to take bullets and pellets of the “patriotic” Indian state machinery? The attack by the Jammu and Kashmir Police and the CRPF men on the Jamia Masjid of Nowhatta area of Srinagar during the holy month of Ramzan and the indiscriminate firing of pellets and shelling of canisters full of harmful gases inside the mosque compound soon after the Friday prayers were over, exemplifies how hollow is the claim of “ceasefire” that the Modi regime and its lapdog media is drumming since last few weeks. The pellets injured more than 20 people, mostly youth, who were protesting against the Indian occupation and demanded their just right of independence.

In this year, the Indian state terrorism has killed more than 20 people in Kashmir valley itself, while according to official figures, the state terrorism killed 29 in Kashmir last year. The killing spree of the paramilitary and military forces is now even adopted by the local police, which is now attacking the local populace with similar audacity like the external forces deployed by the Hindutva fascist state to eliminate local people’s resistance against the brutal occupation of their homeland.

When the government has announced a “ceasefire” and marketed it with vigour to show itself as a “peace initiator”, it actually aimed at using the pretext of Ramzan and its purported ceasefire to intensify trouble in the valley by severely humiliating and inciting the people. The Modi government knew that the people, who have been strongly resisting the Indian occupation ever since Burhan Wani, a militant commander, was gunned down during the Eid celebration of 2016, won’t sit quietly when they face national humiliation at the hands of the Indian occupation forces. The anticipation of their protests across the valley was the excuse that the Indian rulers have been looking for to unleash a new wave of state terror on them.

The summers of Kashmir in the last two years have been remarkable for the enthusiasm shown by the local people in braving the bullets and pellets of the Indian occupation regime and vocally protest against their national humiliation. This Ramzan couldn’t have been different when the government was baying for the blood of Kashmiris and the corporate mainstream media was demanding from the military establishment to spill blood on the streets. Jamia Masjid attack, the indiscriminate pellet and tear gas firing inside the mosque campus, even inside the mosque’s prayer hall, served the purpose of sadist motivation that the Indian forces and their lackey, the J&K Police looks for to keep themselves high.

The Rahul Shivshankars or Arnab Goswamis of the toady league of Narendra Modi wouldn’t be happy with less blood on the streets, as their “patriotic” show could only go on when the streets are entirely crimsoned and the tally of victims increase significantly, which can then be shown as the major achievement of a “nationalist” military paid by the taxes collected from the common people. The attack on a mosque incites their fetish of killing Muslims and destroying their places of worship, since the days of Babri Masjid demolition. Also, it will give them the orgasmic pleasure of comparing their military capabilities with their pay-master Zionist Israeli mercenaries, who do the same thing to Arab Muslims and Christians in occupied Palestine.

Tamil Nadu killings immediately captured the national headlines and Jamia Masjid shooting, which is also as barbaric an act, got no media attention, except for some lip service on “Indian patriotism” on Kashmiri soil, the cliches used by the regime and its toadies to keep the show on. The reason that the Indian mainstream media, its celeb anchors and high-paid columnists decided to omit it, except for the standard coverage by The Hindu, was because the violence against Kashmiri people has become so mainstream, mundane and so integral part of Indian middle class’ quotidian existence that it needs no special mention any more.

The colonisation of Kashmir and the brutal massacres by the Indian occupation regime will not consolidate the Indian ruling class’ victory on the people of the valley for a long time. Once the people of Kashmir are equipped with a democratic, progressive and visionary political ideology that will drive them towards the cause of their salvation by uniting and organising them against the Indian ruling classes and their local puppets, then there will be little room left for the Hindutva fascist Indian state to do its manoeuvres. By firing indiscriminate pellets or bullets, like the Jamia Masjid attack, the Indian occupation regime will be unable to contain the massive people’s wave then and that crimson wave will finish off the brutal occupation of Kashmir for sure.

Until then, Indian media consumers, let’s overlook atrocities on people of Kashmir because for you they are sub-human. For you Jamia Masjid doesn’t exists, just like Konan Poshpora or other localities that carries the brunt of your oppressive rule.