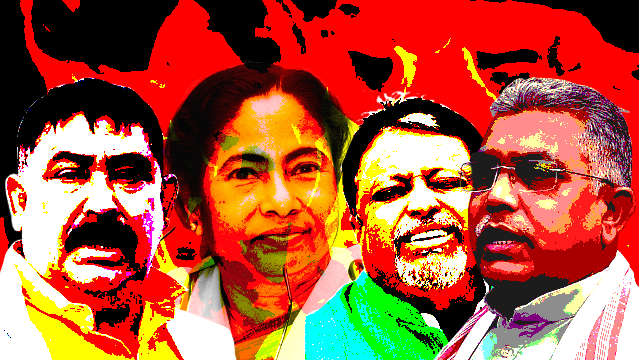 The fields of West Bengal’s countryside were crimsoned by the blood, spilling from the corpse of those who were lynched by the ruling Trinamool Congress or its opponents, the BJP and the CPI(M), in their quest for seizing as many seats possible in the three-tier Panchayat election of 2018. The 2018 West Bengal Panchayat election is so far the bloodiest of all Panchayat elections held in the state and the ruling TMC’s efforts to bring forth the BJP as the principal opposition party in the state where it had no organisational presence before 2014, became quite visible in the party’s advocacy for violence and pushing the Bengali poor and middle-class towards the BJP at a time when the other opposition parties, including the former ruling party, CPI(M), are virtually non-existent.

Nearly 18 people have lost their lives, among whom a CPI(M) supporter couple was charred to death by the TMC goons. TMC leader and mafia ganglord Arabul Islam, who was arrested a few days ago for killing a political activist in Bhangar, was found running the election violence campaign from the police custody in connivance with the police bigwigs. Panchayat election in Bhangar is a prestige issue for Arabul Islam, whose criminal lordship on the region came under strong challenge from the villagers who are protesting against his forcible land acquisition and criminal domination.

West Bengal experienced a spurt in violence throughout the state’s countryside, where the Panchayat election was scheduled, since the beginning of April. As the date of filing nominations came close, the violence unleashed on the opposition by the ruling party’s thugs intensified manifold. The opposition parties like the CPI(M), Congress and the BJP were not allowed to file nominations and the mafia ganglords of the TMC like Anubrata Mandal of Birbhum, Arabul Islam of Bhangar, etc., ensured that the TMC goons open fire or baton charge the opposition members whenever they file the nominations. Their violence paid a heavy dividend and the TMC secured uncontested victory in 34 per cent of the Panchayat seats. The election was held for the rest 66 per cent. Mamata Banerjee’s TMC managed to secure the highest number of seats, while the BJP registered itself to be the runner-up in the turf of West Bengal where the party has gained considerable ground, thanks to the sheer lawlessness in the state and the Hindutva camp’s excellent blending of communal vitriol with the apathy and utmost corruption shown by the TMC.

Violence unfurled in West Bengal since Saturday, 12 May night and it intensified on Sunday, 13 May night. In Kakdwip of South 24 Pargana district, a CPI(M) supporter couple was charred to death by the TMC, an accusation that the party vehemently declines and continues to blame an accident for the tragic killing of the couple. The violence skyrocketed throughout the territory of West Bengal, especially in regions that the TMC calls its fiefdom, and the polling and presiding officers, apart from the opposition party members, fell prey to the violence unleashed by the goons of the TMC.

The state government sat quietly, wringing its hand in lacklustre, while the blood of the opposition members was spilt on the soil of the state. Not even the senior citizens could recall any one instance of Panchayat election with a similar amount of violence and bloodshed since the three-tier system came into existence in the late 1970s. Almost all major villages in the important blocks of the state, experienced the explosion of country-made bombs and firing of .303 bullets from pipe guns wielded by the men of the ruling party, led by their gangster leaders. Almost each and every TMC MLAs from the rural parts of Bengal oversaw the violent campaigns and managed them through their network of strongmen. The West Bengal Police unapologetically gelled with the miscreants and henchmen of the TMC and provided them immunity cover, whenever they launched any ferocious attack on the villages.

Throughout the fields and roads of the rural West Bengal, the goons of different political parties, who officially abhor “violence” in politics and swears allegiance to “democratic values”, from the ruling TMC to the opposition BJP and CPI(M), used all sort of weapons and unbridled violence to capture polling booths, intimidate opposition voters and garner as many votes as possible. Even little toddlers were not spared by the “foot soldiers of democracy” and the “worshippers of Unnoyon (development)” throughout the state. Countrymade bombs, countrymade one-shotters and pipe guns were used randomly and with utmost impunity by the members of the ruling party, to which the police paid blind man’s attention.

Due to this spurt in violence, the fate of the West Bengal Panchayat election 2018 is sealed in favour of the TMC, which will continue to plunder the funds meant for the welfare of the poor for the next five years.

This egregious bloodshed during the Panchayat election is an intrinsic part of the culture of political violence in West Bengal that the TMC under Mamata Banerjee inherited from the erstwhile Left Front regime led by the CPI(M), which ruled the state with an iron fist for 34 years using the same weapon. The CPI(M) and the Left Front inherited the culture of violence from the Congress Party that ruled the state with impunity between 1947 to 1967 and 1972 to 1977. The baton of the heritage is now passed to the BJP, a communal fascist party that the TMC once partnered and helped to entrench deep inside the rural hinterland of West Bengal. The BJP resorted to violence as well, by exploiting the mass anger against TMC’s atrocities. The RSS-led goons also carried out political murders and arson in different villages of West Bengal during the Panchayat election. The BJP is also using the pretext of the violence unleashed by Mamata Banerjee’s henchmen to call for the dismissal of the West Bengal government by the Central government under the section 356 of the Constitution.

The TMC leader and a minister of Mamata Banerjee’s cabinet — Partha Chattopadhyay vehemently denied any occurrence of violence during the Panchayat election and reported that there were stray incidents of violence, which, according to him, were initiated by the opposition, whom he and his party blamed of being frustrated after they found “Unnoyon (development)” surrounding them wherever they are going. The infamous dialogue of Anubrata Mandal, “when the opposition will go out on the roads they will find Unnoyon (development) standing there”, has become a viral content for political memes and criticism. Still, despite facing severe criticism and mocking over her absolute reliance on violence and bloodshed to win power in what’s called democratic processes, Mamata Banerjee is unabashedly standing behind the mercenaries and vehemently opposing anyone who is questioning her right to remain in office when her party has to secure a majority by killing, maiming and jailing people. Mamata Banerjee kept his anti-BJP babbling on, however, under the cover, the TMC men provided political space for the riot-monger, Hindutva fascist party, to reach out to the people aggrieved with Mamata’s violent and corrupt methods, to bring them under the banner of saffron bigotry and terrorism. Mamata Banerjee’s anti-people, anti-Bengali and anti-poor policies now lay bare and her party is now identical with a large gang of political robbers trying to plunder the state.

Mere apologetic behaviour or displaying hysteria of annoyance over the growing incidents of violence will not reduce violence in the countryside of West Bengal, where political power does grow from the barrel of guns. In such circumstances, when the opportunity for democratic discourse has shrunk and where the rulers are synonymous with plunderers, the people’s resistance struggle for socialism and justice becomes the only way out of the trouble. It’s needed to see how many can be inspired to take a step to join the major struggle against pulling down the Modi government and its accomplice, the Mamata Banerjee-led West Bengal government.