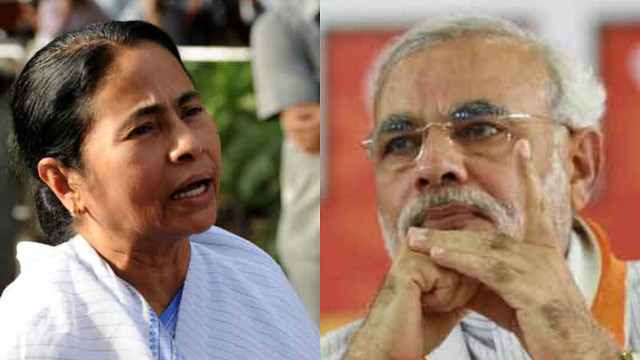 West Bengal is a crucial state for the BJP to wrest in 2021 and as a run-up to the crucial assembly election, the BJP is using the 2019 general election as an acid test. The goal of Amit Shah and the entire RSS-led Hindutva mafia is to wrest 22 out of 42 Lok Sabha seats of the state and become the principal opposition party by overtaking the Congress and the ailing parliamentary left. It’s a goal that the BJP wants to achieve so badly that it has triggered numerous riots, of different intensity, throughout the state since 2015, which is an unprecedented thing in West Bengal.

When Narendra Modi went to Midnapore of West Bengal, a town that’s laced with the history of revolutionary anti-colonial struggle and the peasants struggle against feudal-corporate nexus, he didn’t forget to kindle the flames of communal hatred before the 2019 general election. Despite the tent collapsing and people getting injured (he called an overbridge collapse in Kolkata a “divine curse”), the narcissist prime minister kept his rhetoric mongering on and fired a salvo at the ruling Trinamool Congress, which is actually a secret partner of the BJP.

By calling the major festival of the Bengali Hindus – Durga Puja – under threat, the prime minister tried to legitimise and give an official endorsement to the RSS’ much peddled lie about West Bengal that the Hindus in the state are living under a threat of Islamist siege. Narendra Modi, a Gujarati with no connection with West Bengal or the Bengali culture, has set his lackeys, who can’t pronounce a word in Bangla, to manage and rule the state and using the vitriol against the indigenous Bengali Muslims, the BJP and the RSS are trying to bring the Bengali Hindus, especially the Namasudras (Bengali Dalits), backward castes and upper-caste elites and middle-class under the banner of Hindutva fascism and its standard of bigotry. Narendra Modi simply drummed the RSS’ campaign to stir up Islamophobia among the people, which will be then utilised by the saffron camp to trigger communal pogroms.

In West Bengal, the BJP has used the Mamata Banerjee-led Trinamool Congress to create an environment of lawlessness, terror and utmost corruption that has fuelled the desire for a change among the people of the state. The BJP tapped the prevailing political situation in West Bengal, where the space for a genuine opposition against Mamata Banerjee’s tyranny remained vacant since a long time as the Congress got entangled in severe internal crisis and organisational erosion due to Trinamool Congress’ constant poaching, while the parliamentary left, an ailing microscopic entity, has no moral foundation to stand on after repressing the people for 34 years.

While the BJP knows that it has no better deal to offer to the people of West Bengal in terms of socio-economic development, it has the magic formula of inciting riots in the state by pressing in the hired goons of the RSS from other states, by spreading vitriol through social-media and by connecting different Hindutva terror organisations together so that their synchronised action can shatter the last vestige of communal harmony and fraternity surviving all storms in the state.

During the last seven years of its unchallenged rule, the Trinamool Congress has patronised and nurtured the communal fascist RSS and its progeny in the state as per an old accord between the party and its erstwhile official partner, the BJP. The Trinamool Congress, under Mamata Banerjee, allowed Muslim fundamentalists to gain prominence and appeased the Muslim clerics to consolidate the hold of the party on the Muslim community. The naked appeasement and adoration of Muslim fundamentalists by the Trinamool Congress and Mamata Banerjee is constantly used by the Hindutva fascist camp to build up a base, especially among the Namasudra (Bengali Dalits) community. In the last four years, BJP has constantly grown in the state, reaching the politically-backwards Bengali Hindus by moving beyond its traditional periphery of remaining confined within the non-Bengali upper-caste Marwari, North Indian and Gujarati communities living in the state.

India’s loquacious Prime Minister Narendra Modi could fan the communal virulence prevailing as an undercurrent in West Bengal by peddling the same malicious propaganda of “Hindus under siege” in the state to add verisimilitude to the xenophobia spread by the RSS to polarise voters. His endorsement will be henceforth used by the raucous Hindutva-incensed mob to stir up communal pogroms in the state like the Hazinagar, Baduria, Kharagpur, Asansol and Raniganj.

This communal rhetoric by someone like the prime minister of the country wasn’t condemned or countered by the ruling Trinamool Congress or its supremo, Chief Minister Mamata Banerjee. The party’s secondary command countered Modi’s allegation by refuting them but not attempting to expose the conspiracy hidden behind the words of the prime minister. The secret arrangement between the Trinamool and the BJP became evident earlier on many occasions of communal pogroms and riots when the local leaders of the Trinamool Congress acted as rioters and helped organisations like the Vishwa Hindu Parishad to carry out arson and violence.

The BJP and its principal funders in West Bengal, the big comprador capitalists of North and West Indian origin, have their eyes set on the prime land in Central Kolkata and other major towns of the state where the Muslim community has been living since centuries. A genocide of Muslims will evacuate these places and thereby help the Marwari and Gujarati traders to seize the properties by greasing few palms and then flourish by selling them off at a higher price to big real estate giants.

The land of the closed factories and jute mills of Hooghly and Howrah district, where a large number of Muslim migrant workers came to work, are also on the radar of the Marwari-Gujarati comprador capitalist nexus and to acquire them the Hindu and Muslim population in these localities must be forced into a communal carnage. With the active patronage of the state government led by Mamata Banerjee, the RSS-led Hindutva fascist camp has gained immense strength in these mixed community localities by utilising the reign of poverty to hire local youth as its hoodlums. These are the bastions where Narendra Modi wants to flare up communal tension before the 2019 general election to polarise the state’s majority Hindu population.

West Bengal had a history of communal harmony and unity among the working class and the peasantry against their common enemies like the big corporations, comprador capitalists and feudal landlords. Hindu and Muslim workers and peasants have fought shoulder-to-shoulder against their common class enemies and turned the state into a bastion of working class and peasants’ struggle during 1960s and 1970s, the impact of which had immuned the state from the venom of communal hatred and violence throughout the 1980s and 1990s, even when the Hindutva camp started spreading vitriol in the state with vigour.

It was only with the gradual aggression of the neo-liberal economic order, the fissures started appearing in the worker-peasant unity. Add to this the utmost opportunism of the parliamentary left bloc led by the CPI(M), which ruled the state for 34 years. The ideology of the left was maligned and turned into an object of despise for the common workers and peasants due to the heinous crimes committed by the CPI(M) and other Left Front constituent leaders. Their blatant corruption and their naked appeasement of big corporate and comprador capital helped the right-wing Hindutva fascists to spread their influence among the poor masses.

Today, as the BJP is trying to get into the principal opposition space of West Bengal politics riding on the juggernaut of communal enmity, hatred and vitriol, it’s a sign of peril for the people of the state as they will not only face severe communal violence in the state due to the nefarious activities of the RSS, but the common people, the Bengali people, the various tribal people, the Gorkhas and other minority nationalities will face a strong identity crisis as the BJP will impose the supremacy of Hindi language, Hindutva fascism and North Indian feudal order on the state.

For the BJP, the existence of a distinct Bengali Hindu character, its peculiar and unique practices and the dominance of the Bengali language is a challenge, which it will address by promoting the North and West Indian version of vegetarian Hindu religion mixed with the venom of Hindutva in the state. By changing education curriculum, schooling system and by promoting Hindi language and North and West Indian upper-caste practices, the RSS and the BJP will try to enslave the Bengali and tribal people of the state by force and pit them against the Bengali Muslims, whom the saffron camp considers as a prominent enemy.

Narendra Modi’s development rhetoric and his communal slur against the Muslim community in a sub-layered manner is a sign that the BJP will fight all elections and all political battles in the state by vilianising the Muslims and by forging a strong alliance with the Trinamool Congress behind the veil against the genuine democratic and anti-fascist left forces. The BJP has a dream to end the remnants of militant working class and peasant struggle in West Bengal and turn the state into a haven for corporate loot and plunder, especially in all tribal-majority and Muslim-majority areas.

Narendra Modi and the BJP never meant anything close to “development” as an Indian, upper-caste elite or upper-middle class city dweller would try to make us believe. Narendra Modi and his coterie mean nothing close to patriotism, unlike what the toady media channels and their lapdog trumpet players would want us to believe. For their electoral victory, the RSS-led Hindutva camp always relied on the anti-Muslim hatred embedded within the 15 per cent upper-caste Hindu elites and upper-middle class, who happen to be the decision maker in India and for whom the consumer goods industry, service sector and the big financial institutions function. The communal vitriol is not a means to secure electoral victory, rather it’s a method through which the bigotry of the upper-caste, elite and upper-middle-class gentry can be preserved and channelised to a long-term political goal – the establishment of a Hindutva fascist theocratic dictatorial state.

It’s indeed a very big responsibility of all those powers that are genuinely fighting against the Indian version of communal fascism represented by the Hindutva brand and against class-caste oppression, patriarchy and feudal-corporate aggression, to unite together under a common banner of people’s liberation and fight to achieve the very imperative goal of defeating the Hindutva fascist cavalcade led by Narendra Modi and Amit Shah. Unless the BJP and the RSS are defeated in the people’s broad struggle against Hindutva fascism, the attempts taken at fighting the BJP only through elections and opportunist poll alliance with the equally fascist and corrupt entities like the Congress, Samajwadi Party, Trinamool Congress or Telugu Desam Party will not fetch any substantial gain for the broad masses of poor workers, farmers and toiled people, especially those from the marginal and vulnerable Dalit, tribal, Muslim or Christian community.