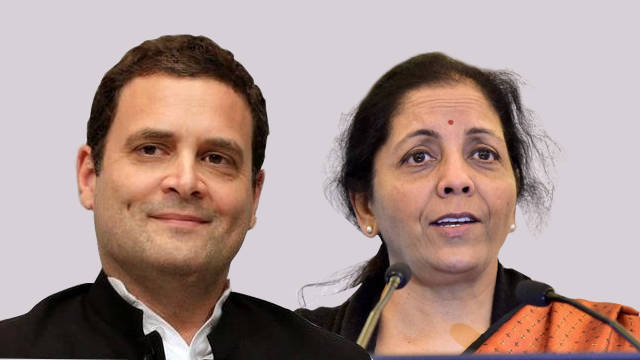 When a crisis-ridden government goes topsy-turvy over issues and ministers start swapping their roles behind the backdrop, it’s time to comprehend that by hook and crook the tyrant and sclerotic regime will try to cling to power. As soon as Nirmala Sitharaman, the defence minister of Narendra Modi’s cabinet, decided to wear the apron of a party spokesperson and do her little agitprop session by alleging that Rahul Gandhi, the Congress President, has apologised to Muslim intellectuals and called his party a “Muslim party”, then it was instantly understood that the Modi regime is seriously trapped in a severe crisis and only communal polarisation can come to its rescue when the BJP goes for electoral battle in three states ruled by the party – Chhattisgarh, Madhya Pradesh and Rajasthan later this year and Narendra Modi seeks his re-election in 2019.

Nirmala Sitharaman waved an Urdu newspaper that carried a report of Rahul Gandhi meeting some Muslim intellectuals and allegedly telling them that the Congress will do a course correction to win more Muslim support and he’s even quoted saying that his party is a “Muslim party”. The report was rejected by historian S. Irfan Habib, who was there in the meeting. He tweeted that no such incident took place during the meeting with Rahul Gandhi and the propaganda is done with malicious intent. Alt News has done a fact check and refuted the allegations levelled by the BJP. However, despite this claim, the BJP and the RSS utilised the occasion to intensify its venom spitting against the Congress Party, with Nirmala Sitharaman declaring that the Congress will be responsible for any communal violence between her press conference and the 2019 general election. She claimed that the Congress is playing a notorious role and has an intention to divide the country.

Now, though her allegations have no base and the Congress Party is vehemently defending its tallest leader by claiming it’s a party of “132 crore Indians” and not of any particular community, we still need to go deeper into Nirmala Sitharaman’s allegations and her anticipation that the Congress may trigger a communal riot in the country. We need to delve deep into the issue because even Narendra Modi took up the issue on 14 July and played the same communal tone by sarcastically calling the Congress Party a supporter of triple talaq and other reactionary Muslim personal laws. This shows that the BJP is indeed eager to play the Hindutva card with vigour from now onwards looking at the 2019 Lok Sabha election. This is an evil plan that the democratic and progressive forces must combat and defeat.

Why it’s a problem for Nirmala Sitharaman if the Congress Party, which is one of the opposition parties, claim to be a “party of the Muslims”? Is it a crime to be a party that represents the Muslim voice in Modi-fied India? Was Nirmala Sitharaman frantically waving that copy of the Urdu newspaper during her press conference as a BJP spokesperson or as the defence minister of the country? If she was the latter then can she explain why it’s constitutionally a crime to be a “party of the Muslims” when her own party can trumpet its “Hindutva” credentials with pride and keep on either lynching Muslims through other fraternal organisations under the RSS or send the union ministers to garland convicts of cow-terrorism in Jharkhand? What’s her problem with the Congress being the party of the Muslims when she is neither a part of the Congress Party and the latter isn’t going to impose on her any Islamist diktat?

The other big question that the country and its democracy-loving people must ask to the Modi regime and its culprit ministers who cohabit with convicts of Hindutva terrorism – how can an opposition party trigger a communal riot in the country with the full knowledge of the government? If Nirmala Sitharaman is sure that the Congress is planning to incite riots in the country like it did during its heydays by ironically employing the service of the RSS, then she must give the information to the Ministry of Home Affairs and the latter must warn the public about such a conspiracy while taking preventive measures.

If Nirmala Sitharaman and the Modi regime is so certain about the complicity of the Congress in a plot to redivide the country and trigger communal riots, then they must give proper evidence and the proof to the people and also inform that how the Modi regime is planning to combat the imminent threat. As a responsible government and its minister, she can’t simply put the blame of future probabilities on the opposition and not use the power vested in her own hands and that of her colleague Rajnath Singh to tackle the situation in order to avoid any untoward incident. Her yelling against the opposition parties using the fake news as her shield won’t help her politically to score brownies unless it’s only communal polarisation that the Modi government is relying upon to pass through the 2019 general election and the forthcoming assembly elections in Chhattisgarh, Madhya Pradesh and Rajasthan. Of course, even the children of the country can tell that the BJP needs the Hindu-Muslim binary and diatribe against the minority community to swim the currents of anti-incumbency in the forthcoming elections.

It’s not just a frantic obsession with the Congress or an embedded Islamophobic outlook that’s directing the BJP and its leaders like Nirmala Sitharaman to behave in a particular way. If one observes the way the prime minister, during his recent visit to eastern parts of Uttar Pradesh, reiterated the same allegations founded on baseless grounds against the Congress and questioned it for its stand on Muslim women, whom his Uttar Pradesh chief minister’s close aides even threatened to rape by pulling out corpses from the grave, it became evident that they are peddling Islamophobia following a well-planned strategy.

Narendra Modi must remember that his or BJP’s recent public show of empathy towards the oppressed and exploited Muslim women won’t do any good to the poll prospects of the saffron camp in terms of Muslim women’s vote because it’s the BJP and other progeny of the RSS from whom they suffer the biggest threat of life and rape. The brutality of the RSS-led Sangh Parivar is engraved in every Muslim woman’s mind since the days of Gujarat pogrom of 2002 and Saharanpur genocide of 2013.

Also, for Nirmala Sitharaman, it would do the nation a great service if she stops blaming the Congress for all shortcomings of her government like her boss. Instead, she must know that the Constitution of the country doesn’t bar any political party from representing any particular religion or look into their grievances. She must remember that her party, her ideological mentor- the RSS, and different Hindutva terror groups are doing exactly the same thing. It’s true that the Congress had been complicit in most notorious communal riots since the 1940s, still in the last three decades, it’s her party that’s complicit in all communal polarisation and riots.

The people of India must be made aware of a very vile conspiracy hatched by the RSS and implemented by all of its foot soldiers throughout the country, which targets at flaring up communal conflagrations before the 2019 general election in crucial states like Assam, Bihar, Gujarat, Haryana, Uttar Pradesh and West Bengal. It’s a very well-known fact that after each and every riot, which will be fanned by WhatsApp-run bush telegraphs, the BJP will reap political benefits from the ruins. If the opposition is serious about defeating the BJP, then they must take proactive steps to stop the communal cavalcade of the RSS using their own organisational strength and their focus must not only aim at consolidating electoral victories but also to purge the filth of communal vitriol and polarisation that the BJP and the RSS have done in these few years since 2014.

Nirmala Sitharaman’s xenophobia and Narendra Modi’s communal jibe against the Congress may have helped the toady media outlets and bootlicker TV anchors to reach their Brahminical orgasm, however, it has thrown a great challenge before India and the diverse people over the question of the right of the Muslim community to politically participate in the so-called democratic process. This challenge can’t be resolved by the opportunist opposition parties that swear allegiance to the same powers that have the RSS licking its boot, rather the challenge can be answered only by strengthening the struggle by the exploited, oppressed and marginal people to seize power and establish their own dominating role in Indian politics, economy and society. Only then we can truly purge India of the communal venom injected by the Hindutva fascism and its auxiliary fascism of different hues.