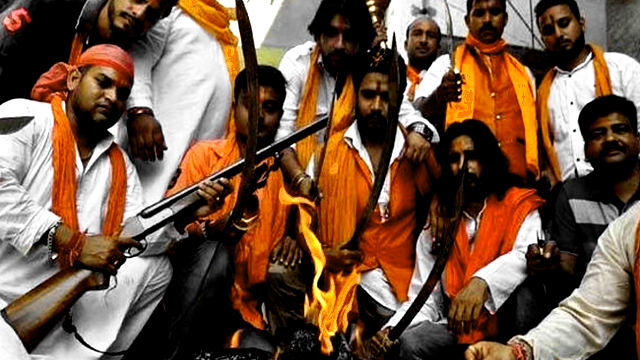 The anti-fascist, left, democratic and progressive forces of India and abroad strongly condemned simultaneous raid at nine locations by the Pune Police and the subsequent arrest of five renowned civil rights activists on falsified terrorism charges as an attempt by the Modi regime to establish a reign of terror, like the emergency imposed by Indira Gandhi in 1975.

The raids were conducted by the Pune Police at the homes of Vernon Gonsalves – Susan Abraham and Arun Ferreira in Mumbai; Gautam Navlakha in Delhi; Sudha Bharadwaj in Faridabad; Stan Swamy in Ranchi; Varavara Rao (Gadar) and his family members, Kranti Tekula and Naseem in Hyderabad; Anand Teltumbde in Goa.

Among them, Vernon Gonsalves, Arun Ferreira, Gautam Navlakha, Sudha Bharadwaj and Varavara Rao were arrested by the police on terror charges for abetting violence and rioting during the Bhima Koregaon clash between Dalits and Hindutva fascists on 1 January 2018.

Varavara Rao aka Gadar is also charged of being involved in a conspiracy to assassinate Narendra Modi, Amit Shah and Rajnath Singh, for which the Pune Police is citing a dubious typed letter purportedly sent by some unnamed “Maoist commander” to civil rights activist Rona Wilson who was arrested along with human rights lawyer from Nagpur Surendra Gadling, Dalit rights activist and journalist Sudhir Dhawale, former Prime Minister Rural Development fellow Mahesh Raut and associate professor of Nagpur University, Shoma Sen in July.

Though the Supreme Court has reprimanded the Pune Police from taking these activists in its custody, it has extended their house arrest till 12 September 2018. The apex court earlier converted their arrest to house arrest looking into the political vendetta sub layered in the allegations levelled by the Pune Police. No such relief came for the five activists including Rona Wilson arrested in July, they continue to languish in prison.

While the democratic, progressive and left-wing forces are vehemently opposing and condemning these raids, calling them a diversionary tactics used by the Modi regime to cover up its failures in controlling unemployment, agrarian crisis, rising price of fuel, falling price of rupees, stagnation of exports, etc., there is a bigger conspiracy in play behind these arrests and media-hyped crackdown on civil rights activists.

Recently, the Maharashtra ATS busted a big network of Hindutva terrorists and recovered a huge cache of explosive material from three people arrested in connection with the assassination of Narendra Dabholkar, a rationalist who was gunned down by the Hindutva terrorists in 2014. Vaibhav Raut (40), Sharad Kalaskar (25) and Sudhanwa Gondhalekar (39), associated with the Sanatan Sanstha, were arrested following raids in Palghar district and Pune, and the Maharashtra ATS slapped the draconian UAPA against them. It’s suspected that the Sanatan Sanstha is operating under the patronage of the RSS, the fountainhead of Hindutva fascism and terrorism in India.

There are possibilities that these men are also involved in the serial murders of rationalists and critical thinkers like Govind Pansare, MM Kalburgi and Gauri Lankesh, as the Sanatan Sanstha and other RSS-affiliated Hindutva fascist terrorist outfits celebrated the death of these people.

Bombs, explosives and other materials of mass destruction were recovered from the possession of the accused trio. Given the occasion of Eid-al-Adha approaching at the time of their arrest, and if one follows the trail of the terrorist attacks launched by the Abhinav Bharat in the past, it would’ve been clear that the terrorists were planning some major strikes during the festival that the upper-caste vegetarian Hindu elites and urban upper-middle class loath for its animal sacrifice ritual.

The corporate-controlled mainstream media and the celebrity anchors of primetime tv shows, who miss no chance to badmouth the Muslim community and spread xenophobia by milling police story on “Islamist terrorism” uncritically, remained absolutely mum or adopted a hush-hush tonality while reporting this big exposure.

Imagine what if it was an Islamic organisation instead of the Sanatan Sanstha? It would have created an unbearable cacophony in a crucial election year and the Hindutva fascist media would have generated so much hysteria among the upper-caste elites and urban middle-class that they would’ve bayed for the blood of Muslims. However, as the organisation is Sanatan Sanstha, with clear links with the RSS, there were no outbursts and no talk on crushing terrorism of “all shades” with an iron fist.

Despite multiple pieces of evidence linking Sanatan Sanstha with the arrested terrorists, one being a leader of its Cow Vigilante wing, no security agency took any concrete step to investigate the Hindutva fascist organisation’s plans. No leaders of the organisation were arrested, no offices sealed and no ban was imposed to curtail its activities.

Rather the entire Hindutva fascist camp united together to defend the Sanatan Sanstha, especially the Hindutva fascist terrorists of Karnataka, where the organisation is playing a nefarious role in instigating communal tension between majority Hindus and minority Muslims.

The ATS launched several raids in few days of August to nab more terrorists associated with the Sanatan Sanstha, however, under some invisible pressure, the pursuance came to a sudden halt and the news went off the radar of the mainstream media. A clear indication of powerful fingers playing with the threads of the ATS came into the picture.

Within few weeks of the trio’s arrest, Bhavesh Patel, a convict of the Ajmer Dargah blast, was granted bail and he received a grand welcome at his hometown Bharuch by the Hindutva terrorists and criminals garlanding him and cheerleading his terrorist activities.

Soon after Narendra Modi-led Hindutva fascist dispensation took over the reins of India, the Hindutva terror masterminds like Aseemanand aka Naba Kumar, Sadhvi Pragya Thakur and Colonel Purohit, who were arrested by the ATS led by Hemant Karkare for their role in executing multiple terrorist attacks throughout the country, got bail and came out of prison.

The release of so many dreaded terrorists from prison under the Modi regime is a serious threat to national security, on which the celebrity prime time anchors will deliver a kilometre-long lecture every night. The self-certified patriot tv anchors, who masquerade as journalists, didn’t question why the NIA weakened its pursuit on the cases of Hindutva terrorism. They didn’t ask why the Indian rulers are discriminating between terrorists and not treating them alike. The servility of these tv show hosts and toady scribes didn’t give them the guts to throw unpleasant questions towards the regime that throws crumbs at them.

It’s not only the Hindutva terrorists earlier nabbed by the ATS under Hemant Karkare, it’s also the immunity that the present dispensation has provided to people like Sambhaji Bhide and Milind Ekbote, the chief architects of the violent attack on Dalits at Bhima Koregaon this year, which keeps them aloof from any police investigation into the root cause of the violence. The people whom the ATS arrested on terror charges, were associated remotely with people like Sambhaji Bhide, whom the Prime Minister shamelessly calls his “guru” and the Maharashtra Chief Minister gives clean chit over the Bhima Koregaon violence without any investigation. Overlooking these things, the Pune Police and the entire state machinery kept hounding the people’s activists to gag the dissenting voices. They clearly were following the diktats of the saffron camp.

In case the Sanatan Sanstha men were planning to trigger bomb blasts throughout the country targeting the Hindu places of worship to flare up communal tension like the one that the RSS and the VHP kindled during the Godhra incident of 2002, where more than 50 RSS supporters were burned alive in a train coach on their way back from Ayodhya, then it would mean that the country is on the verge of a mammoth peril. Any sort of terror attack against the Hindu places of worship will help the RSS to polarise the Hindus against the Muslim community and translate the polarisation into votes in 2019.

While Narendra Modi’s regime is certainly diverting the people’s attention from the major issues that are burning a hole in the country’s economy and society, it’s indeed keeping the options of intensifying communal hatred and spreading xenophobia using false-flag terrorist strikes to polarise the disgruntled majority Hindu community before the 2019 general election.

Due to rising unemployment problem, intensifying agrarian crisis, rampant corruption, including the mother-of-all-scams – Rafale deal, growing income gap and falling standards of living due to a severe economic crisis, the Modi regime badly needs diversionary tactics to keep the public discourse locked on non-issues and in doing it, the false flag of “Islamic terrorism” is suffice. It also builds up a strong voter support for the saffron party.

In a world where the poor are rapidly rising against the predatory corporate-government nexus, nefarious schemes of hoodwinking people and instigating one community against another to break class unity can’t last for long. For the sake of survival, it becomes imperative for the poor to struggle hard against the anti-people government, and it becomes imperative for them to win victory in the struggle and in consolidating the people’s already-won rights and new rights.

If arresting the dissenting voices, if gagging the critics and intimidating those who question could win the Modi-led Hindutva fascist regime few nights of peaceful sleep, then it would’ve been visible on the faces of the rulers quite soon. It didn’t happen. They are still busy vilifying everyone who opposes them, they’re still busy telling people how bad the anti-fascists are, they are still busy covering up the arrest of Hindutva terrorists and the unearthing of a big terror plot hatched by an RSS-affiliated organisation. This fear of the Modi regime is indicating that all is not well with the regime, it’s surely panicked and nervous over the future in which the people will be rising up against its tyrannical rule en masse. Their future fall is inevitable, let them prepare for that.