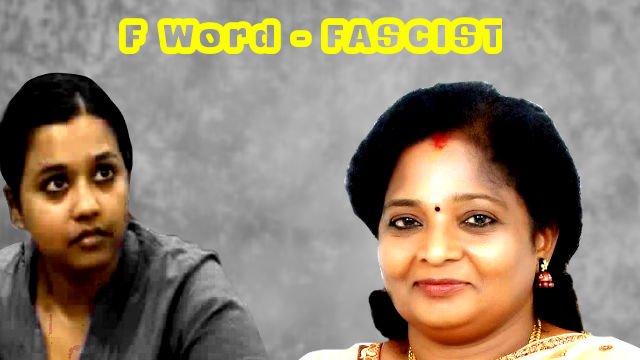 A student was arrested by the Tamil Nadu Police following a complaint lodged against her by the state BJP chief Tamilisai Soundararajan. What was her crime? She used her freedom of expression to call a spade – a spade. She called the Hindutva fascist Modi regime a “fascist” government and for that crime, she was imprisoned by the Tamil Nadu Police.

Sofia Lois (28), who is currently studying in Canada, was on board a flight from Chennai to Thoothukudi, in which the BJP chief was also travelling. When their flight landed, Sofia Lois shouted “down with fascist BJP government” in front of Tamilisai Soundararajan, which irked the BJP chief.

Upon reaching the airport terminal, Tamilisai Soundararajan threatened Sofia Los with dire consequences if she doesn’t stop uttering those words, however, the young girl firmly held to her democratic ideals and raised her fist protesting against the Hindutva fascist BJP-RSS regime, which has been trying to enslave Dravidian people under the jackboots of Hindi-Hindu-Hindutva imperialism.

When it was found that Sofia Lois was a student, Tamilisai Soundararajan ordered the RSS and BJP goons, who came to receive her, to assault the student and her family members. The RSS and BJP goons, servile agents of foreign capital and comprador capitalists, abused and threatened Sofia Lois and her family in public, while Tamilisai Soundararajan ordered the Tamil Nadu Police to arrest the girl and jail her.

Tamil Nadu is now ruled by the BJP’s darkhorse, AIADMK, and the Hindutva bandwagon is expanding its tenacity in the state; the Tamil Nadu Police and the administration oblige the BJP and RSS leaders more than the AIADMK leaders. They arrested and threw Sofia Lois behind the bars immediately but didn’t even file the complaint of Sofia Lois’ father, who wanted to book the BJP leader for threatening and abusing his daughter and family.

Tamilisai Soundararajan, a lackey of Amit Shah and Narendra Modi, is a supporter of the Vedanta Group in Tamil Nadu and pressurising the AIADMK regime to help the British mining giant reopen its Sterlite factory in Thoothukudi, where 13 agitators were killed by the police a few months ago. She never understood the concept of “freedom of expression” or the rights that the citizen of the country, who elects ministers and parliamentarians, enjoy under the rule of the Constitution due to her unconditional faith in the reactionary RSS ideology of hate, servility and violence.

Despite strong condemnation from MK Stalin, the DMK chief, and many of the Dravidian opposition parties, the AIADMK is supporting the persecution of Sofia Lois because she opposed Hindutva fascism with a vigour. It’s not the first instance that the AIADMK has stood by the Hindutva fascist Modi regime and helped it persecute dissenters; the reactionary party has a long history of repressing genuine people’s movement in order to please New Delhi and its rulers.

Thirumurugan Gandhi of the May 17 movement has been booked in more than 40 cases under Goondas Act, NSA, UAPA, etc. He is persecuted for participating in the movement against Sterlite and for speaking against the Modi regime’s complicity in the human rights violation during the anti-Sterlite rally firing.

Student activist Valarmathi was arrested and jailed for months for speaking against the Thoothukudi police firing during anti-Sterlite protests. After she got out on bail, while collecting Kerala flood relief, she was sexually assaulted and then arrested by the Tamil Nadu Police once more. Since then, she is languishing in the Puzhal Jail.

Piyush Manush, actor Mansoor Ali Khan and others were arrested for protesting against the forcible land acquisition by the AIADMK goons for the proposed eight-lane Salem Expressway. They are also booked under Sections 153 (giving provocation with intent to cause riot), 183 (resistance to taking property by the lawful authority), 189 (threat of injury to public servant), 506 (ii) (criminal intimidation) IPC and 7 (1) (a) of the Criminal Law Amendment Act.

Velmurugan, a vehement opponent of the AIADMK regime and the Modi-led Hindutva fascist regime, was arrested two months ago for protesting against the communal politics of the BJP and the RSS. He has been charged with sedition and slapped with NSA.

Civil rights activist Murugan was arrested by the Tamil Nadu Police on charges of being a Maoist in January 2017, and despite no substantial evidence that can prove that Murugan was involved in any act of violence, he’s still languishing in prison.

Advocate Vanchinathan was arrested by the AIADMK regime for providing legal aid to the people of Thoothukudi and he is also slapped with serious charges.

These are not all; since 2011 many more activists and vocal critics of Hindutva fascism are languishing in the prisons of Tamil Nadu. Many of these activists who have got bail from the courts are still hounded by the fascist police force and attempts are made to rearrest them and keep them behind the bars forever.

For Tamilisai Soundararajan, when Sofia Lois called her government a fascist one, it amounted to an assault, a terrorist act. This propelled her action to get the girl arrested and persecuted. She didn’t know what freedom of expression means because she is a fascist and when a fascist finds someone accusing them of fascism, then they persecute the accusers. This is exactly what Tamilisai Soundararajan has done in Thoothukudi and numerous RSS leaders are doing all over India every day.

Hindutva fascism is driving the country towards a darker and most ghastly phase of its existence since the formation of a Republic. People like Tamilisai Soundararajan, who have no regards for democracy or people’s constitutional rights, are now leading the country, and they are using their position to appease and serve big comprador capitalists and their masters, the foreign monopoly-finance capital-owned corporations and banks. It’s for the sake of these corporations and banks that democracy and constitutional rights of the people are sacrificed at the highest altar of the neo-liberal economy by the Modi regime.

It must be reminded to the bunch of hooligan-turned-politicians of India like Tamilisai Soundararajan, or her boss Amit Shah and Narendra Modi that the right to freedom is a Constitution-guaranteed right that the Indian people have won after a tedious and bloody anti-colonial struggle, the very struggle in which the RSS played the role of a British agent and stabbed the people’s back. They must know that no power on earth can take away these hard-won rights of the people, including the right to call a fascist – a fascist, even if they try to undo all rights by using their parliamentary majority. India still needs more Sofia Lois in order to establish an egalitarian and just society. More young women, brave women like Sofia Lois will definitely appear when the people will be able to defeat one enemy of the masses at a time in their massive democratic revolutionary struggle for a better tomorrow.