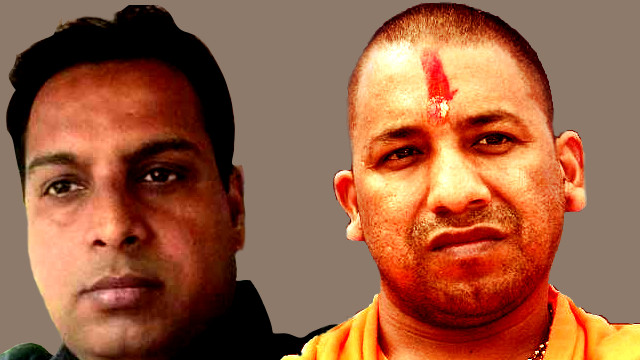 The killing spree with which the Uttar Pradesh Police has unleashed a reign of terror in the state with the patronage of Yogi Adityanath-led Hindutva fascist regime, faced the heat when the police killed an upper-caste Hindu man who hails from a family that had supported the BJP since years. The killing of Apple executive Vivek Tiwari by a group of policemen at Lucknow’s posh Gomti Nagar locality has not only opened the pandora’s box of the staged encounter spree the Uttar Pradesh Police is on since Yogi Adityanath-led BJP government was formed in the state in 2017, it also exposed the cleavage that appeared due to the internal strife between the different sections of the ruling class and the establishment.

While more than 67 poor Muslims, Dalits and backward caste Hindus were murdered by the Uttar Pradesh Police since March 2017 under the garb of fighting crime, the mainstream corporate-controlled press never took any initiative to expose the crimes of the police due to the marginalised caste and class position of the victims. Journalist Neha Dixit exposed the trail of blood used by the Yogi Adityanath regime to feed the bloodlust of the Brahmanical upper-caste vote bank of the BJP and to do an image makeover, which shows how gory atrocities are committed against the poor and marginalised people in Uttar Pradesh by the police and the government, both swearing allegiance to Hindutva fascist ideology utmost unashamedly.

Vivek Tiwari, who hails from an upper-caste Brahmin family and whose family members are vocal supporters of the BJP due to their caste and class position, completely misfitted the frame of Yogi Adityanath’s encounter raaj. This caused a sudden uproar in the state, forcing the opposition parties like Samajwadi Party, the Congress and the BSP raise the issue, though they didn’t protest against the series of extrajudicial killings that the BJP has unleashed to hoodwink the people. The media too milled the story extensively because the “dead” was a Brahmin and a rich man. This is why, breaking the tradition of hailing each encounter death as an “achievement”, the Yogi Adityanath regime retreated on the case of Vivek Tiwari’s killing and offered millions of rupees as compensation to the family along with a government job to his wife. The family members, especially the wife of Vivek Tiwari, were hushed up by deal brokers who settled the matter between the BJP and the Tiwari family.

What made the killers of Vivek Tiwari so audacious that they didn’t think before pulling the gun out and pumping bullets into him? Vivek Tiwari, as per the version of Sana Khan, his accomplice in the car that fateful night, didn’t want to stop the car when the inebriated policemen tried to forcefully stop them and extort money from them. Led by former Samajwadi Party hooligan-turned-cop Prashant Chaudhary and Sandeep Kumar, who have a great clout on the police establishment due to their excellent networking with the BJP and the RSS at present, the policemen were keen to harass the duo at that hour of night, primarily with a plan to molest the woman and blackmail them for a hefty sum of money. When Vivek dodged the policemen and their attempt to forcefully stop the car, Prashant Chaudhary, who is a notorious criminal in khaki, pulled his service pistol and shot at him. Vivek kept driving but crashed after a while.

This story is now known by many and out of the fear of an upper-caste Hindu backlash, the Yogi Adityanath regime has arrested Prashant Chaudhary and Sandeep Kumar despite the duo yielding a massive influence on the Uttar Pradesh Home Ministry. These two even fuelled a police rebellion in their favour by encouraging constables to wear black armbands in protest and it’s reported that a mass leave will be taken by policemen from 2 January 2019 onwards in support of the duo. It’s not a rebellion of the policemen against the highhandedness of the Yogi Adityanath regime or the reign of terror that’s unleashed on the poor and marginal people by the police state, it’s rather a protest against losing the privilege of legal immunity by the policemen.

The Yogi Adityanath regime will not stop or put any blanket ban on encounters now, as it’s a psychological weapon it’s using to impose the caste-religious supremacy of the upper-caste Hindu elites and upper-middle-class on the entire population of Uttar Pradesh; it’s Yogi Adityanath-led regime’s weapon to subjugate and enslave the Dalits, terrorise the Muslims and keep the other backward castes disunited against the state’s repressive measures.

Vivek Tiwari’s extrajudicial murder enquiry will end up in the blind alleys like thousands of such cases and after years, Prashant Chaudhary and Sandeep Kumar, who have earned millions through recruitment scams, extortion and blackmailing, would remain scot-free from any sort of legal prosecution. With the family members of the victim Vivek Tiwari accepting the huge compensation offered to them by the Yogi Adityanath regime as part of a deal to remain silent, and with Sana Khan, who is already threatened with dire consequences and is in a mental trauma due to the incident, planning to leave Lucknow, the case will have no pursuers, no chasers, which will hasten its inevitable death.

Unfortunately, the family members of the victims of hundreds of encounters staged by the Uttar Pradesh Police, including the recent “on-camera encounter” at Harduaganj of Aligarh, aren’t in a position, due to their socio-economic backwardness, to pursue or build up massive mass opinion in favour of their case, which would have moved the press to reluctantly show their part of the story too. The police pressure on them, the threat by the Hindutva fascist goons and the government’s repressive steps against them have collectively gagged these family members and turned them silent like their dead kin.

Yogi Adityanath, who happens to be a loyal lackey of foreign corporations, Indian comprador capitalists and feudal landlords, wants to portray himself as a crusader against crime. The BJP promised to end the mafia rule that the Samajwadi Party and the Bahujan Samajwadi Party established in Uttar Pradesh. Rather than ending it, the BJP has either replaced the mafia dons of the erstwhile regimes with its own, or it has established the tyranny of the police state where there was no mafia rule earlier. All mafia and criminals from upper-caste Hindu strata have joined the BJP in large numbers during 2016-17 and by now there’s absolutely no powerful criminal gang in Uttar Pradesh that isn’t patronaged by the Yogi Adityanath’s regime.

This switching of allegiance by criminals have left the Samajwadi Party and the Bahujan Samaj Party with only those criminals and mafia who belong to backward castes, Muslim community or are Dalits. Their presence isn’t going to change the muscle power equation in Uttar Pradesh and the BJP will continue to sweep elections by using this newly-found herd of musclemen. However, with all the criminals under its umbrella, the Yogi Adityanath regime now need purported enemies of the state apart from the “Jihadist” Muslim community, which it has already branded as a top-most enemy of the government. Thus comes the scope of “encounter raaj”, in which fake FIRs are filed against youth from Dalit, Muslim or OBC community and they’re picked up by the police and then shot dead.

In all of these “encounters”, the police have filed similar or at times, contradicting multiple FIRs and used past cases, even some petty cases, to justify their killing. The hapless family members of the victims are not in a position to seek justice for them from the court of law, which now works according to the whims of the RSS and its strongmen. Their plight and agony go unheard, as the klaxon of a “crime-free” Uttar Pradesh is blown strongly by the upper-caste elite and upper-middle-class supporters of Hindutva fascism, of which, probably, Vivek Tiwari used to be an inalienable part.

It’s imperative for all democratic, secular and anti-fascist political and social organisations working in Uttar Pradesh, excluding the mainstream parliamentary parties like the Congress, SP or BSP, to unite and launch a massive people’s movement from the grassroots against the police atrocities and challenge the authority of the police that even the Constitution has not granted them, with which they arbitrarily arrest and shoot innocent people from marginal and oppressed communities. It’s imperative that the people, the poor masses who are vulnerable to police atrocities, are politically and organisationally equipped at village levels to fight against the police atrocities and the feudal oppression that’s laden on them by the Thakurs, Brahmins and other caste groups aligned with the BJP. It’s not by wailing for justice before the television cameras, but by building a sustainable and protracted movement that the aggression of the state against the marginal community members and the poor can be thwarted and the reactionary Hindutva fascist Yogi Adityanath regime can only be defeated. It’s not imperative to take this step only for the marginalised people, even privilege “exceptions” like Vivek Tiwari would need such a movement to prevent any mishap in the future.