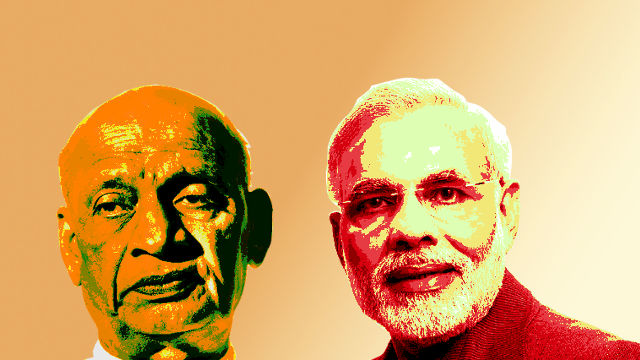 Ever since the Narendra Modi-led BJP government was formed, everything that the previous governments and the Indian state’s own propaganda credited as the quintessential binding factors holding the country together as a united nation, started falling apart, quite unequivocally, paving way for new fissures to appear and widened the crack in the pot called India.

The self-styled ‘nationalist’ and ‘patriotic’ Modi government went berserk against all opposition forces to portray itself in positive lights. It created useless discourse on ‘patriotism’ and ‘nationalism’ ever since the facade of the promised ‘development’ started falling off. To dodge the questions on its total failure in uplifting the lives of people, the BJP resorted to rhetoric mongering on ‘nationalism’ and the prime minister himself started blaming the Nehru government of the 1950s and 1960s for his own failures at present.

Building statues of those individuals whom the Hindutva fascist brigade, led by the RSS, considers crucial for its ‘Hindu Rashtra’ or a Hindutva fascist state scheme, has become a focus area for the government. The Modi regime is rampaging the nation in a statue building spree. Now, the BJP has nothing in its kitty of achievement to hold the ‘nation’ or unite the people but a 182-metres-tall statue, the Statue of Unity, modelled on the first home minister of Indian dominion – Vallabhbhai Patel.

This mammoth made-in-China statue, which costed Rs 29.89 billions to the public exchequer, along with forceful eviction of thousands of tribals from their land, deforestation and destruction of ecological balance in Gujarat, is now showcased as an achievement by the Narendra Modi regime, which has abetted hate crimes against the minority Muslims, Christians and the Dalit communities throughout the country and wrecked the unity of the people with massive communal polarisation drives.

A detailed report is published by the India Spends portal on what alternatives India could have got for itself in case the money was spent on other priority sectors like health, education, agriculture or poverty alleviation. It’s a well-known fact that commonly held economics knowledge is a topic of fuss in the Modi cabinet, where only one man’s whims are popularised and turned into policies without ascertaining their dangerous repercussions. The establishment of the statues of Vallabhbhai Patel and the medieval Maratha ruler Shivaji are part of this whimsical fancy of the regime’s top boss who is keen to see PR and brand imaging overwhelm the public demand for food, clothing, housing and employment throughout India.

The RSS and the BJP are vouching that the Statue of Unity, constructed by displacing people and harming environment, would become a tourist attraction and will generate huge income for the local people, while at the same time boost ‘patriotism’, which is, of course, Hindu patriotism for a purported ‘Hindu nation’ that never was.

However, such claims are unfounded as most Indian tourists, except the pilgrims, visit holiday locations in hill stations, sea beaches or national parks for their holidays, and take less interest in statues or modern artefacts, unlike the historical monuments, for which there has been a constant interest among generations of Indians. No tourist will take a long ride to a place where there is just a giant statue and nothing else to see.

While there are talks about income generation, more than 75,000 tribals of over 72 villages of Narmada district are badly affected by the statue and there are 13 villages where neither the tribals received their promised compensation nor the employment opportunity promised by Narendra Modi. Cheated and intimidated, these tribals are fuming in anger against the BJP and its divisive politics, especially the notorious corporate appeasement by the party and its government.

As the entire amount allocated for building the statue went to China, the Indian workers got very little work in the due process. Not much employment was generated for the local populace for the construction or establishment of the statue. This is a reason why more and more tribals are joining the protest against the Statue of Unity, the Modi regime and the Vijay Rupani-led BJP government of Gujarat. Though the state is now flexing its muscle, trying to forcefully dispel the agitating tribals and farmers, the strong anti-incumbency wave in a crucial election year is crippling the government’s ability to overcome this self-made crisis using brutal force.

The Statue of Unity is a middle-class’ fancy but a death warrant for the poor. A Rs 29.89 billion statue in one of the poorest districts of Gujarat is a farce and this is why the tribals came out to protest, demanding schools, hospitals, electricity and above all – an employment opportunity that can feed their families two square meals a day. The Modi regime has no time for the agony of the tribals or farmers but it’s working constantly to serve the broader interests of the big corporate players like Ambani, Adani, Vedanta, Patanjali, etc., for whom all laws are relaxed, people’s rights are overturned and environment is sacrificed at the highest altar of corporate greed and lust called – ‘development’.

By fracturing the unity of the nation achieved through the people’s collective struggle against colonial rule, the Modi regime has already disunited a united people. The rabid communal hate mongers who call themselves patriots and nationalists have sold the interests of the country to the big foreign corporations, banks and their indigenous comprador allies. With the help of a bronze statue built with the hard-earned money of the taxpayer common people, the Modi regime or the Vijay Rupani-led BJP government of Gujarat cannot wither away the mass discontent that’s rising against its own fascist and reactionary rule throughout India.

The Statue of Unity or a Shivaji statue will neither unite the people nor instil patriotic feelings in their hearts. The base of the unity among the people of India is their common struggle against imperialist loot and plunder of Indian resources and labour. It’s only when the diverse people of India are united against their common enemy, i.e. big foreign corporations, Indian comprador and crony capitalists and the big feudal landlords that a strong, durable and quite robust unity of the people can be achieved. No power on earth can thwart such unity among the people who will call themselves one.