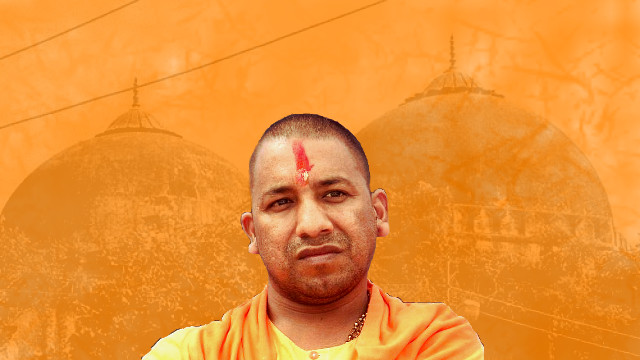 Yogi Adityanath divulged his government’s Ayodhya plans during his visit to the town. The plans include two controversial things – one, the construction of a Ram temple at the site of the demolished Babri Masjid, and two, land acquisition for the construction of an airstrip to allow tourists to come to Ayodhya for pilgrimage. Yogi Adityanath’s government, following its recent spree of renaming prominent places from Muslim names to Hindu names, also renamed Faizabad district as Ayodhya. The government has proposed a medical college in Ayodhya, which will be named after the mythical character Dasharath from the Ramayana. Yogi Adityanath is also going to construct a giant Ram statue at Ayodhya using money from public exchequer.

The 15th-century Babri Masjid was demolished by the Hindutva fascist thugs of the RSS-led Sangh Parivar on 6 December 1992 and ever since then the site is under the control of the central government and a case on the land dispute between the Sunni Waqf Board and Ram Janmabhoomi Nyas is still subjudice in the Supreme Court, which will be heard by the court from January onwards.

As the matter is subjudice, the Uttar Pradesh chief minister’s continuous rhetoric mongering over the proposed construction of a Ram temple at the site of the demolished Babri Masjid is an attempt to subvert the judiciary, whose independence, credibility and ability to deal with the pressure exerted by the Narendra Modi-led BJP government are now under public scrutiny. By claiming that only a Ram temple will be allowed in Ayodhya, the Uttar Pradesh chief minister not only expressed his own bigotry but also exemplified how the Constitutional values, independence and democracy are under threat in his rule. His declaration is a euphemism clarifying the fact that the RSS and the larger Hindutva fascist family led by it won’t accept any verdict that goes against its Ram temple demand from the apex court.

The establishment of a Ram temple is a long-term demand of the Sangh Parivar in Ayodhya, which the Hindu mythologies call the birthplace of Rama, a Kshatriya Aryan king. This ‘Ram Mandir’ has no actual substantial benefit for the majority of the Hindus of the country, who are poor, destitute and hardly manage two meals a day for their family members, however, it’s a mirage that’s used to drive a wedge between the Hindu and Muslim poor, to turn them into two hostile, antagonistic camps so that the big corporations, feudal landlords and foreign capital can exploit the resources and labour of India without fearing for any backlash from the people.

By shamelessly announcing the diversion of public money, which is paid by all sections of the society, especially by the poor, through direct and indirect taxes, for construction of statues, temples and declaring the intention to grab the land of the farmers, mostly from the backward castes, for the construction of an airstrip that’ll cater to the needs of the rich Hindus, the Yogi Adityanath regime has declared a war upon the poor people of Uttar Pradesh.

At a time when the state is reeling under a huge financial crisis, the farmers are facing a mounting menace of debts, the agriculture sector is suffering due to low returns on investment, high fuel price is driving the farmers towards destitution, the working class is losing regular jobs and are depending on contractual labour, the health care sector and education sector are in a tumultuous state, and the poor, marginalised and oppressed people of the whole state are engulfed by the fear of police terror, then the construction of a giant statue, a grand temple and an airstrip using public money is a crime against the people of the state, whose interest the chief minister took an oath to protect. The abject mockery of Constitutional values by the saffron camp, while parroting some statutory lines over respecting the Constitutions and institutions, is such a regular affair now that any attempt by the Modi or Yogi regime to follow the Constitution will appear quite fringe.

Yogi Adityanath is strategically placed at the helm of the state to drive communal polarisation to the extreme and also build his own image to become the heir apparent of Narendra Modi. The ‘development’ and ‘strong man’ narrative built around Narendra Modi are already used in making brand Yogi Adityanath, whose stature in his first term is quite higher than the other long-term BJP chief ministers like Shivraj Singh Chouhan, Raman Singh or Manohar Parrikar. His influence over the state BJP is immense even though his roots were not in the RSS and his organisation, the militant Hindu Yuva Vahini, continues to operate as a separate militia in the state, raking up communal tension, riots and arsons at different places.

Now, Yogi Adityanath, using his post of the top clergy of the Gorakhnath Math- a renowned spiritual centre for the Hindus of eastern Uttar Pradesh, is trying to exploit the religious sentiments of the Hindus of Uttar Pradesh and the entire cow belt. His proposal for building the temple of Ram at the place of the demolished Babri Masjid is an attempt to incite the communal jingoism among the upper-caste Hindus and unleash a new wave of violence on the marginalised minority Muslims in the state. Yogi Adityanath is trying to pose the question of Ram temple as a question of ‘Hindu pride’, which is how the RSS and its affiliates have marketed the issue since the 1950s.

This aggressive posture of Yogi Adityanath over the Ram temple will help the RSS and the BJP to retain its political supremacy in Uttar Pradesh and the entire north Indian cow belt. The Ram temple agitation helps the BJP to polarise the Hindu voters, especially it helps the party to wean away the Dalits and backward caste Hindus by spreading xenophobia. Now that the BJP enjoys an absolute majority in the parliament and the state assembly, the Yogi Adityanath regime is able to carry out its communal agenda without fearing any backlash from any institution of the government, including the Supreme Court.

But can this Ram temple drive or the construction of the giant Ram temple again help the BJP to retain its political supremacy in Uttar Pradesh? No, it can’t. Though the BJP may retain power by involving the state machine shamelessly to help itself elected by duping the people, it can’t politically cash on the issue of Ram temple, which is more or less centred among the elite and middle-class Hindus and Jains of the state, to dupe the poorest of the poor in the state. The non-fulfilment of several poll promises, including the hike of MSP of sugarcanes, clearance of sugarcane farmers’ dues from sugar mills, increasing MSP of crops, debt waiver, easy access to public health, education, etc. and jobs to the unemployed jobseekers turned the majority of the poor and the lower-middle class people of the state, including the majority of Hindus, Dalits, minority communities, against the BJP and Yogi Adityanath.

The last nail in the coffin of the Yogi Adityanath regime will be the land acquisition drive in Ayodhya, which will irk a large number of farmers who are already reeling under the burden of an economic crisis due to the apathy of the BJP government. The forceful land acquisition drive will trigger a major conflict between the unwilling farmers, farm labourers, mostly from Dalit and backward caste communities, and the state machinery. As the state will resort to severe violence to have its diktat implemented, therefore, it will result in a major political catastrophe for the BJP in the state and also out of Uttar Pradesh.

It’s evident that the BJP will keep on playing the Ram temple card despite the fact that the temple can’t be constructed before the 2019 general election even if all objections are cleared by a magic wand. As the Modi government failed to deliver its promised ‘better days’ to the people of the country and the Yogi Adityanath regime failed to provide any relief to the poor of the state, thus, it’s only religion and bigotry that will be used by the duo to help the saffron fascist camp sweep the 2019 general election. However, the unpredictable people’s movements against the fascist oppression laden on them will become a serious challenge before the BJP and the RSS, which the Hindutva fascists won’t be able to overcome by calling the lord of Ayodhya or by cracking down dissent using the ‘Urban Naxal’ tag. The doom of the Hindutva fascist camp in India is as certain as its meteoric rise powered by big corporate funding. The time is ticking fast.