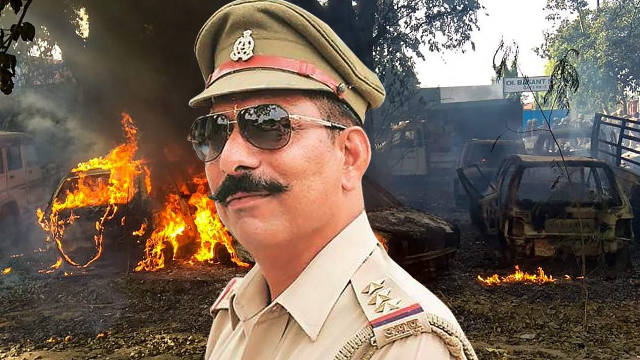 Uttar Pradesh is again in news for all the wrong reasons due to a massive mob violence in Bulandshahr, where a police officer was killed by Hindutva fascist terrorists during their attack on a police station.

The policeman killed in firing, Inspector Subodh Kumar Singh, was the investigating officer in the infamous Dadri lynching case, where a gang of Hindutva terrorists lynched a 54-year-old man, Muhammad Akhlaq, in 2015, opening the floodgate of beef lynchings throughout India.

An upright officer, Singh managed to send the meat in Akhlaq’s freezer to the forensic laboratory that confirmed it’s goat meat. He was instrumental in having the accused arrested and that resulted in his transfer from Dadri to Bulandshahr.

The rioting by a feral mob consisting of Hindutva terrorists of Bajrang Dal, Hindu Yuva Vahini, the RSS and the BJP didn’t start spontaneously. It has a deep connection with the political situation in western Uttar Pradesh where there is a large-scale migration of political loyalty in the recent days.

The cow slaughter issue was selectively raised by Bajrang Dal terrorists when a large number of Muslim pilgrims are going to Bulandshahr for the Tablighi Jamaat’s ijtema (a religious meet). This visit by Muslims is helping to bridge the difference between the Hindus and Muslims of the region, which wreaked during the wake of the Muzaffarnagar pogrom in 2013 when hundreds of poor Muslims fled the small town and its nearby mixed-community villages fearing for their lives.

According to news reports, local Hindus in the Jainpur village of Bulandshahr even opened the gates of their Shiva temple for the Muslim pilgrims to offer Namaz. Many organisations are working overground to bring the communities together through trust-building measures and collective efforts.

With the Jat voters turning their back towards the BJP in western Uttar Pradesh, which was visible in the voting pattern seen during the 2018 Kairana Lok Sabha bypoll, the Hindutva fascist camp got frightened as it’s helplessly watching its polarisation exercise, done through the 2013 Muzaffarnagar pogrom, falling apart.

This fear of losing hegemony is forcing the BJP and other Sangh outfits to incite communal pogroms over sensitive issues to the majority community like cow slaughter, Ram temple or the leitmotif – ‘love jihad’. To retain its hegemony on western Uttar Pradesh, the BJP has initiated several campaigns to spread renewed vitriol against the Muslim community, especially in rural areas.

The xenophobia spread by the RSS-led Sangh Parivar though still has takers, however, due to the intensification of economic crisis like rising prices of petrol and diesel, rising debts of farmers, unavailability of fair MSP for crops, deteriorating public healthcare and public distribution system, rising unemployment and falling wages, the intensity of the Hindutva fascist propaganda is thinning and the people are becoming aware of the conspiracies hatched by the Sangh Parivar to distract them and divert their attention from the core issues. Thus, more farmers from the region are joining the rallies against the Modi government rather than showing any support to the Ram Mandir agitation by the VHP.

Amidst this situation, when the Bajrang Dal members claimed that they have found cow carcass allegedly spread on the farms of Mahav village, Bulandshahr, a ruckus was created to stir a communal frenzy among the villagers. However, the exercise became futile as not many of the common Hindu villagers could be mobilised by their theatrics.

Only the hardcore Hindutva fascists and reactionary, upper-caste feudal forces could be cajoled to join the bandwagon. To keep the tempo highly amplified, the Bajrang Dal, the RSS and Hindu Yuva Vahini attacked the police chowki (sub-station) at neighbouring Chingravathi village and attacked the policemen stationed there by accusing them of colliding with the ‘Muslim cow slaughterers’.

When Inspector Subodh Kumar Singh, along with a reinforcement of few constables and home guards reached the spot to save the policemen entrapped in the Chingravathi village chowki, the Hindutva fascist terrorists started firing at them, to which the policemen retaliated. While Subodh Kumar Singh was shot, the police firing hit a bystander called Sumit, whom the BJP is trying to proclaim as their men, which his family members are denying.

A video shot by unknown people showed few men approaching the Tata Sumo to see whether the police officer is shot or not, they found his body hanging out of the car’s open door, his head touching the ground, and one of the men was found asking ‘yeh wohi officer hain na?’ (he is that officer, no?). It’s not known whether they were the men who shot him or were just curious bystanders. Still, their question about Subodh Kumar Singh is raising questions over the real reason behind his killing. It may be possible that alike Hemant Karkare of the Maharashtra ATS, Subodh Kumar Singh was eliminated to stop him from delving deeper into the Hindutva fascist terror network.

Following the riot-like situation, the Muslims who were leaving Bulandshahr after the Tablighi Jamaat’s ijtema ended had to seek safe shelters to save themselves from the wrath of the Hindutva terrorists, who have been looking for the Muslims everywhere to kill and torture. The RSS laid the blame of the cow slaughter and the attack on the police upon the participants of the Tablighi Jamaat’s Ijtema. The RSS’ propaganda outlets started spewing venom against the Tablighi Jamaatis, with whom the local Hindus tried to improve their ties, even though video and other evidence proved that the violence was perpetrated by the Hindutva fascist terrorists.

Sudarshan channel, a hardcore Hindutva terrorism supporter tv channel, published doctored content and fabricated information to blame the Muslims for Subodh Kumar Singh’s death. The RSS’ men are vehemently denying their role in this killing as the public outrage against the BJP and the RSS involvement intensified in the last few days. Their fear and their inability to transfer the blame on the Muslims pushed them to the retreat. Despite having legal immunity in Uttar Pradesh, the Hindutva terrorists are booked in the case, which is a set-back, even a temporary one, for the RSS-led Hindutva fascist camp and the BJP before 2019 general election.

‘Gau Raksha’ or cow vigilantism has contributed immensely towards the incessantly growing list of gory atrocities against the minority Muslim community since Narendra Modi ascended to power. Despite him condemning the Gau Raksha violence and the RSS chief also making strong opposition to the violence by the cow vigilantism, nothing was done by the BJP to curb the menace.

The Gau Rakshaks, who form the core vote bank of the BJP, is also a big source of Sangh’s non-corporate income. These hoodlums, who are hired, trained in violence and armed by the RSS and the Bajrang Dal, run a pan-India extortion racket targeting transporters ferrying cattle and out of them if someone happens to be a Muslim, the Gau Rakshaks kill them.

The Hindutva fascist rabble-rouser and chief minister of the state, Yogi Adityanath has adopted the strategy that he used during the killing of Apple executive Vivek Tiwari in Lucknow to wade through the pool of criticism. After announcing a compensation of ₹5 million for the family, he also promised one job and ‘extra-ordinary’ pension for Subodh Kumar Singh’s family.

Through this high amount of compensation, he may be able to gag the family from expressing dissent against the government in public, however, the anger of the people against the Gau Rakshaks, against the Hindutva fascist thugs, who not only instigate communal violence but also extort money from local traders, will not subside so easily. The people’s anger was visible throughout Bulandshahr and the majority of the Hindus were not buying the Bajrang Dal’s story about a Muslim conspiracy behind their act.

Though built with too much labour of the RSS and its fascist footsoldiers, the Hindutva laboratory of west Uttar Pradesh is slowly slipping out of the grip of the saffron camp due to the intensification of the economic crisis that’s directly affecting the farmers, the sugar cane farmers to be precise, whose legitimate demands for better crop prices and release of sugarcane dues from sugar mills not only felt on deaf ears but the Modi regime and the Yogi regime didn’t shy to use brutal state violence against these farmers when they rallied in Delhi and Lucknow.

The fall of the saffron camp, village by village, can only happen through the help of a protracted struggle by the exploited peasantry, rural poor and oppressed people. Only by uprooting the autocratic rule of the upper-caste feudal landlords, who form the core support base of the BJP, the people would not only be able to free themselves from the menace of cow terror, but also from the severe economic crisis they are a quagmire in. Until the time these forces hostile to peace, secularism and democracy aren’t defeated, more men like Subodh Kumar Singh may be killed to appease the bloodlust of the Hindutva fascist terror industry.