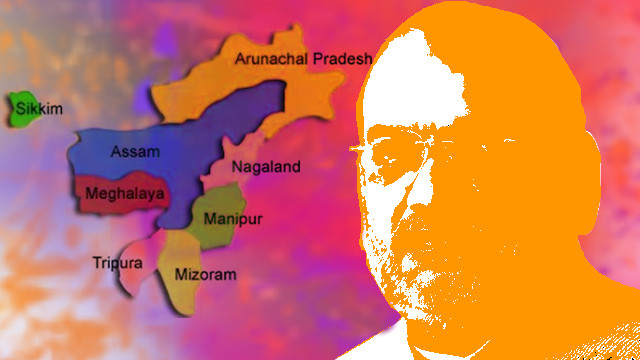 The ongoing rhetoric mongering by the chieftain of the Hindutva fascist BJP– Amit Shah, especially during his recent rally in Malda of West Bengal, over the NRC and the Citizenship (Amendment) Bill, 2016, indicates that the BJP and the Modi regime are under severe stress as the Lok Sabha polls are nearing and as there is a nationwide disbelief rising over the way the EVMs function, which would cause severe problems for the party to hack them this time.

The impenitent bigot Amit Shah didn’t relent to show his utmost frantic vote bank appeasing endeavour when he loudly declared that all Bangladeshi Hindus will be granted citizenship and Hindus, Sikhs and Buddhists have “no reason to fear” the NRC. These utterances clearly indicate that in the days to come, the BJP will use all communal weapons in its arsenal to polarise the Bengali Hindu immigrants and try to instigate them against the Bengali Muslims.

Amit Shah’s claim that the Citizenship (Amendment) Bill, 2016, will legalise the Bangladeshi Hindu immigrants and grant them citizenship of India, thereby saving them from the wrath of the NRC, while only persecuting the Bengali Muslims with the excruciating programme, challenges the Constitution and the Fundamental Right to Equality enshrined in its Article 14, which disallows any sort of discrimination on the basis of people’s religion or place of birth. It’s indeed a clear signal that despite a large wave of anti-Citizenship Bill protests and demonstrations in Assam and other states of the North East, neither the BJP nor the RSS will budge from its position and will continue with its drive a wedge between the Bengali Hindus and Bengali Muslims.

If Amit Shah is telling the truth to the Bengali Hindus that the Citizenship (Amendment) Bill, 2016, will allow them citizenship on a cut-off date of 2014, then it’s actually opposing the notorious Assam Accord signed in 1985 between the Assamese chauvinists and the Rajiv Gandhi-led Congress government, which has fixed 25 March 1971 as the cut-off date to consider someone a ‘foreigner’.

Anyone, as per the Assam Accord, 1985, who entered Assam after that date are considered foreigners and will be deported. It’s to find out exactly who all have entered and started living in Assam on or before 24 March 1971 that the National Register of Citizens (NRC), with its whimsically decided norms, started enrolling and authenticating citizenship records. In the final draft prepared by the NRC, which was published in June 2018, four million people were excluded out of 32.2 million people who went through the process.

One must see that the majority of the Assamese people, incensed with chauvinism and hatred against Bengali Hindus, are opposing the communal nature of the Citizenship (Amendment) Bill, 2016, even though they have a deep hatred for the Bengali Muslim community. The vitriol is spread against the Bengali Hindus now as the Assamese chauvinists are seeing the danger of BJP’s major political agenda in the region, which cost it the severance of ties by its old allies and irked many constituents of its dream project- North East Democratic Alliance (NEDA)– filled with over ambitious and utmost corrupt politicians of the region.

Why Amit Shah and the Sangh Parivar are taking an aggressive posture on the Citizenship (Amendment) Bill, 2016, deploying its battalion of bigoted, Hindutva-infected, rotten-brained nincompoops, who mask as ‘public intellectuals’, to defend the bill even knowing that it will become a nemesis for the BJP in the entire North East? Are the 42 Lok Sabha seats of West Bengal more lucrative than the total 24 seats, including 14 from Assam? Is the BJP ready to sacrifice its entire presence and domination in the North East in return of power in West Bengal?

The answers to these questions can’t be analysed in mere yes or no, because for the BJP, the gameplan is not simple electoral arithmetic but to ensure the ideological and organisational supremacy of the RSS have been achieved in the entire eastern and northeastern parts of the Union of India.

The actions of Amit Shah and the Modi regime have deep significance than what can be gauged through the simple lens of parliamentary politics. The BJP definitely needs votes, but apart from that it also needs to secure a polarised support base that can be ideologically servile to its greater scheme of Hindi-Hindu-Hindutva.

According to the RSS’ vision of one language, one religion and one set of customs, the BJP wants to establish Hindutva fascism as a guiding political ideology and social rulebook for the entire North East. This is a reason that before foraying into the Bengali Hindu heartland of West Bengal and Assam, the RSS employed the services of a lot of Hindu religious proselytisers to propagate their version of Brahminical supremacist, bigoted and radical religion. The RSS followed the suit and later, the BJP entered with its election symbol.

Tribal people, indigenous people are still in majority in the seven northeastern sister states, which remain under the control of Indian jackboots as they hold important mineral resources and strategic importance for India to militarily deal with its bete noire- China. The demography of North East will otherwise foil the RSS’ vision of turning this part into an ideological colony of Nagpur and thus, only the Bengali Hindu migrants can play a pivotal role in helping it materialise the vision.

Evicted from their homeland, brutalised and humiliated due to their religious identity, the Bengali Hindu immigrants from former East Pakistan and present-day Bangladesh have suffered a lot at the hands of Islamist fascists and bigots. The trauma caused by Islamist oppression still remains like an open wound for many as the periodic flush of refugees from Bangladesh, suffering similar ordeal due to their minority status in the country, doesn’t allow any healing.

To rub salt on the wound, the RSS is present with its incessant vitriol mongering and Islamophobic propaganda that never lets the Bengali Hindu immigrants forget and move on. Such hatred, fanned by the Hindutva terrorists, converts many Bengali Hindus into radicalised Hindutva fascists and they easily become pawns for the Nagpur-based RSS against the progressive, democratic and anti-fascist camp on one hand, and the Bengali Muslims on the other.

The RSS knows that if citizenship rights are given to the Bengali Hindus who are still illegal immigrant in the books of India, then it will create a large-section of loyal supporters for the party that will help it establish its hegemony in the entire North East by changing the demographic equation in maximum parliamentary seats.

Clearly, Amit Shah and the Hindutva fascist clan, that’s prospering under Narendra Modi’s patronisation, want to bring a drastic change in the Indian political scenario by using sheer muscle-power and violence. The Citizenship (Amendment) Bill, 2016, didn’t come out from the RSS’ or the BJP’s pure love for the Bengali Hindus, whom they want to Hindify and customised according to the North Indian Brahminical template of Vaishnavism, rather, it’s a clear and concise agenda by the saffron camp to create an environment where it can have a loyal support base that will not only support its communal agenda but will also act as its footsoldiers against the Muslims, Christians and tribal people of the region, whenever the need will arise.

This agenda of the BJP to give the Bengali Hindus citizenship rights through the Citizenship (Amendment) Bill, 2016, isn’t going to end the trauma of the NRC, rather make it an exclusive pain for the Bengali Muslims to deal with. The danger of this divisive agenda isn’t anymore confined within Assam, rather it has reached West Bengal as well, and the BJP will keep exploiting the Islamophobic sentiments of the majority of upper-caste Bengali Hindus to gain sympathy and win elections, one after another, in the state where workers’ and peasants’ struggle deterred the advance of the saffron camp for many years.

The peril of blood and macabre nature of communal violence is waiting at the corner for the people of all religions and ethnicity in the North East and West Bengal, which will eventually help the BJP and the RSS grow strong. As they will grow stronger, the common people’s rights will be violated, the democratic space will shrink and wither away, and, above all, the common people will be brutally enslaved for the services of the big corporate capital.

It’s to stop the realising of such a mammoth scheme, it’s to prevent the flaring up of communal violence, bloodshed and extreme division among the common people, one needs to build up and intensify a broad, strong and effective series of an anti-fascist movement against the juggernaut of Hindutva fascism.

For Bengali Hindus, Bengali Muslims or the indigenous people of the seven northeastern state, both NRC and the Citizenship (Amendment) Bill, 2016, are divisive foes that aim to crack their unity and instigate communal violence and push them towards endless fratricidal violence. It’s imperative for the Bengali immigrants of all religions, the indigenous people and the tribals of Assam and all northeastern states to unite against their common exploiters- those who plunder their resources and their Hindutva fascist protectors. It’s imperative for the Bengali Hindus, the tribal and the Bengali Muslims of West Bengal to resist the joint onslaught by the RSS, BJP and their secret ally, the Trinamool Congress.

If the unity of the people is not built, consolidated and strengthened from the grassroots upwards with a vision of defeating the common enemy of the people- Hindutva fascism, then the future of the entire North East and West Bengal will be as gloomy and bloody as much the RSS and its progeny would prefer. It’s important to thwart that evil plan through the collective action of the majority of the people- the poor and toiling people. For the sake of the victory of people’s democracy, secularism and equality, both the clan of Amit Shah and their weapons like the NRC and the Citizenship (Amendment) Bill, 2016, must be opposed and resisted vigorously and uncompromisingly.