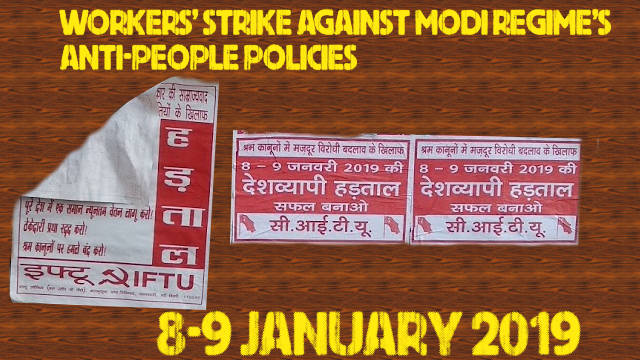 The working class is observing an unprecedented all-India strike on 8-9 January 2019, following the decision of the National Convention of Workers, held on 28 September 2018 at New Delhi. The workers are striking against the anti-labour, anti-farmer and anti-people policies of the anti-national Modi regime, the very policies that are throwing the common people, the toiling masses into the dizzying chasm of destitution and economic devastation.

Few of the major demands of the working class are: scrapping of the anti-worker amendments in the Labour Law and Trade Union Act, 1926; disbanding the contract labour system and exploitation of workers through it; end to the loot of public money through the disinvestment of public sector units; immediate implementation of minimum wages for workers and scrapping of all anti-people policies. The 8-9 January workers’ strike received solidarity support from the farmers, who are joining the ranks against the Modi regime and will also observe the strike in different parts of the country.

This decision of two-day-long strike, called by the 10 central trade unions (CTUs), comes in the wake of the Modi government’s refusal to scrap the proposed amendments in the Labour Law and the Trade Union Act 1926, which will make these colonial-era rules more reactionary than ever and snatch away the minimal right to organise and negotiate a better deal with the employers from the working class. Only the RSS-affiliated scab, the BMS, stands with the government on the issue, and by using the emotive tug of religion and bigotry, it’s preventing a large number of workers under its influence from participating in a major struggle and is going to use them to break strikes and attack strikers at the behest of the Indian rulers.

The 10 CTUs called two strikes earlier, on 2 September 2015 and 2 September 2016, against the Modi government’s attack on the rights of the workers. After these strikes, a three-day-long ‘Mahapadav’ was held on 9-10-11 November 2017 at New Delhi, right outside the Parliament. This ‘Mahapadav’ was followed by a massive general strike by more than eight million Anganwadi-Asha-Mid Day Meal Workers and other scheme workers on 17 January 2018. They demanded the regularisation and implementation of unanimous recommendations of the 45th Indian Labour Conference to give them ‘Worker’ status and social security.

Many other workers’ agitation of different scale took place in between throughout the country. After the discussion with the Modi regime reached a deadlock, the working class marched to the Parliament along with the farmers on 5 September 2018 as part of the Mazdoor-Kisan Sangharsh Rally, which sent panic waves down the spine of the Modi regime and its corporate ringmasters, resulting into an intensification of communal propaganda by the RSS and its affiliates, especially using the hackneyed rhetoric of Ram Temple construction.

Unmoved by the communal tirade, when two major farmers’ march shook the government and the anti-incumbency wave threw the BJP out of power in three states that it had turned into Hindutva fascist fiefdom at the end of 2018, the Modi regime, instead of retreating, intensified its act of undoing the meagre rights that the working class won for itself through blood-laced countless struggles since the colonial period by amending the labour-related and trade union-related laws.

The BJP, in order to satiate the lust and greed of its corporate masters, isn’t leaving any stone unturned to enact the amendments of the Labour Law and the Trade Union Act, 1926. The amendments will snatch away the right to unionise from the majority of the workers and formation of a trade union absolutely impossible in most of the enterprises. Already, thanks to the neo-liberal economic order and the prescription of the World Bank and the IMF, the Indian state has launched a number of attacks on the working class since the time Rajiv Gandhi’s government signed the GATT.

Through the advent of the Special Economic Zones, building up of Software Technology Parks, export zones, greenfield and brownfield projects, the Indian ruling classes have snatched the right to unite, organise and negotiate from millions of workers and employees of the service sector. Millions of contractual workers are working like slaves for a meagre wage in cities like New Delhi, Noida, Gurgaon, Ahmedabad, Surat, Mumbai, Navi Mumbai, Bengaluru, Chennai, Hyderabad, Kolkata, etc. Millions of service sector employees are still hired without the minimum salary and they live their lives in sheer poverty.

By taking away the right to unite, organise and negotiate, by doing away with the concept of secure jobs, salary/wages, post-retirement benefits, medical costs, etc. the Modi regime is launching a full-scale economic war against the poor and the lower-middle class of India at a time when, according to a report from The Centre for Monitoring Indian Economy, unemployment rate rose to 7.38 per cent in December 2018 from 6.62 per cent in November 2018 and 4.78 per cent in December 2017. It’s the highest unemployment rate in 27 months since September 2016 when it stood at a high of 8.46 per cent.

The excuse of more labour reform would lead to more job creation is a cliche that the advocates of the neo-liberal economy have been peddling since decades. Actually, the labour reform they talk about is an intensification of labour exploitation to enrich a handful of corporations and their leech super-rich shareholders and C-level executives. The jobs are taken away by technology-intensive investments, large-scale layoffs, adoption of a ‘hire and fire’ policy without any repercussion and excessive exploitation of the working class.

To destroy the efforts of the enemies of the working class, to expose and isolate the scabs within the ranks of the working class, to intensify the massive people’s struggle against Hindutva fascism and its pro-corporate policies, it’s important that the overwhelming majority community of the country– the poor and the exploited people –unite and make successful the nationwide two-day-long strike on 8-9 January 2019.

The Modi regime can’t defeat the working class, rather it, along with the entire Hindutva fascist camp and their corporate-feudal masters, will be uprooted from the country by the united alliance of the workers, peasants and the broad masses of toiling people. Their fall and the rise of the poor are both inevitable, this two-day-long strike on 8-9 January 2019 is merely another blow on their mansion of clay. The apocalypse isn’t far away for the Modi regime and its sponsors.