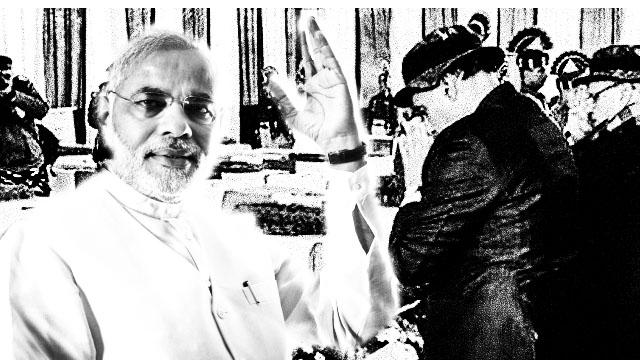 The suicide bomb attack on a CRPF convoy in Pulwama of Kashmir has been a watershed moment for the sinking ship of Prime Minister Narendra Modi and his Hindutva fascist bogey. If history repeats itself first as tragedy and then as a farce, what we’re experiencing as the aftermath of the Pulwama attack is a blend of 1984 and 2002, sprinkled with the water of jingoism and unbridled bigotry to spread xenophobia among the masses and consolidate a vote bank before the Lok Sabha elections.

The dead bodies of the CRPF men were displayed and cremated with a political overtone. Saffron-clad Hindutva hatemonger Sakshi Maharaj was found participating in the funeral procession of one of the CRPF men killed Pulwama. The bigot rabble-rouser was waving at the crowd from the hood of the truck. It was clearly part of the bigger picture of using dead bodies to build-up support for the Modi regime.

Throughout the country, BJP members and supporters joined the funeral processions of the dead CRPF men to politically derive mileage from the optics of such jingoism-charged events. Their leaders continued spitting venom against Kashmiri people on social media, and no one is allowed to ask critical questions over the government’s role and failure behind such an attack in a strongly fortified zone like Kashmir.

Thousands of feral Hindutva fascist mob hired by the RSS and Bajrang Dal have been attacking the Muslim settlements in Jammu. The Jammu city is under curfew anticipating a communal pogrom against Muslims. Cars with Kashmiri numbers are burned down, shops and establishments of the Kashmiri people are attacked by the Hindi-speaking RSS goons in Jammu city.

In BJP-ruled Uttarakhand’s capital Dehradun, a local educational institution where 325 Kashmiri students are enrolled and whose dean was also a Kashmiri, came under attack from a boisterous Hindutva fascist mob. They beat up many students and threatened to set the campus on fire with all its students and staffs unless the dean is sacked, a local Hindu is appointed in his place and the students are thrown out of the institution. It was only after the dean was sacked and the students fled the campus that the Hindutva fascists desisted.

Hundreds of Hindutva thugs tried to gatecrash a girls’ hostel in Dehradun, where a lot of Kashmiri women live, amidst the presence of a large number of policemen who didn’t stop them. The frightened women were sending frantic SOS asking for help but the BJP government, with a motive to instigate chauvinist violence, showed utmost indifference towards their plea. It’s only when the news became a viral one on social media that the government persuaded the mob to leave the hostel.

The Hindutva mobsters also organised violent drives against Kashmiri businesses in Bihar, Kashmiri Muslims settling in other cities and even threatened a Kashmiri cardiologist in Kolkata, who has been living in the city since last two decades. It’s hard for the Kashmiri businesses to operate in Indian cities as they have become soft targets of feral Hindutva fascist mobs.

People questioning the Hindutva fascist regime’s atrocities and massacres in Kashmir are sacked from their jobs. Navjot Singh Sidhu, a Congress minister who used to work in a popular comedy show, was sacked from the show by Sony TV, which is an RSS poodle under its new management. Sidhu was sacked as he questioned the warmongers why they want a war with Pakistan whose people aren’t complicit in the militant attack but merely a handful of Islamist fanatics? His question had no answers, except that it irked far powerful people than himself.

By censoring the media to prevent it from critically reporting the Pulwama attack or question the loopholes in the Modi regime’s narrative, the BJP has kept only one theme for coverage, ie extreme jingoism and hate mongering by its rabble-rousers at each level, which would fan attacks — first on Kashmiris in Jammu and in other parts of India, second on the Muslims at a later stage citing their being the “other” in India.

This pattern was followed by the Congress party soon after the assassination of former prime minister Indira Gandhi in 1984. Thousands of Sikhs and their residences were selectively targeted by a mob of bigoted Congressmen who burned Sikh men, irrespective of their age, alive and raped women before killing them. The blood-for-blood rhetoric by the leadership gave a bolster to those Congress party goons while the patronage of the state machinery, complicity of the police and administration, made the genocide quite an easy job for them.

Soon after a coach full of VHP and RSS supporters returning from Ayodhya after agitating for the establishment of a Ram temple at the spot of the demolished Babri Masjid were charred to death in Godhra station in February 2002, Modi, then the chief minister of Gujarat, didn’t allow their immediate cremation but brought the bodies to Ahmedabad and publicly displayed them throughout the city to spread communal hatred and then the RSS, VHP and Bajrang Dal thugs unleashed a barrage of gruesome violence against the Muslims of Gujarat, killing, raping and displacing thousands of them.

In both cases, the 1984 anti-Sikh pogrom, and the 2002 Gujarat pogrom, the party that instigated the violence won the next election as the emotionally and communally polarised majority community’s vote helped them immensely. This is the grotesque beauty of Indian democracy, where any form of opportunism, violence and genocides can be used to sweep elections and gain an absolute majority.

Cornered due to massive scam allegations like the Rafale Jet scam, cornered due to rising unemployment, aggravating farmers’ distress, worsening condition of the working class, and overall economic crisis that unfolded due to the unapologetic corporate-appeasement drive it undertook in the last five years of its rule, the BJP under Modi will not lose this golden opportunity. The Pulwama attack is its saviour in the times of absolute doom; it will definitely exploit the situation to sell chauvinism vigorously to all susceptible minds, especially the upper-caste Hindu youth to wean them to its fold.

As tv anchors, who are lapdogs of the Modi regime, bay for the blood of an imaginary “traitor”, as gory atrocities by the Indian troops in Kashmir gets unapologetic endorsement and support, as xenophobia and jingoism overtakes rationality and critical thinking, as more and more social media celebrities call for a massive genocide in Kashmir,  it’s obvious that the Hindutva fascists are getting their Reichstag moment in India without much resistance from the opponents.

As violence against the Kashmiri people and against the Muslims is now blistering at an epidemic proportion, it’s time to not stop at talking but to actively resist the Hindutva fascist mobs and protect their victims or those who are vulnerable to such xenophobic violence. Unless the progressive, democratic and anti-fascist forces can lead strong people’s resistance against the Hindutva fascist thugs, it will be difficult to maintain peace and harmony in the society. Reichstag is on fire now and the progressive and democratic forces must not forget what’s going to come on the way and stay prepared to thwart all evil designs of the Modi regime and its fascist lackeys.