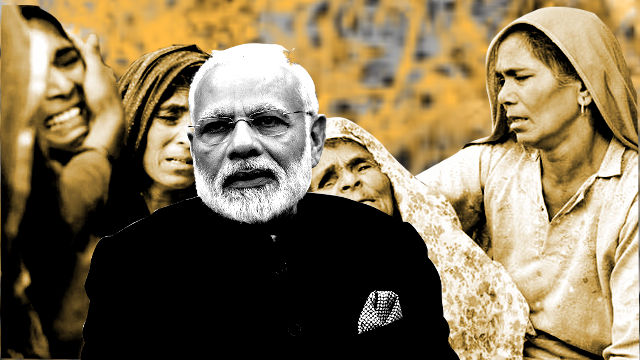 As India reels under the juggernaut of a severe economic crisis, the Modi regime is facing an obstinate challenge from the opposition. The cliched rhetoric used by Prime Minister Narendra Modi to brush aside criticism over his disastrous role in mismanaging the economy has made him a laughing stock for many and he is a principal figure appearing in most of the satirical memes floating on the internet. In such a situation the 2019 Lok Sabha election will not be a smooth ride for the BJP or its ideological parent — the RSS.

They know it and that’s why they are trying to do some damage control at the economic front by dangling the bait of “better days” before the common people by packaging the Union Budget 2019 with measures that are marketed as “farmer-friendly”, “middle class-friendly”, etc. However, these measures are not fully able to deceive the basic masses, the farmers, the working class and the toiling masses.

As a stop-gap measure, the RSS is utilising the Ram Mandir saga, which has become a trite for the Sangh Parivar since the mid-1980s. The communal vitriol, marketing the prime minister as a strong and uncompromising crusader against terrorism, by using films like Uri or the arrests of several high profile academicians and intellectuals, who have been battling on behalf of the underprivileged and marginalised communities, after accusing them as “Urban Naxals” following the template set by flop filmmaker Vivek Agnihotri, etc, boil down together to one frantic attempt of returning to power through the parliamentary path for the last time, before doing away with the parliamentary democratic system itself by 2022.

Whether the BJP will return to power after such a tragic, vitriolic and violence-laden rule is a matter of the future, what one can say from the present scenario is that the BJP’s support is eroding due to the economic crisis and the unemployed youth are discontented with the political rhetoric of both government and the opposition, as neither of them is providing a concrete roadmap regarding employment generation, that too of salary-wages and not schemes about selling pakoras or driving cabs.

Despite its measures to control the anger of the common people by hoodwinking them with the doles like a tax rebate for those with an annual income between Rs 2,50,000 to Rs 500,000, Rs 3,000 pension after the age of 60 to the workers of the unorganised sector and the farmers’ support fund of Rs 6,000 per annum, the chances of the BJP returning to power with Narendra Modi at the helm in case a free and fair election is held is fading every day. If there is one big cause for this issue then it’s the economic mayhem that the Modi regime is accused of executing.

Thus, if the BJP loses the 2019 Lok Sabha election, then the economic mess will be the principal reason behind it, followed by the Rafale Jet scam, which seriously tarnished the “anti-corruption crusader” image manufactured by Narendra Modi.

This is a big problem for the future of India.

It’s a well-known fact that Modi rose to power using severe communal polarisation of the Hindu community. Islamophobia, bigotry and xenophobia have been used freely and unapologetically by the BJP and the RSS-affiliated organisations to elevate Modi to the highest echelon of power.

The economic promises formed a major part of Modi’s blitzkrieg during the 2014 election campaign. However, more than the economy, Modi and his coterie of Hindutva fascist thugs spread Islamophobia and jingoism to instigate religious fanaticism and bigotry among the majority Hindu community. This is their tried and tested method of garnering votes.

During the last five years, India experienced an unprecedented level of communal vitriol targeting the Muslims, mob lynching of Muslims and Dalits with utmost impunity in various parts, attack on Christian churches and community members, several attacks on the tribal people.

These all incidents haunted the nation’s conscience, irking the democratic, progressive, secular and anti-fascist sections of the society.

A large number of people came out on the streets to protest against this mindless violence, this carefully crafted strategy to proselytise a majority of the Hindus — who are politically benighted — by inciting the  Islamophobic virus ingrained in them through years of propaganda.

Yet, despite a large number of protests that tried to assert the essence of secularism and plurality, the resistance against Hindutva fascist forces didn’t reach a higher or advanced level, leaving the Muslims, Christians, Dalits and tribal people in a vulnerable situation.

Despite a series of gruesome mob lynchings targeting Muslims, attacks on Christians, Dalits and tribal people, the BJP managed to sweep the Uttar Pradesh assembly election and became one of the largest vote gainers in Karnataka, Madhya Pradesh and Rajasthan.

This normalisation of hatred, violence and atrocities against the marginalised people is a worrisome problem for the secular and democratic forces to deal with.

Even as the economic crisis has ripened extremely and threatens to dislodge the regime with an anti-incumbency wave, the Modi regime and the RSS are not budging but attempting to divert the people’s attention through the instigation of communal pogroms targeting the Muslim community in politically-volatile Uttar Pradesh.

Under such circumstances, if the BJP is merely booted out of power for its dismal performance in the economic front, for its failures in providing jobs, preventing the fleeing of economic offenders, bringing back black money, or for Modi’s direct involvement in the Rafale Jet scam, then it will be a tragic setback for the secular, democratic and anti-fascist camp.

An economic crisis is, of course, the most hard-hitting thing for the common people, as they have to bear the brunt of it. However, to only defeat the Modi regime for its dismal performance in the economic front or for its involvement in a massive scam like the Rafale Jet scam doesn’t guarantee that the majority of the people are also against the Hindutva fascist agenda of the RSS and the BJP.

When the assembly election results of three BJP-ruled states like Chhattisgarh, Madhya Pradesh and Rajasthan were out, we analysed how this didn’t mean the total uprooting of the Hindutva fascist power, which derives its strength from the feudal production relation.

We showed how the assembly election result in the three BJP-ruled states didn’t wipe out the Hindutva fascist camp, rather kept them as a formidable force to reckon with.

Now if the BJP is merely defeated for the economic catastrophe, while its gross communal misconduct and violation of the Constitution are overlooked, then the crucial problem of Indian politics will not be resolved, though, the opposition may gain electoral leverage vis-a-vis the BJP in the forthcoming 2019 Lok Sabha election.

The fact that most of the middle class are frustrated with the BJP and the Modi regime only due to the economic mayhem unleashed is indeed shameful, as only focusing on the BJP’s economic crimes will legitimise the virulence with which the BJP and the Sangh Parivar have been attacking the minority communities and marginalised people in India.

For a moment, if we assume that the BJP has done an incredible job in the economic sphere and clocked India’s economic growth at a quite high rate, then would it be permissible to endorse the Modi regime and absolve it of its crimes against the Muslims, Christians, Dalits and tribal people?

It’s important that the BJP is not isolatedly fought for its disastrous pro-corporate economic policies, rather, it must be fought for all what it stands for. The Hindutva fascist ideology is a harmful ideology for the idea of India and the equality promised by India’s Constitution.

When all institutions and political parties of the mainstream are supposed to uphold the sanctity of the Constitution, then why would somebody be allowed to evade the responsibility, rather, violate the norms and act against the people in a naked collaboration with foreign powers?

Why would a party not be prosecuted for fuelling, inciting and nurturing communalism? Are the crimes of the BJP merely economic in nature? Can we let go the perpetrators of hate crimes and mob violence so that they can encourage others to join the bandwagon?

If the votes are cast against the Modi regime purely out of its failure in the economic front, then the voters will acknowledge that they would’ve voted for Modi and his divisive, communal and vitriolic policies if the economy was growing faster, jobs were created, and the overall income was higher than ever.

This would definitely mean a serious threat to the concept of secularism and a setback for those who are trying to unite the people against the divisive forces.

The only way out of this perilous situation is to undertake the herculean task of politically educating and awakening the basic masses – the poor workers, peasants and toiled people.

It would also need the political education of the urban middle class to remould and detoxify them by purging the filth of communal hatred that’s filled in them by the Hindutva fascist camp.

Who is going to do this painstaking task of politically equipping the common people and how soon this can be done on a large scale are two factors on which the triumph of secularism and unity against communalism and divisive politics depends upon. The sooner, the better, as time indeed is a luxury that can’t be wasted any more.