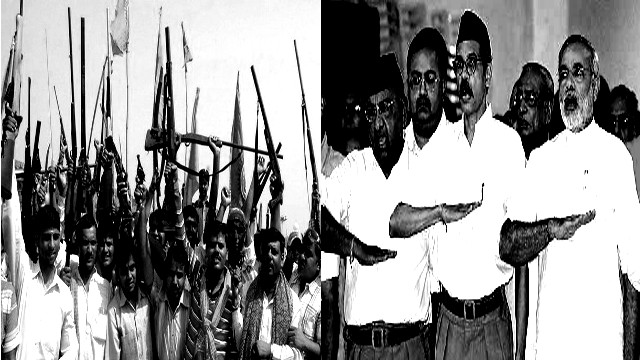 In this special series, we will delve into the historic growth of Indian fascism — the Hindutva fascism — and its ties with global fascist movement with which it shares outlook and organisational ties.

Part II: The international alliance of the Hindutva fascism

Though the British imperialists modelled the RSS following the examples laid by the Brown Shirts (Sturmabteilung) of Adolf Hitler’s Nazi Party, which itself was a replica of the Italian Fascist Benito Mussolini’s Black Shirts (Milizia Volontaria per la Sicurezza Nazionale), they didn’t allow the RSS to arm itself with firearms like the Nazis to prevent any threat to the British colonial rule and also placed the British Indian police force as the role model of Hindu masculinity, which the RSS men were trained to be like. Though Hitler’s Nazi ideology despised Indians {until the Second World War broke, which made Hitler an ardent supporter of Indian freedom (!)} as a race inferior to the superior Aryans, the RSS revered him officially until the beginning of the Second World War and unofficially he’s worshipped in the Sangh’s parochial circles even now. In his 1939 book, We, Our Nationhood Defined, MS Golwalkar, one of the most revered leaders of the Hindutva fascist pantheon, wrote:

“German race pride has now become the topic of the day. To keep up the purity of the race and its culture, Germany shocked the world by her purging the country of the Semitic Races – the Jews … a good lesson for us in Hindustan to learn and profit by.“

We, Our Nationhood Defined, MS Golwalkar, 1939

Following the fascist idea of a strong state based on a uniform culture, language, race, etc, the RSS started propagating the need of a homogenous India with Hindi language, Hindu religious code as the supreme identity of each citizen. While addressing 1,350 cadres in the RSS headquarters in 1940, Golwalkar said:

“The RSS inspired by one flag, one leader and one ideology is lighting the flame of Hindutva in each and every corner of this great land”.

On the occasion of the transfer of power from British imperialists to the Congress and Muslim League, the RSS’s English mouthpiece Organiser published an editorial that said:

“Let us no longer allow ourselves to be influenced by false notions of nationhood. Much of the mental confusion and the present and future troubles can be removed by the ready recognition of the simple fact that in Hindusthan only the Hindus form the nation and the national structure must be built on that safe and solid foundation, the nation itself must be built up of Hindus, on Hindu traditions, culture, ideas and aspirations.”

The British imperialism found great allies in the Italian fascist movement and the German Nazi movement to combat the Bolshevik threat, especially with the post-First World War imperialist economic crisis. Thus, to ensure that the RSS can work as a miniature version of the European fascists and hasten the divide and rule agenda, the British imperialism allowed the RSS to learn from the Italian Fascist movement. In her article, Hindutva’s Foreign Tie-up in the 1930s , Marzia Casolari wrote about the reaching-out programme of the RSS in the 1930s:

“The first Hindu nationalist who came in contact with the fascist regime and its dictator was B.S. Moonje, a politician strictly related to the RSS… Between February and March 1931… Moonje made a tour of Europe, which included a long stop-over in Italy. There he visited some important military schools and educational institutions. The highlight of the visit was the meeting with Mussolini.” (sic)

Drawing parallels between the then British-ally Mussolini’s fascist movement in Italy and the RSS’s fascist practices in India, Moonje wrote in his diary:

“The idea of fascism vividly brings out the conception of unity amongst people…India and particularly Hindu India need some such institution for the military regeneration of the Hindus… Our institution of Rashtriya Swayamsevak Sangh of Nagpur under Dr Hedgewar is of this kind, though quite independently conceived”.

This military regeneration wasn’t for driving out British imperialism, rather to impose the upper-caste Hindu feudal landlords and comprador capitalists at the helm of the colonial state and subjugate the Muslims, Christians, Dalits and tribal people under their hegemonic rule. The agenda of the RSS was to use the political line conceived by the Hindu Mahasabha with modification and vilify the Muslims, Christians and communists. The British imperialist rule was certified as important for the Indian people by the RSS and its ideologues like Golwalkar asked its activists to preserve their energy to fight other enemies rather than the British.

In his work, Bunch of Thoughts, Golwalkar pointed out the Muslims, Christians and the communists as the three enemies of the Hindu Rashtra. Though the RSS has publicly disowned the book repeatedly, it’s still considered as a Bible by its foot soldiers and commanders. Since its inception, the RSS has been fighting that battle, ideologically and physically, against the Muslims, Christians, communists and other progressive forces.

Even after supporting Hitler on ideological lines, both RSS and Hindu Mahasabha didn’t dare to bother the British imperialist rulers when the latter’s contradiction with the Third Reich and the Axis Power turned antagonistic during the Second World War. Though a section of the Congress, from Subhash Chandra Bose to MK Gandhi openly turned to the Axis Power, demanding an ouster of the British rule during the war by miscalculating the dynamics of the war and underestimating the power of Soviet Union, the RSS and Hindu Mahasabha worked closely with the British rulers and even worked as their recruiters. In Bengal, the Hindu Mahasabha even entered into a coalition with the Muslim League to fill the void created by the Congress’s election boycott.

This flexible manoeuvre proved the fluid nature of the Hindutva camp’s ideological loyalty and its strong bond with the dominant imperialist power of the time. Later it helped the RSS to engulf the Hindu Mahasabha when its leader Shyama Prasad Mookerjee founded the Jan Sangh, which later crystallised into the present BJP. Mookerjee remained a member of AK Fazlul Haq-led Muslim League – Hindu Mahasabha coalition government in Bengal during Second World War and even Jawaharlal Nehru’s cabinet until 1950, including the period when his organisation’s Nathuram Godse killed MK Gandhi in January 1948.

Without any hindrance, the RSS helped the Nehru regime to annex the princely state of Jammu & Kashmir by carrying out a large-scale massacre of Muslims in Jammu in connivance with the Dogra Army. More than 100,000 Muslims of Jammu were killed in 1947 by the RSS and the Dogra Army of the dying monarchy. This massacre resulted in a war with Pakistan and the conditional ascension of the former princely state to Indian Union.

The fluidity of its ideology helped the Hindutva fascist camp, earlier led by the Hindu Mahasabha and then by the RSS, to support the concept of Zionism, which claimed the Jews formed a nation — Israel — despite not living in its sovereign territory for centuries. After celebrating genocides of Jews by Nazi Germany, the Hindutva ideologues of both Hindu Mahasabha and the RSS like Golwalkar and Savarkar started displaying their love for Jewish nationalism by supporting the British and US imperialism-sponsored, Zionist fascist movement. In the Zionist ideology, they found similarities with Hindutva philosophy and both organisations supported the forceful occupation of Palestine and its transformation into a terrorist state — Zionist Israel.

Not only the Zionist Israel, under the aegis of the US imperialism-led present world order, the RSS has even strengthened its bonding with the Wahhabi terrorist Saudi Arabian monarchy. The open hobnobbing between the leaders of the two ideologically antagonistic camp shows that they have been serving the geopolitical interests of the US imperialism in their respective regions and the acts of one, emboldens and complements the acts of the other. Under the aegis of the US imperialism, the Hindutva fascists have reached a global stage and have forged a strong alliance with different global fascist forces from Russia, Austria, the UK, the US to Zionist Israel and other countries.

By participating in such a global network of fascist forces in the 20th and 21st century, the RSS-led Hindutva fascism came closer to the white-supremacist movement and became a vocal supporter of the neo-Nazi movement that began in the US and Europe. Even Narendra Modi’s meteoric rise in the 2014 general election, riding an anti-incumbency wave and using anti-establishment rhetoric, was a classic example of how the white-supremacist, the alt-right experiment was implemented in a brown and dark-skinned people’s country like India. It was the opening of the gateway to the rise of several fascist rabble-rousers throughout the world, from the US’s Donald Trump, Philippines’s Rodrigo Duterte, Brazil’s Jair Bolsonaro to the UK’s Nigel Farage and Austria’s Sebastian Kurz and Heinz-Christian Strache. This nexus between the reactionary, pro-corporate and bigot forces around the world has unleashed a new series of violence and discriminatory attacks against the Muslims, immigrants and non-white people.