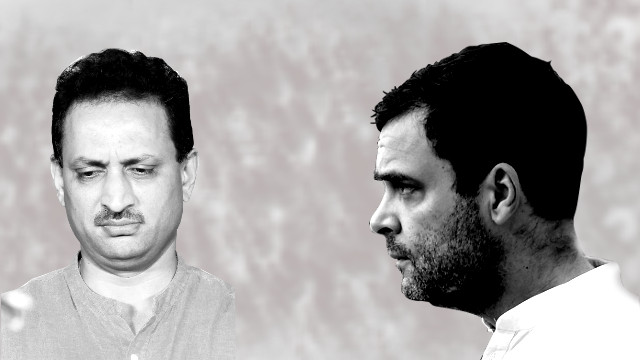 Union Minister and BJP‘s infamous rabble-rouser Anantkumar Hegde is back with his new rhetoric against one of the usual punching bags of the Sangh Parivar — Congress chief Rahul Gandhi. On Monday, 11 March, Hegde reiterated the RSS’s cliched trite on Rahul Gandhi’s family lineage that calls him the son of a Muslim father and a Roman Catholic mother, two religions considered as enemies in the Sangh universe.

“Rahul Gandhi is asking for proof of airstrikes conducted by our soldiers in Pakistan. But, I will ask, what is the proof that he is a Hindu? How did a person born to a Muslim father and Christian mother become a Gandhi? A Brahmin? Will he give DNA proof?”

“When Rajiv Gandhi was assassinated, DNA of his kin was needed to establish his identity. When the sample of Rahul’s DNA was asked Sonia Gandhi refused to give. Instead, she asked to take samples of Priyanka. It’s not a joke. I can show it on records.”

Unlike the Congress’s loyalists, the issue is not here to hold up the Hindu identity of Rahul Gandhi, which anyways won’t satiate the quest of Mr Hegde and his ilk of bigot Hindutva-incensed fascist maniacs, rather it’s to view the questions of Mr Hegde from the Constitutional and democratic angles to find out whether a certain minister can ask a citizen his proof of religion to answer a crucial question asked by him over the performance of a military, which is maintained with the money paid by the citizens through direct and indirect taxes.

Can the BJP and Mr Hegde’s accomplices cite the specific sections of the Constitution that prevents the people from asking questions to the government or demand evidence from it to verify its tall claims? Why does the government publishes, even with extreme tampering and manipulation, data and statistics on economy, socio-economic welfare, foreign trade, import-export or other business it conducts? What is the need to publish data and share it with the people of the country?

The reason a government is bound to provide facts, evidence, correct data and proof of its claims to the common people is that India is still officially a democratic republic despite Mr Hegde’s organisation’s severe desire to change the Constitution and turn India into a tyrannical Brahminical theology-ruled fascist state like Wahhabi Saudi Arabia or Zionist Israel.

Mr Hegde must remember that the BJP didn’t manage to change the Constitution yet, and hence, the armed forces that are operating under the public’s supervision, can’t deny sharing evidence to prove their claims on any issue. The government, as a facilitator and service provider, therefore, must provide the data and information asked for by the common public because it’s the people who own India and not the Ambanis or Adanis whom Modi and his coterie are selling the country in instalments.

Articles 14 and 15 of the Constitution guarantee equality to all citizens and prohibits discrimination in the name of religion, which clearly the BJP and other outfits operating in the RSS’s ecosystem refuse to adhere to. However, as the Constitution isn’t changed and Mr Hegde has taken an oath to uphold the Constitution’s rule, therefore, he must know that Rahul Gandhi isn’t obliged to satisfy anyone’s quest regarding his religious affiliation before asking a question.

Even if a person is born to parents of different religions it’s neither illegal nor does it matters much beyond the filthy mindscape of the Sanghi terrormongers who would seize every opportunity to attack any form of bonding between Hindus and Muslims or Hindus and Christians. They would even start a ruckus when a tv commercial will display bonding between children of two communities!

Though Mr Hegde can(not) show the audacity to challenge the rule of law and give a call to his thugs that: “There should be a fundamental shift in our thinking. We should keenly observe what’s happening around us. Regardless of caste and religion, a hand that touches a Hindu girl should not exist”, however, the Indian Constitution doesn’t bar the Hindu woman to marry a Muslim man or stops a Hindu man from marrying a Muslim woman. It’s for the exact reason India has a Special Marriage Act, 1954, so that the Hindutva fascists or other religious or communal fanatics can’t stop the inter-faith couples from tying nuptial bonds. Mr Hegde can spread vitriol, though not legally, to vilify the Muslims and portray them as “enemies” of the country, he can’t make someone born to an inter-faith couple a less citizen than him and his Brahminical supremacist colleagues.

Mr Hegde has repeatedly shown his dislike for “Muslim invaders” and love for the British invaders through his repeated loathing of Mysore’s braveheart martyr Tipu Sultan. This vitriol is an intrinsic part of the Sangh’s ecosystem, it’s the locomotive of the Hindutva fascist camp and Rahul Gandhi is merely an example cited to vilify the marital bonding between inter-faith couples in India.

The vitriol isn’t fringe; the virulent WhatsApp campaigning used to incite communal hatred and pogroms targeting the Muslims aren’t spontaneous, the leitmotif “love jihad” used by the RSS-led Hindutva organisations to exhort violence against the Muslims isn’t adventurism, rather they are parts of a very well-planned conspiracy that’s hatched to legitimise and mainstream communal violence and mob lynching of Muslims with the state machinery providing patronage to the Hindutva fascist criminals. It’s a prelude to the beginning of an official Hindutva fascist rule under a saffron flag.

Unfortunately, the Congress president will not show courage to counter Mr Hegde by asking him to dare question Modi regime’s minister Maneka Gandhi, who married Rahul Gandhi’s uncle Sanjay Gandhi, and her son-cum-BJP leader Varun Gandhi about their DNA? The grand old party will rather indulge in Brahminical discourse by reiterating Rahul Gandhi’s “gotra” to reinforce his Brahmin identity and thereby try to appease the upper-caste Hindu voters.

This compromise will provide the BJP more ammo; the Congress has been providing ammo to the BJP ever since the late 1970s. The RSS had concocted a tale over Rajiv Gandhi’s Muslim lineage by claiming that Indira Gandhi, the former fascist prime minister, Rajiv and Sanjay Gandhi’s mother and India’s first prime minister Jawaharlal Nehru’s daughter, married a Muslim man named Feroze Khan. They claim that it was Mohandas Gandhi who adopted Feroze and Indira and gave them his surname to save Jawaharlal Nehru’s ignoniminy. This whole perversed story is milled since the late 1990s through bush telegraphs to seduce and captivate the gullible Hindu upper-caste minds.

It’s well-known that Indira Nehru married Feroze Gandhi in 1942. Mr Gandhi wasn’t a Muslim but a Parsi who had changed his surname from Ghandy to Gandhi as a mark of his joining the nationalist movement led by Mohandas Gandhi. Feroze Gandhi made a career in journalism and politics. Sanjay and Rajiv were born to this couple.

Unlike the other Gandhi-Nehru family members, Feroze Gandhi didn’t compromise on principles. He had been a bitter critic of the Nehru regime at times and even exposed the government’s scams through his brave journalistic endeavours. Though he was a Gandhist and liberal-democrat, yet he was a vocal advocate of socialistic ownership of industries and was despised for this by the big comprador and crony capitalists, and their lackeys in the Congress. In terms of nationalism and patriotism, Feroze Gandhi had been far better than the nincompoops of Mr Hegde’s saffron fascist camp, who unapologetically served the interests of the British imperialists throughout the period of anti-colonial struggles.

Though it’s a fact that Rahul Gandhi’s father Rajiv Gandhi and his mother Indira Gandhi were devout Hindus, the Muslim angle is always used to trigger Islamophobia and project the Congress, which has been complicit in the largest number of communal riots and violence during its rule, as a pro-Muslim party. This on one hand, helps the BJP to polarise the hysteric upper-caste Hindu elites and urban middle class, while on the other hand, it helps the Congress to dupe the Muslims by presenting itself as their protector from a feral and pugnacious Hindutva fascist mob.

It’s time for the democratic, progressive and anti-fascist secular powers to assert and establish the Muslim’s equal right in all spheres of life in the Republic of India as enshrined in the Constitution. It’s time to assert that being a Muslim neither creates a different DNA, nor does it makes a human being less human despite what the Sangh’s brainwashed cadres believe. It’s time that the fact be reasserted that Muslims own this country as much as a Hindu or a Sikh or a Jain, and it’s no one’s business to ask them to prove their “lineage” or “loyalty”. Rahul Gandhi or Rahim Ghafoor have the same right to ask questions to the government, seek evidence from it for its tall claims or assertions, and, above all, do all these without being apologetic or showing their DNA report to the ilk of Mr Hegde and the Hindutva fascist hatemongers like him.