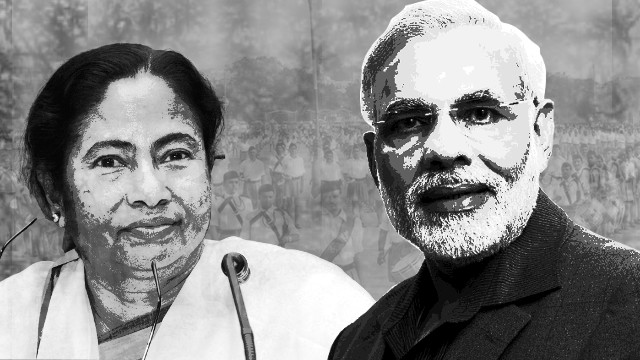 Ram Navami, the north Indian Hindu festival celebrated after the nine-day-long Nav Ratras during the end of spring, was earlier observed by a minuscule Hindi-speaking upper-caste Hindus in West Bengal. For the majority Shakta Hindu community, it had been the time for Basanti Puja, a dowdy version of West Bengal’s famous Durga Puja. However, the situation has changed drastically since the Narendra Modi-led NDA government was formed in 2014. Ram Navami not only assumed a political character, but it also became less spiritual and more of a rallying point for bloodthirsty feral mobsters baying for Muslim blood.

The BJP, using a plethora of RSS’s frontal “religious” organisations, misused the occasion to polarise the Bengali and non-Bengali Hindu voters in West Bengal through muscle flexing and by inciting communal riots throughout the state. Even though the Lok Sabha election is ongoing in seven phases throughout West Bengal at present, the RSS’s frontal organisations are unsurprisingly getting the permission to organise large-scale armed rallies and demonstrations on the occasion of Ram Navami on 14 April 2019. In West Burdwan, East and West Midnapore, Howrah, Hooghly, etc, districts, the Ram Navami committees, controlled by the RSS’s progeny organisations, have already acquired permissions to hold massive rallies between 13 to 15 April 2019, marring the Bengali New Year celebration with Hindi-Hindu-Hindusthan’s cultural aggression.

Using the facade of “social organisation” and “religious organisation”, the RSS, Vishwa Hindu Parishad (VHP), Bajrang Dal, Hindu Samhati, etc, will very easily fiddle with the Election Commission’s (EC) debilitated Model Code of Conduct (MCC) and carry out extreme communal polarisation exercise under the nose of the authorities. The Hindutva fascists know well that in present-day West Bengal no political force holds the power to resist their juggernaut.

Failing to resist the BJP’s West Bengal expedition, funded by the international monopoly capital and the Marwari-Gujarati crony-comprador bourgeoisie lobby, the ruling Trinamool Congress (TMC) and its supremo, Chief Minister Mamata Banerjee, have started replicating the Sangh Parivar’s model by organising its own Ram Navami celebrations since 2017. Yet, it couldn’t deter the RSS, the VHP, Bajrang Dal, and of course, the BJP from inciting communal violence. Facing the unprecedented rise of a rabidly Hindutva-incensed boisterous mob, powered by a gigantic vitriol-marketing mechanism and fake news, the TMC has lost track and is disarrayed.

To save themselves from the ignominy of anti-corruption raids by central agencies and prosecution in the court, the TMC-led government and Banerjee have secretly collaborated with their former ally BJP. Under an unsigned pact, the TMC is gradually allowing the Hindutva fascist organisations to rapidly grow throughout West Bengal with the help of a multitude of frontal organisations, temples, mutts, etc. The TMC’s connivance can be seen in its nonchalant attitude over the violence triggered by the Sangh Parivar during 2017 and 2018 Ram Navami celebration.

No action was taken against the culprits, none of their leaders, including the infamous Asansol MP and Union Minister Babul Supriyo, was arrested and the very criminal Hindutva thugs are allowed to operate during this election period with utmost impunity. While Banerjee’s police and administration will show a ruthless attitude and act swiftly whenever the working class, peasantry or toiling people organise any political movement against the state machinery, often indulging in macabre atrocities in collaboration with TMC’s hoodlums to suppress such movements, the same police and administration will be found acting hesitantly against the BJP or the Hindutva fascist caravan led by the RSS whenever the latter instigates any communal violence.

This collaboration between the two major right-wing forces has divided the state’s political arena between them, marginalising the ailing parliamentary left and the Congress. During the last Panchayat election in 2018, the TMC and the BJP clearly became the two major parties in the state, relegating the ailing parliamentary left block led by the CPI(M) and a rickety Congress to the oblivion. This bipolar political scenario has intensified the communal polarisation drive in the state, targeting the majority Hindu community, as the RSS and the BJP are projecting Banerjee and the TMC as pro-Muslim powers who appease Islamic powers for staying in power, though the situation of the Muslim community in the state is in the same miserable condition as was during the Left Front’s 34-year-long rule.

The horrendous communal pogroms actuated by the RSS, VHP and Bajrang Dal using the Ram Navami celebration chicanery in 2017 and 2018 exhibited unprecedented bestiality that pulverised whatever communal harmony existed in West Bengal since the 1970s. While these Hindutva fascist organisations, led by upper-caste non-Bengali Hindus, have incinerated West Bengal and its people’s lives using their hired thugs, their leadership are unapologetically affording an insouciance over the victory of vitriol, hatred, violence and bloodshed against logic, unity, peace and harmony.

In the 2018 Ram Navami violence, which affected Asansol, Raniganj, Purulia, North 24 Paraganas, not only many Muslims were killed by the Hindutva-incensed thugs brought by the RSS from Bihar, Jharkhand and Uttar Pradesh, but even an IPS officer — Arindam Dutta Chowdhury — became a victim of a bomb attack and lost his right hand in Raniganj. Banerjee’s government didn’t take any action against the culprits and allowed the rabble-rouser BJP MP Supriyo, to carry out instigation and rioting in open.

Now that Modi and the BJP are harping on Hindutva hate mongering, Islamophobia and jingoism to win the Lok Sabha election after failing to deliver on any of the tall promises made during the 2014 Lok Sabha election, it’s evident that the saffron camp will utilise the rift and antagonism between Bengali Hindus, tribals and the Muslim community to improve its poll prospect in West Bengal. Any violence over Ram Navami, which will follow the same pattern like in the past, viz organising armed rallies, taking a route through Muslim-majority areas, use a feral mob to bawl disparaging slogans regarding Muslims, and use insiders to pelt stones at the rally in order to spark violence, will not only help the BJP and the RSS to market its Islamophobic vitriol and toxify the minds of Bengali voters, but also use the occasion to justify its notorious NRC exercise in states like West Bengal. At the end of the day, it will be the Bengali and non-Bengali Muslim minority who have to pay the cost of BJP’s expedition with their own lives and livelihood.

From Asansol to Mecheda, from Durgapur to Kolkata, from Howrah to Kharagpur, anyone can find the massive preparations underway for the Ram Navami’s armed rallies. The preparations and an ominous silence around it will express how obstinate the pugnacious RSS, VHP, Bajrang Dal and other Hindutva fascist foot soldiers are to incite communal violence before the second phase of the Lok Sabha election in West Bengal. The aggrandisement they have got due to the EC’s biased rule is going to help these boisterous and feral mobsters to unleash macabre atrocities and gruesome violence. Rather than taking affirmative actions to resist these Hindutva fascist terrorists, the TMC is busy mobilising its cadre base to organise their own Ram Navami rallies and the parliamentary left is staying aloof after lodging formal complaints with the EC.

In the absence of any organised resistance from the mainstream parliamentary opposition, the progressive, democratic and revolutionary left forces must reach out to the poor Bengali Hindus, Dalits, tribal people and the non-Bengali poor Hindus to expose the Hindutva fascist agenda and the threat it poses to West Bengal. The need of the hour is to unite the poor on a large scale to resist this Hindutva fascist juggernaut with all their power. It’s only the poor who will have to bear the brunt of any riot or pogrom. They will not only suffer economically but will also be vulnerable as the organised mob will target their localities to intensify the violence. Thus, it’s imperative that these people are united and the toxic propaganda that has reached the masses so far is detoxified by intense political education.

Only a politically-educated, united and visionary political alignment of the poor and the oppressed will be able to vanquish the RSS’s aggression and pay back the Sangh Parivar in its own coin. By not wasting a second into deliberations, it’s urgent that the common people are detoxified, politically-awakened and united to fight this Hindutva fascist menace that threatens to burn down the last vestige of harmony in West Bengal by exploiting people’s religious sentiments around Ram Navami, which was never an occasion of violence before the RSS turned it into a political vessel to achieve its goals.