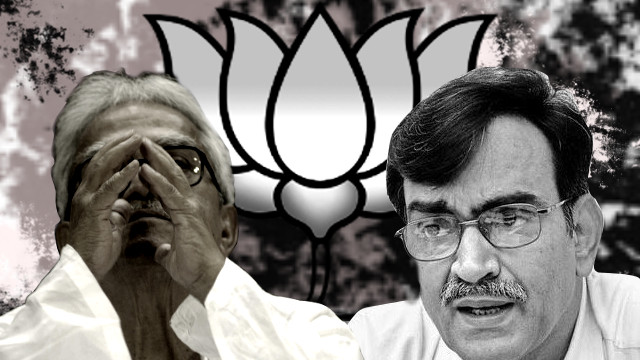 A major brouhaha is created over the erosion in the vote share of the CPI(M)-led parliamentary left block in West Bengal and its transfer to the Bharatiya Janata Party (BJP), which helped the latter win 18 seats, a jump from two seats that it had won in 2014. The CPI(M)-led Left Front, which ruled West Bengal for 34 years, ended up with zero seats, the worst performance of the party in the last five decades.

This sudden swindling of left votes to extreme right proved the prediction of West Bengal Chief Minister Mamata Banerjee correct, when she warned of a larger secret unity between these two parties, who are ironically fighting a war in Kerala where the CPI(M) is ruling but uniting in West Bengal to dislodge Banerjee’s Trinamool Congress’s (TMC) government. The Congress party, which managed to win two seats this election, albeit with the left’s support, is also rendered as a non-factor in West Bengal’s politics.

In the 2014 Lok Sabha election, amid a so-called Modi-wave, the BJP managed to win only two seats from West Bengal — Asansol and Darjeeling — while the party got 18% of total votes, which was a significant 10.90 percentage points rise from 7.1% votes in the 2009 Lok Sabha election. Earlier, in the late 1990s, when Banerjee’s TMC was a constituent of the National Democratic Alliance (NDA), then the BJP managed to get two MPs with TMC’s support and garnered 11.13% votes.

However, in the 2019 Lok Sabha election, the Left Front could secure only 7.46% votes, with the CPI(M) securing 6.28% votes. It clearly showed that the votes of the left have transferred en masse to the BJP as the saffron camp sounded promising in toppling the reign of Banerjee, who is considered a principal threat vis-a-vis the BJP by a majority of CPI(M) leaders and supporters.

This drop in the parliamentary left’s vote share didn’t sound surprising to any political observer who has seen the transformation in the West Bengal politics during the last 10 years when the left’s bastion eroded and it was thrown out of the power first and then even from the opposition bench.

Actually, the Left Front never owned the voters. The mainstream media built the myth about the presence of a large left vote bank in West Bengal. However, the fact is that the Left Front received huge mandates in its favour only because it was the omnipotent ruling block in the state for three decades, and its vote bank was sustained with an omnipresent organisational outreach of the CPI(M). It was a pure “give and take” relationship, where the left used its clout over the administration to lure or intimidate voters to choose it over the opponents.

As the left’s grip over the state started wilting from 2009, the vote bank disintegrated and gradually switched to the TMC, while the anti-TMC section went to the BJP from 2014 onwards. The CPI(M) is now left with a minuscule vote bank, which is most of its activists, supporters and hardcore opponents of the BJP and the TMC, who still harp their hope of defeating fascism on the ailing organisation.

The votes that the BJP is gaining at present, through communal polarisation and by leading the bandwagon of anti-TMC resistance in West Bengal must be known as what it’s — the anti-TMC votes — and, moreover, a large portion of these votes are even not from the hardcore anti-TMC voters, but from those who wanted to have Modi at the centre, even though they are okay with Banerjee’s rule in West Bengal.

In any case, there is no captive left vote bank, and even though the CPI(M) still has an organisational presence in West Bengal, its supporters are voting for the BJP to bring down the TMC regime as they know their leaders will be unable to do it on their own. If we talk about the voters, then they are not a homogenous block but divided along antagonistic class and caste lines, voting for the same party with different expectations. The reason each class or caste votes for a party is always different, and at times, like in the case of Modi, is often contradictory.

An ideologically bankrupt and vacuum CPI(M) is shamelessly trying to revive its organisational presence and parliamentary fortune by using the BJP as a vessel and at the same time, it’s trying to dupe the voters in believing that it will fight against the policies of the Modi regime. Such hypocrisy is even driving away its loyal supporters either to the TMC or to the BJP, as the CPI(M) has no material condition right now to defeat the TMC, and the political careerists, who one enriched themselves waving the faded crimson banner, are now quite comfortable to carry the saffron banner, provided that they get access to the spoils of loot and extortion after seizing power from the TMC.

For the real left, the revolutionary and anti-fascist left, politics is never about developing or nurturing a loyal vote bank but about creating an alternative narrative, arousing the masses with in-depth political education, tempering and uniting the people through class struggle, and defeating the class enemies through a protracted struggle. Real communists are not supposed to struggle merely for parliamentary seats in a bourgeoisie democracy, rather, they are supposed to make struggle within the parliament an appendage of the greater non-parliamentary struggle for political power fought outside.

The CPI(M) and its allies have already vanquished from West Bengal’s arena for the better, as it would provide a greater opportunity to the revolutionary communist forces to fill the vacuum and play a lead role, through a united approach, in defending the people’s interest and in destroying the Hindutva fascist juggernaut. The more fiercely the non-parliamentary, the anti-fascist left can fight against the Hindutva fascists at present, the more are its chances to rewrite history.

If the revolutionary communists start taking affirmative actions in West Bengal to defeat the Hindutva fascism on their own terms, then they will be able to turn the struggle into a binary between saffron and the red, between the rich and the poor, thereby puncturing Modi’s edifice and his hysteric populism. It’s through fierce class struggle, through an uncompromising battle of ideas, driven with the larger goal of seizing power and establishing the reign of the productive classes, the real left can certainly invigorate itself and thwart the menace of Hindutva fascism in West Bengal. The more the revolutionary left will grow, the more the phoney left will disintegrate into the oblivion, cast into the trash of history for their nefarious role.