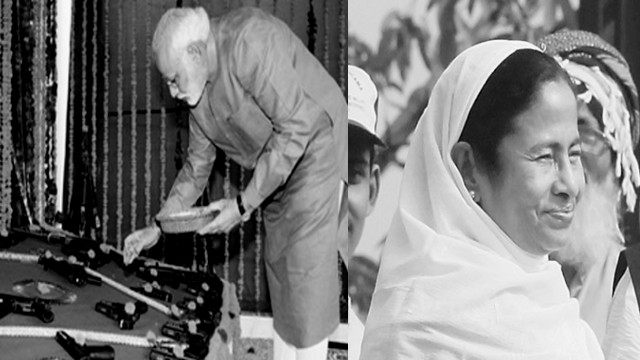 Shortly after the Bharatiya Janata Party (BJP) won 18 seats out of 42 in West Bengal, four less than its target to cross the halfway mark of 22, an erosion in the ruling Trinamool Congress’s (TMC) rank became clearly visible as Members of Legislative Assembly (MLA) and councillors started switching allegiance to the saffron camp. Under BJP leader Mukul Roy, a large-scale poaching exercise is going on to wean away MLAs from the TMC. Roy was the co-founder of the TMC and one of the closest associate of the TMC supremo and West Bengal Chief Minister Mamata Banerjee; he switched to the BJP to save himself from the Saradha and other Chit Fund Scam investigations. Roy inducted his son Subhranshu Roy, a sitting TMC MLA suspended by Banerjee for six years, along with Tusharkanti Bhattacharya, another TMC MLA, and Devendra Roy, an MLA of the ailing CPI(M). These three joined the BJP with 50 councillors and they were followed by Manirul Islam, the notorious TMC MLA from Birbhum.

The BJP, which won merely three seats (its highest tally in any assembly poll in West Bengal) during the 2016 assembly election, now has 11 MLAs in the house after the party swept the assembly by-election in the state along with the Lok Sabha election. There is a lot of cacophony in the corporate-controlled mainstream media over the TMC’s debacle in the Lok Sabha election and Banerjee’s nosediving popularity. The corporate-controlled mainstream media, which once hyped her as the real alternative to the erstwhile Left Front government in West Bengal 10 years ago, has now written her off following the BJP’s spectacular rise in the state from being nobody in 2009 to becoming the omnipotent force without any grassroots organisation in 2019. In the present Lok Sabha election, Banerjee lost more than 143 assembly seats to the BJP, as in those strong turfs of her party, the saffron camp reaped a rich yield by sowing the seeds of communalism, bigotry and by peddling sheer lies.

At present, the big question is not whether Banerjee will secure another term in 2021, which is quite impossible if the current situation prevails, rather, it’s whether the BJP chief Amit Shah and Prime Minister Narendra Modi will allow the TMC to complete its current term until 2021 as a weakened, isolated and brutalised entity or a President’s Rule will be imposed on West Bengal to pave the way for the BJP before anti-incumbency against the Modi 2.0 regime pent up among the common people? Whether the BJP can stay away from power for the next two years and harass the Banerjee government in each step, carry out the usual smear campaigns to malign the chief minister and spread Islamophobia at an industrial scale will be clear in the next few months, as Roy claimed his party will organise seven different press meets to show the careerist and corrupt TMC MLAs switching sides.

Modi and Shah are aware that if they usurp power now by dismissing the TMC government before it loses its majority in the legislative assembly or faces a debacle in the 2021 poll, then such a move may provide fodder to the opposition and allow them to compare Modi 2.0 regime with the Congress’s rule. However, they know that in both Karnataka and West Bengal they will have to do something to break the current impasse and install their own rule. Maximum 40 to 50 MLAs will join the BJP from the TMC, however, it won’t provide them with the majority in the assembly. Hence, the only route to power left is fuelling communal violence targeting Bengali Muslims and anti-TMC violence using the criminals and mercenaries who did a volte-face. A civil war-like situation in West Bengal will give an ample opportunity to the Union government to dismiss the state government under Article 356 of the Constitution by citing law and order breakdown. The allocation of ministries and special status to the Hindutva fascist rabble-rouser MPs from West Bengal is a part of this scheme of fuelling violence in the state.

Through its clever manoeuvres and communal innuendos, the BJP has already poached the majority of the anti-TMC voters from the ailing CPI(M)-led Left Front’s fold. The party has also delivered a major setback to the Congress party in the state. The CPI(M) workers are now recovering their party offices, once usurped by the TMC, with the help of the BJP, while on the other side, a large number of TMC mercenaries have joined and swollen the ranks of the BJP, making it a killer force in several districts of southern and northern Bengal. In the coming days, the BJP will reduce the narrative of West Bengal’s politics into a Hindu-Muslim binary by playing the Sangh’s cliché “Muslim appeasement” card to entice the Bengali and non-Bengali Hindus against Banerjee’s regime. The reduction of the political space into a bipolar system will definitely become a major setback for the working class, the peasantry and the downtrodden people, as their voice will remain unheard and concealed in the political battlespace.

Once the TMC government falls in West Bengal either due to central intervention or due to Banerjee’s drubbing in the 2021 assembly election, there will be an upsurge in violence against the TMC workers, as the mercenaries who have switched to the BJP and the RSS’s apparatus will not allow the TMC to hold any organisational base at the grassroots. When Banerjee rose to power in 2011, the entire mercenary army of the CPI(M) switched allegiance towards her and she used them to decimate the CPI(M)-led Left Front organisationally. The violence paid her rich dividend and she maintained a comfortable lead in almost all local elections. However, with a sign of these mercenaries now switching their allegiance, and the left’s anti-TMC votes shifting to the BJP, it will be mayhem for the TMC when the BJP wins the election.

For now, Banerjee appears frustrated and disarrayed. For Banerjee, it’s a major threat to her political relevancy in West Bengal and India, as she didn’t ever keep an exigency plan because she never anticipated that she can lose power after struggling for more than three decades for it. Now that the tables are turned, she and her party have returned to the stage where the CPI(M)-led ailing Left Front government was in 2009 when the TMC swept the rural Bengal and rendered it weakened and fractured, riding on the huge anti-incumbency waves. History is repeating itself and, ironically, the CPI(M) has forged an alliance with the BJP this time to take on the TMC and become the chief opposition party in a BJP-ruled state. As her fate is sealed, starting from the tiny mice, all prominent TMC leaders, who don’t differ with the BJP much ideologically (they were allies in the late 1990s), are ready to join the saffron bandwagon and transform West Bengal into a hotbed of communal violence. This large scale desertion is manifesting that the loyalty of TMC’s leaders towards Banerjee, which she used to boast on, is as hollow as the TMC’s ideology and principles.

Though the communal polarisation of the upper-caste Hindus, tribal people and the Bengali Dalits (Namasudras) has played a crucial role in building a strong support base for the BJP and a large audience for the Rashtriya Swayamsevak Sangh (RSS) — the fountainhead of Hindutva fascism and the ideological mentor of the BJP — it’s an undeniable fact that the anger of the people against the TMC’s misrule, its extortion rackets, its criminal syndicates and gangs played an important role in helping the BJP grow in the last five years. For the people, an ailing parliamentary left with ebbing organisational presence was no strong alternative to the TMC and thus, the BJP successfully managed to fill the void. It resisted the TMC’s mercenaries with the RSS’s own mercenaries at places and pushed them back, which won it popular support. Even the ailing CPI(M) flocked under the Hindutva banner in most places to save its skin from the TMC’s assault.

Banerjee is now in a complicated crossroads of history. For her, there are three distinct roads to walk upon. Firstly, she can resist Modi with vigour by uniting with even the left and democratic forces, by mobilising the common people at the grassroots, and by using the essence of Bengali nationalism against the Hindutva fascist aggression of Hindi-Hindu-Hindustan. Secondly, she can join the BJP-led NDA and extend her support to the Modi regime for the old time’s sake and become politically irrelevant like Nitish Kumar of Bihar but still hold on to power. Thirdly, she can resign from chief ministership and return to her mass agitator’s role, where she can build a counter-narrative and apologise to the people for her crimes, it may her in regaining some mass support.

Which of these three paths Banerjee will take will not only write her own fate but also impact the future of West Bengal immensely. The erosion in the TMC’s support base as well as in the rank of leadership will eventually end up the off-shoot of the Congress party, which Banerjee founded once to combat the left. Now, to prevent her tragic downfall, her imminent doom, what path Banerjee chooses and how her party workers and leaders stay loyal to her at the time of despair and gloom needs to be seen. Whichever path she may choose now, the history will always remember her as the leader who ignited the prairie fire of communal violence in West Bengal to fracture the people’s unity for her own petty goals; a crime she can’t ever undo by upping her ante against Modi or the BJP.