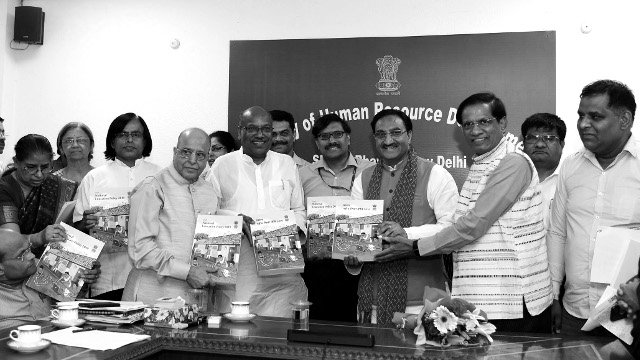 As soon as Narendra Modi-led National Democratic Alliance (NDA) government started its second innings it stoked a major controversy by proposing the imposition of Hindi as a mandatory language to be taught to non-Hindi speaking students. A committee on educational curriculum, headed by former Indian Space Research Organisation’s scientist Dr Krishnaswamy Kasturirangan, submitted its proposal on the New Education Policy to the new Human Resource Development (HRD) Minister Ramesh Pokhriyal and Minister of State for HRD Sanjay Shamrao Dhotre on Friday, 31 May 2019. The 500-page proposal emphasises on changing the present National Education Policy, which was adopted and modified in 1992. Modi’s party — Bharatiya Janata Party (BJP) — promised to implement a New Education Policy in its 2014 election manifesto.

Under the guise of developing the students’ capability to communicate and even do presentations in one of the Indian languages, the draft policy suggests making Hindi a mandatory subject until the eighth standard for students whose native language is not Hindi in schools affiliated with the Central Board of Secondary Education that controls the majority of the English-medium schools. This policy, if passed using the BJP’s brute majority in both houses of the parliament, will become a threat to the independent existence of the non-Hindi people, including the Assamese, Bengali, Bhil, the entire Dravidian people, Garo, Gond, Gorkha, Khasi, Manipuri, Mizo, Naga, Odia, Santhals, etc.

This conspiracy to impose Hindi on the majority of non-Hindi speakers of India, this conspiracy to promote the Sanskritised version of Hindustani to enslave young minds isn’t a new conspiracy. It has a long and bloody history, and its causes are deeply rooted inside the semi-colonial and semi-feudal structure of Indian socio-economic system.

Hindi, derived from Hindustani, and adulterated with Sanskrit, has been the language of the upper-caste Hindu elites of north and west India since the colonial period. As Sanskrit had been a language whose knowledge and usage was monopolised by the upper-caste Brahmins for centuries, they developed the Hindi language as the elite’s language alike Urdu, which was also used by most elites in the colonial era.

When India was partitioned and the power batons of India and Pakistan were handed by the British imperialist rulers to their trusted lackeys like Jawaharlal Nehru and Mohammad Ali Jinnah, the ruling classes of both countries — the big comprador bourgeoisie, the feudal landlords and usurers — started developing two distinct artificial cultures that reflect the sentiments and belief systems of their respective classes.

While Pakistan selected Urdu to represent its newly-founded Islamic nationality, the Indian rulers chose Hindi — the other elitist language — to represent the new Indian state. The motive was to create a homogenous India by forcefully altering the diversity that exists in the country in terms of culture, language, religions, rituals, etc. As India was never a nation-state rather an amalgamation of various nationalities, diverse in characteristics, into one union, who were connected by only one common thread — anti-colonial struggle against British imperialism — therefore, it became imperative for the ruling classes to forcefully convert it into a nation-state like the European countries using the fascistic one language, one religion and one culture campaign. The overwhelming majority of Hindus, including the ostracised Dalits and tribal people who have been included in the count of the greater Hindu community, made religion and religious identity as the building block of the Indian nation-state project.

Following the example set by the Pakistani rulers, the Indian ruling classes also started building an unofficial Brahminical state on the foundations of upper-caste Hindu culture, Hindi language and vegetarian diet since the inception of the new state. Hindi became their weapon to homogenise the Indian nation.

The Congress party has been one of the strongest advocates of the Hindi language and it’s followed by the Rashtriya Swayamsevak Sangh (RSS), the parental body of the BJP, in the mission. The erstwhile Congress government’s attempt to impose Hindi as a national language in 1965 sparked a huge conflagration in the Dravid heartland of Tamil Nadu. More than 70 people lost their lives in the anti-Hindi agitations, which eventually triggered the extinction of the Congress party in Tamil Nadu and elevated the Periyarist and anti-Periyarist Dravidian parties to the driver’s seat until this date.

The recent conspiracy to impose Hindi using the route of New Education Policy has faced severe protests in Tamil Nadu, where not only the Periyarist parties but even the ruling anti-Periyarist and pro-Hindutva All India Anna Dravida Munnetra Kazhagam vehemently opposed the move despite being a partner of the BJP in the NDA. The protests in Tamil Nadu, the Dravidian people’s obstinate resistance against Hindi imposition pushed the BJP into the back foot as the party still lacks any credible organisational presence in the Tamil heartland.

Though the Constitution of India considers English and Hindi as merely official languages of the Indian Union, along with all other languages spoken by 1.3 billion people, the Indian rulers have been building a false notion that Hindi is the national language of India. Under this project of psychological marketing, the Central Government has established the Rajbhasha promotion programme by making the appointment of one Hindi expert in each department and office throughout India a mandatory norm. Though India has no “Raj” ie king, yet using the term shows the importance that Hindi has received in India.

Hoodwinking the people into believing that Hindi is the national language, the Indian rulers have promoted the language through a plethora of cultural colonisation weapons like films, music, literature, television programmes, political speeches, etc. Except for the Dravidian heartland, most of the non-Hindi states and cultures are more or less captivated by the seven-decade-long Hindi aggression. Many people have been affected by this psychological warfare and they’ve started believing that Hindi is indeed the national language of India.

To describe Hindi as a north Indian language is a mistake that’s committed by most anti-Hindi political campaigns. Hindi has done extensive damage to the north Indian languages like Braj Bhasha, Khadi Boli, Marwari, Bhojpuri, Awadhi, Maithili, Haryanvi, etc. Most of these languages are at the verge of extinction as they are no more part of popular culture, films, television shows, etc. The young generations are not taught these languages in schools and thus, except for a fast-shrinking number of speakers, these languages are losing their beauty, distinct identity and their relevance in north India, where they once flourished as the common people’s language. Only a handful of hill languages and Punjabi could retain their independent identity until now in north India.

The version of Hindi that the Indian ruling classes have been promoting through myriad avenues isn’t even the Hindi that the common people speak, rather a Sanskritised version of it, which distinguishes itself as a language of the Brahminical upper-caste Hindus. The kids of the 1980s remember the usage of heavily Sanskritised Hindi in Ramanand Sagar’s television series on Hindu mythologies, Ramayana and Mahabharata, which were telecasted on national television channel Doordarshan and on Sunday mornings to reach the maximum audience. Ramayana was telecasted at a time when the BJP and the RSS were vigorously pursuing the Ram Janmabhoomi movement, raising the slogan “Jai Shri Ram”, which was also popularised by Sagar through the serial.

Strange Sanskritised words, strange way of addressing people, and a vocabulary that had been completely alien to even regular Hindi speakers, were popularised by Sagar, which eventually captivated the minds of the audience and became famous, without any historical or even mythological roots. The BJP has benefitted the most under this programme of promoting the Hindi language as it matches the RSS’s one country, one religion, one language and one leader scheme. Thus, Hindi-Hindu-Hindustan has been a war cry of the RSS’s feral proselytisers who have been running violent campaigns against minority communities, especially the Muslims and the Christians, calling them the “other”.

Now that the Modi regime has started saffronising Indian education with the Kasturirangan Committee’s report on New Education Policy, it will evidently push the Hindi language to fuel violence and to divide the society, the necessity of uniting the oppressed non-Hindi races has become imperative. There is a dire need to build resistance struggles in each state against the imposition of Hindi and the RSS’s Hindutva agenda through the New Education Policy, and also vigorously promote the usage of the native languages of that state against Hindi by making them popular.

This aggression, a cultural sacrilege committed by the BJP, can also give rise to identity-based fascism from a sense of isolation and desperation among non-Hindi masses, who will find themselves at the losing end. The democratic and anti-fascist forces must combat, on one hand, the imposition of Hindi by building resistance struggle to defend the native languages of common people, while on the other hand, they must stop the ruling class’s conspiracy to beget a new form of racial-supremacist fascism, which eventually targets the poor people and the toiling masses, even though it may arise as a movement to defend a non-Hindi language.

The imposition of Hindi through the backdoors, by amending the Constitution, by bringing changes in the education policy as per the convenience of the ruling party will not only push the RSS’s agenda of homogenising the country by altering its diverse character ahead, it will eventually also colonise a larger section of non-Hindi people and wipe away their culture, language, customs and identity, rendering them as second-grade citizens in their homeland.

The RSS’s Hindi aggression scheme worked well in West Bengal, gradually converting Bengali upper-caste Hindus into Hindutva fascist fanatics and turning them into vessels of Hindi domination. Most upper-caste Bengalis, tribal people of West Bengal and its Dalit Namasudra community are now believing that Hindi indeed is India’s national language. Before this virus spreads to the Dravid land and helps the BJP in colonising the Tamil, Telugu, Kannada, Malayali and other people, the democratic and anti-fascist forces must stop the Hindi-Hindu-Hindustan juggernaut of Modi and Modi’s sycophants with all their power. To start with, movements of all sizes and intensity must be built to thwart the New Education Policy and the eulogising of Hindi by the ruling classes.