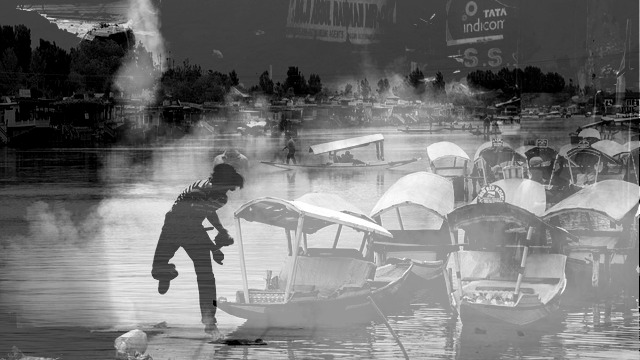 Jammu & Kashmir Bharatiya Janata Party (BJP) spokesperson Anil Gupta said that talks with the Hurriyat Conference and the Joint Resistance Leadership (JRL) will be a retrograde step at this point in time, as the armed forces are at the verge of purging militancy, forever, in the Kashmir valley through their intensified crackdown operations. This view is considered as the official view of the party and the Narendra Modi-led National Democratic Alliance (NDA) government.

Mirwaiz Umar Farooq, a prominent leader of the moderate Hurriyat Conference and the JRL, has been proposing a tripartite meeting between the Kashmiri people, the Indian and the Pakistani regime, who have occupied parts of the valley, to discuss and resolve the long-pending issue, which is also a bone of contention between two nuclear power neighbours.

Gupta, whose party and its paterfamilias — the Rashtriya Swayamsevak Sangh (RSS) — thrives on stoking communal frenzy of the upper-caste Hindu majority by using the bloodshed in the Kashmir valley and glorifies state violence and human rights violations by the military, demanded that the JRL first capitulate to Indian government, give up its demand for a free Kashmir and accept that the territory is an integral part of India, to qualify for the talks with the government. These demands, or pre-conditions set by Gupta, are actually an unofficial declaration of a roadblock for any scope of peaceful settlement of the Kashmir issue through meaningful dialogue between the three major stakeholders.

Why the BJP is opposing the route of a tripartite-negotiation over the Kashmir issue? Why Gupta is imposing pre-conditions that will never let the idea of a talk materialise? Why the BJP, whose former leader Atal Bihari Vajpayee once opened a slightly peaceful window of negotiation with the Kashmiris, is blindly opposing any move towards negotiation even when a large section of the civil society, rights groups and democratic forces are demanding for the same to resolve the long-pending and the bloodiest issue of the nuclear-powered subcontinent?

The underlying reasons behind the BJP’s opposition to any talks with “separatists” or Pakistan over the Kashmir issue can be found in the recently-concluded Lok Sabha elections. The BJP-led NDA won a thumping majority by playing the Islamophobic and jingoistic card. Kashmir became their favourite punching bag to spread xenophobia and incite Hindu chauvinism. In the last four years, the BJP ruled Kashmir as a coalition partner of People’s Democratic Party, its ideological bete noire but opportunist ally, and since June 2018, it’s ruling the state single-handedly through Satya Pal Malik, the puppet governor.

Since usurping power, the Modi regime and the BJP have escalated tension in Kashmir by intensifying military atrocities on the common people, especially since 2016, when protests erupted after the killing of a popular young militant leader — Burhan Wani — who had a cult following. The repression, especially the indiscriminate killing and maiming of protesters by the military pushed numerous youth the fold of militancy and curtailed the thin scope of any negotiation between all stakeholders for a peaceful solution of the Kashmir issue. The more Kashmiri people protested against Indian brutal oppression, the more was their vilification by the RSS and the BJP throughout India. A xenophobic and jingoistic fervour was created over Kashmir and supporting the military repression became a hallmark of new age patriotism that the RSS advocated.

When a militant attack on a heavily armed paramilitary juggernaut in southern Kashmir’s Pulwama on 14 February 2019 killed 42 personnel, Modi and the BJP got a powerful weapon to consolidate its utmost Islamophobic and Hindutva-incensed upper-caste Hindu elite and middle class voters before the Lok Sabha election. Following the template of 2002 Godhara massacre, Modi and the BJP created a chauvinistic temperament and incited the Hindutva fascist thugs to attack Kashmiri people residing in different parts of India. They were thrashed, brutally assaulted and driven away from their educational institutions, jobs and even rented accommodations for their identity as Kashmiris. Yet, Modi and his sycophants talk about integrating Kashmiris into an India where the majority community despises them but only seek their land.

Once the Islamophobic rage against the Kashmiri people became epidemic, Modi launched his so-called “Surgical Strike 2.0” purportedly targeting a terrorist training camp in Pakistan’s Balakote, a claim rejected by the international media but hyped by Modi’s toady Hindutva fascist media. This narrative set the tonality for the 2019 Lok Sabha election. Camouflaging a gargantuan economic crisis, mounting farm debts, severe agricultural crisis and an abysmal fall in employment generation, Modi and his coterie played the Kashmir and Balakot card to sweep the election by polarising the majority Hindu community, including the ostracised Dalits and the lower caste Hindus under the banner of Hindutva fascism.

Today, even though the government has a majority in the parliament and there is a request from the JRL for a talk, the Modi regime, in order to fulfil the long-term mission of the RSS — to withdraw the special yet minimal autonomous powers enjoyed by Jammu & Kashmir under Article 370 of the Constitution and the Article 35A that prevents outsider settlements in the state — is deliberately stoking a severe violent crisis in the region. Through violence and by taking anti-Kashmir legal steps, the Modi regime would try to bring a tectonic shift in the demography of Kashmir by pushing upper-caste Hindu settlers into Kashmir and thereby gradually outnumber the local Muslims to turn the tide in favour of New Delhi. Any talks with the JRL would become a barrier for the implementation of such a heinous scheme.

For now, the BJP has the strongest base in the Hindu-majority Jammu, where the RSS conducted a massacre of more than 100,000 local tribal Muslims to pave way for Hindu settlers and refugees after India’s partition, though Kashmir was an independent princely state then. The BJP leaders and the big comprador capitalists are keen to open the floodgates of real estate development and land deals in Jammu & Kashmir. They know that the Article 35A, prevalence of Ranjit Penal Code and the domination of the Article 370 are roadblocks on their way and therefore, by using jingoistic rhetoric over Kashmir, they are trying to pave their way to enrichment through the unapologetic exploitation of local labour and plundering of resources.

If the BJP or the likes of Gupta and other stooges of Modi think that by sinking the Kashmiri resistance struggle in a pool of blood using brute force they will annihilate a three-decade-old militancy and a seven-decade-old people’s struggle for emancipation, then they are living in a fool’s paradise. Even after deploying a large number of troops for counter-insurgency operations, New Delhi couldn’t win the uneven battle in more than three decades. The average Kashmiri soul couldn’t be subjugated. The common people’s anger against Indian rule has increased manifold and they expressed dismal for the lollipops dangled before their eyes. Their disapproval of New Delhi and anything remotely Indian can be seen in their disdain for the mock elections organised by the state to issue self-attested certificates of democracy. The system has lost its legitimacy to such an extent that even after a year of President’s Rule, elections in Jammu & Kashmir are not held.

In a civilised and democratic society, a dialogue is always a way forward to address people’s resentment and to allow democracy to thrive. The audacity of the Modi regime and the BJP stems from their recent election victory, their ability to manipulate the majority community’s opinion on Kashmir and their ruthless approach towards the Kashmiri people’s cause. Such an audacity by the government and the ruling party is a hindrance to any real resolution of the Kashmir issue.

By denying the opportunity to a free, fair and equal dialogue to the Kashmiri people, the Modi regime and the BJP are trying to keep the bloodbath on in the valley to feed jingoism to their core voter base. In such a situation, the democratic, progressive and anti-occupation forces of Kashmir must resolutely mobilise the people and carry out a massive movement. Only a massive people’s movement, in the face of extreme brutality of the military occupation, will create an international pressure on the Modi regime to sit and negotiate the Kashmir issue with all stakeholders without imposing any pre-condition. Unless the people’s movement for liberty, democracy and freedom is mobilised by the vanguard forces of the Kashmiri society, it won’t be possible to have New Delhi consider the Kashmiris worth a dialogue.