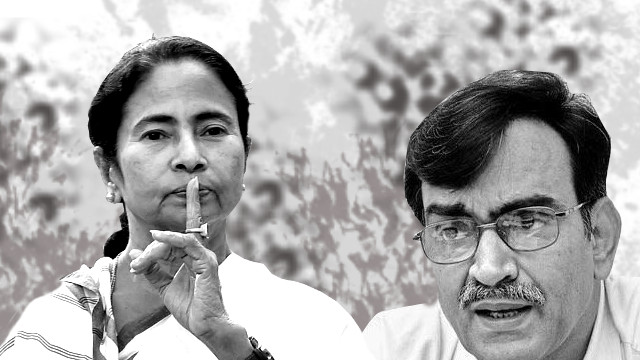 West Bengal Chief Minister Mamata Banerjee surprisingly appealed for unity against the Hindutva fascist juggernaut of the Bharatiya Janata Party (BJP) and called upon her arch-rival Communist Party of India (Marxist) and her alma-mater Congress party to join her in resisting the saffron aggression. Though both of these parties have outrightly rejected Banerjee’s proposal, it’s noteworthy that keeping aside her quintessential hubris, the Trinamool Congress (TMC) supremo did walk an extra mile to propose unity with her arch-rivals. The political optics of Banerjee’s gesture is quite unique, which even stunned a lot of political observers who have been accustomed to seeing Banerjee in a different confrontationist and arrogant avatar altogether.

Banerjee’s call for united resistance against the BJP comes at a time when Prime Minister Narendra Modi has returned to power by winning a landslide majority in the Lok Sabha election riding on Islamophobic jingoistic waves. In West Bengal, the TMC suffered its worst setback in the post-2009 period; the party only won 22 seats out of 42, while the BJP increased its tally to 18 seats from two in 2014.

Even in the 2018 Panchayat elections, the BJP managed to win a large number of Panchayats despite a reign of terror unleashed by the TMC. The erosion of the Congress party’s and the parliamentary left’s anti-TMC and Hindu vote bank is actually working as a catalyst behind the rise of the BJP. With the help of the Rashtriya Swayamsevak Sangh (RSS), the ideological fountainhead of the Hindutva fascist camp, the BJP is building a strong network and penetrating deep into the hinterland of West Bengal using xenophobia and vitriol as strategic weapons. The Bengali, tribal, and Dalit communities (Namasudras) are communally polarised through incessant radicalisation, and the scope of a reversal seems so bleak due to an absence of a formidable force that can consciously shoulder the task.

Under such circumstances, Banerjee is quagmired in a deep crisis. On one hand, her attempt to polarise the Muslim votes backfired with the erosion in her Hindu support base, while on the other, the soft-Hindutva line that she adopted to counter the BJP’s aggressive Hindutva fascist outreach programmes and to wean away the non-Bengali Hindus, especially Hindi, Marwari and Gujarati-speaking voters from the fold of the saffron camp, actually benefitted the BJP immensely, as it was able to show that Banerjee’s pro-Hindu gestures are caused by the saffron camp’s incessant movements against what’s called her unapologetic “Muslim appeasement”. Though it was she who once helped the BJP spread and gain strength in the state during the left’s rule, the poisonous snake is all up to bite her today.

The BJP has grown exponentially by spending more than Rs 35 billion a year to wean away hooligans and mercenaries from the TMC. Mukul Roy, a co-founder of the TMC and a former aide of Banerjee, has played a key role in engineering a series of defections from the TMC. A lot of TMC MLAs, councillors and leaders are joining the BJP and they’re carrying their goons along with them to the saffron camp. This switching of such allegiance is fuelling more trouble as TMC and BJP hooligans are colliding with each other throughout the state. The feral mob of RSS’s heavily armed troops are assaulting the bastion of Banerjee, which is now standing on a weakened foundation and facing an incessant erosion in its support base.

Her empire and her position are under threat today, and like a desperate despot making frantic attempts to survive a catastrophe, Banerjee is seeking help from almost anyone near her, and due to their ideological standpoint against the BJP, the CPI(M) and the Congress are natural choices for her. Her gesture of friendship is also a ploy to expose the fact that both CPI(M) and the Congress are complicit in the BJP’s rise in West Bengal as their lowest-rung activists are aiding the BJP to become a formidable force for the TMC to reckon with.

The CPI(M)-BJP collaboration was left threadbare during the recent Lok Sabha election as the so-called captive left votes swung to the BJP en masse. Though the ailing CPI(M) leadership tried to downplay the unholy alliance, calling it isolated and handiwork of a few local leaders, actually such a tectonic shift in the CPI(M) cadres’ functioning happened either because they fell prey to the Hindutva fascist propaganda or due to their extreme hatred for the TMC, which threw them off from the pedestal of absolute power in the state where they were perched for three decades. Either can’t happen without the knowledge of the top rung of CPI(M) leaders. Actually, the CPI(M) could never accept the reality that it’s deposed and thumbed down by the people of West Bengal whom it treated as serfs for decades. Thus, the party, driven by an urge to return to power is willing to support the BJP if it promises the ouster of Banerjee.

Why the CPI(M) and the Congress party, who have been rendered fast-waning signboards in the state by the rise of the BJP, are declining Banerjee’s offer to fight against the BJP? This question can be answered simply by analysing the complicated condition of these two parties.

Such acts of treachery by Banerjee pushed the Congress to an existential crisis and the party took the route of confrontation with the TMC in those places where it has strong organisational roots to save itself from extinction. The poaching exercise by the TMC, its intimidation and persecution of Congress workers, forced the party to officially forge an alliance with the CPI(M) during the 2016 assembly election and take on Banerjee’s TMC. Though the alliance lost, yet, the Congress became a major benefactor of the deal as the CPI(M)-led Left Front’s votes transferred to its account, yet the vice versa didn’t take place in such a massive scale. After a long time, the Congress party became the chief opposition party in West Bengal, relegating the CPI(M) to the third place.

However, even after winning the 2016 assembly election, the TMC continued poaching several important Congress leaders, including Manas Bhuinya, to weaken the party. West Bengal Congress chief Somen Mitra and his colleague, Adhir Ranjan Chowdhury — the Congress Member of Parliament from Baharampur and the leader of the party in the Lok Sabha — are accustomed to Banerjee’s sugar-coated bullets, and it’s normal that they will exhibit utmost caution in dealing with the TMC at the state-level, while taking a tactical support from the party in the national arena.

For the parliamentary left, especially the CPI(M), it’s a strict no-no to even think about any tactical understanding with the TMC to counter the BJP in New Delhi, leave alone West Bengal. Though the party will defend its unofficial support to the BJP in plucking the thorn called TMC, which it considers the principal threat in the state, it won’t take the TMC along to fight the BJP, as in that case it will lose even the leftover vote bank, somewhere around 6% that it still holds in the state, to the BJP.

CPI(M) leaders and that of other constituents of the Left Front know that their parties are existing only because of the support of a fraction of the state’s anti-TMC voters and to ally with the party that threw them from the highest seat of power to the trash of history will become the final nail hammered on their coffin. To save their existence, the Left Front constituents, especially the CPI(M), have to chant anti-TMC hymn in West Bengal and even ally with the BJP wherever the situation will demand so, even though the CPI(M) may be fighting the BJP in states like Kerala and Tripura, where the saffron camp has unleashed a reign of terror to annihilate the left supporters.

Even if the Congress would still not hesitate to join Banerjee’s efforts in the national arena, for the CPI(M), the BJP is a better bait than the TMC. General Secretary Sitaram Yechury even didn’t mind participating in an all-party meet called by the prime minister when the entire opposition boycotted the same. The CPI(M) looks up to Home Minister Amit Shah, also the outgoing BJP President, to depose Banerjee’s government through President’s rule before the 2021 election. It’s expecting the BJP to become the ruling party of the state so that, by seizing the opportunity of the TMC’s weakening, it can grasp the position of the principal opposition party and utilise the situation to return to power.

In such a complex web of political equations and calculations, it’s unlikely that a greater united resistance against the Hindutva fascist juggernaut can be built by the mainstream parliamentary parties of different shades. The TMC, the CPI(M) and the Congress can’t unite under a common banner in West Bengal, though they can have criss-cross relations and tactical understanding in the parliament.

This disunity, this parochial view of the parties, and the focus on grasping the state’s power seat at any cost rather than uprooting the factors that are promoting the unbridled growth and expansion of the Hindutva fascist BJP and the RSS in West Bengal, are unlocking the gates of a greater crisis that will push the state’s poor people to an abysmal crisis.

Therefore, to save West Bengal and its people from the BJP’s evil designs and fratricide, it’s essential that the anti-fascist and democratic forces, struggling for equality, secularism, democracy, justice and emancipation of the people, come forward and build up mass mobilisation campaigns through political education, efforts of uniting the masses, and arousing them to fight against Hindutva fascism and its all manifestations, including the aggression of the RSS’s Hindi-Hindu-Hindustan cavalcade, which is keen to change the demography of the state and annex it into the Hindi heartland.

Parties like the CPI(M), the Congress or the TMC can of course delay or overlook the ardent task of uprooting the core causes of Hindutva fascism — semi-feudal production relationship, foreign monopoly-finance capital’s dominance and the comprador capitalist structure that funds the RSS-led Sangh Parivar — the democratic, progressive and anti-fascist forces can’t have that luxury, as with each passing moment, the death knell of West Bengal is ringing more loudly than ever.