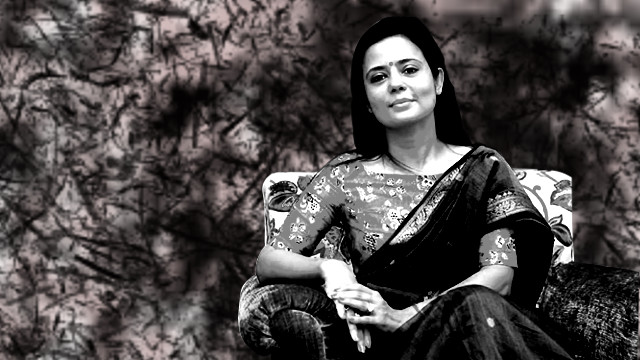 When first-time Trinamool Congress (TMC) MP Mahua Moitra tore into the halo of invincibility erected around Prime Minister Narendra Modi and his Bharatiya Janata Party (BJP) with a fiery speech on the Motion of Thanks in the Lok Sabha, she won a special berth for herself in the liberal-democrat camp, which has been in a tattered and quite dismayed state since Modi returned to power riding on a landslide victory in the 2019 general election.

Moitra, who earlier came to limelight either for her suave, erudite and glamorous appeal, or for controversies like hitting back at Hindutva hate monger television anchor Arnab Goswami, filled the very vacuum of a powerful opposition orator in the Lok Sabha, and became a country-wide sensation for her impeccable English, undeterred and undaunted offensive in the face of heckling and a boisterous mob of BJP MPs trying to underpin the Modi regime and the Hindutva fascist enterprise run by the Rashtriya Swayamsevak Sangh (RSS), the ideological fountainhead of the saffron camp.

She remained firm, she remained focused and unleashed a barrage of incessant verbal punches to knock out the treasury bench in the first round itself. This courageous show, this uncontrolled rage against the criminal enterprise of the government, and against the attempt by the BJP to change the Constitution to snatch away the rights of the common people, is definitely worth applause as not many would dare to call a spade – a spade – in the current scenario.

Though Moitra is criticised by the BJP and the parliamentary left led by the CPI(M), for her silence on West Bengal Chief Minister Mamata Banerjee’s tyrannical rule in the state, where the TMC has unleashed a reign of terror on the opposition and lumpenisation of politics has been legitimised, she has actually hit the bull’s eye by calling out the Modi regime’s hypocrisy and anti-people fascist character. It’s a positive aspect of her debut speech.

However, unlike the overzealous liberal democrats, who were depressed and disarrayed until a few days back after watching Modi’s cavalcade returning to power riding on a jingoistic wave, there’s no reason to cheer and hail Moitra as a revolutionary, path-breaker or an anti-fascist for that matter. It’s not her erudite presentation, her flawless English or her incessant barrage of rhetoric against the Modi regime that would extol her to the pedal of an anti-fascist crusader. A critical analysis of Moitra’s speech will eventually expose its hollowness and show that it didn’t do any justice to the larger anti-fascist struggle waged by the people of the country.

Moitra comes from a right-wing political party that has not much difference with the BJP in terms of economic policies and even had been its partner in the late 1990s to mid-2000s. This is a reason why she didn’t mention the core cause of fascism while accusing the Modi regime. Moitra, or for that matter her ilk of parliamentary politicians, won’t utter a word against capitalism, the very economic system that promotes fascism as a last resort to save its rule during the hour of sheer crisis. Moitra or any parliamentary, mainstream political leader will not show how the foreign monopoly-finance capital, which rules Indian market through its crony-comprador lackeys, have got their grip tightened on all aspects of governance, right from a Panchayat to the Union level. They won’t say that Hindutva fascism is nothing else but a political system that is trying to help the Indian comprador capitalists, the big foreign monopoly-finance capital and feudal landlords to surmount a severe economic crisis by neutralising the chances of people’s rebellion against exploitation, oppression and discrimination.

Modi’s rise to power, the rise of the fascists across the world, from Donald Trump to Recep Tayyip Erdoğan, from Boris Johnson to Marine Le-pen, from Jair Bolsonaro to Scott Morrison, are not isolated incidents; rather, they are connected with the severe crisis that international monopoly-finance capital is undergoing since the economic meltdown that began in 2008 with the subprime crisis in the US.

The crisis kept deepening all these years and the much-hyped invincibility of “globalisation” started falling abysmally. As governments plunged to save big corporate houses by bailing them out using money from public exchequer, the antagonism between the discontented people and the governments that serve the interests of the monopoly-finance capital grew stronger each day. The resentment of the people against cuts in social-security, austerity and unemployment reached a new height and turned into a massive political crisis for the big banks and big corporations that rule the world.

The crisis ripened so much that it needed a major global rescue operation and that can only take place when the governments take off their “liberal democratic” mask and expose the grotesque fascist face to ensure that more resources, especially the assets created by public wealth, are handed over to the corporate houses, almost free of cost, so that they can profiteer by exploiting such assets. Fascism also divides the people on the basis of race, identity, religion, nationality, etc, and it promotes jingoism and chauvinism, making them epidemic to wean away a large support base from logic and reasoning. Moitra overlooked, but the BJP has divided the people into communal lines with the help of the RSS only to ensure that the corporate loot and plunder in India, their aggression against the tribal heartland, their occupation of India’s mineral resources, water, forests, etc, aren’t resisted by the poor of the country. That’s a reason compelling a purely Brahminical RSS to approach and poach the ostracised Dalits and tribal people into their fold and turn them into foot soldiers against the Muslims.

Racism, religious bigotry, anti-liberal rantings, phoney anti-establishment aura are used to hoodwink and captivate the downtrodden people’s attention. An “other” is created, who is blamed for all the woes of people or society. While in India, it’s the Muslims, who are blamed by the RSS and the BJP of conspiring against the Hindus, who are 82% of the population, in the US and Europe, fascism has a racial supremacist ideology embedded in it. The wide array of fascists have distinct characters, policies and agenda, yet, they’re tied together in their economic policies that help the big corporations, or one section of the corporations, to profiteer at an exorbitant rate. The fascists all over the world are trying to shield the monopoly-finance capital-owned order by fragmenting the people into narrow identical blocks, to disunite and weaken their resistance struggle.

For someone like Moitra, who was an investment banker with an institution like JP Morgan before becoming a politician, it’s imperative to overlook the core reason of fascism, while attacking it no-holds-barred. Her skipping of the part of how capitalism promotes fascism and how the fascist forces help the crisis-ridden monopoly-finance capital to survive tough times proves that she, even after understanding the intrinsic relationship, isn’t feeling okay to expose it. As the parliamentary compulsions will never allow even the opportunist left to attack the ruling classes directly, then to expect a revolutionary approach from Moitra will be quite an infantile wish.

Our liberals may go ga-ga over the ilk of Shashi Tharoor or Moitra for their impeccable English and oratory skills, however, for the broad masses of workers, peasants, toiled people, etc, among whom both Modi and the RSS-led Hindutva fascist camp have made deep inroads to incite them with communal vitriol and to disunite them, the appeal of such highbrows is absolutely minimal. For India needs mass educators, mass agitators, mass organisers and mass mobilisers to rally the majority classes — the working class, the peasantry and the toiled people — against the real enemies of India and their servile agents like the BJP and the Modi regime. In this battleground of class struggle, on whose side would Moitra and her kind stick to?

To combat fascism, it’s imperative to fight its root cause, its source of existence, which is undeniably the monopoly-finance capital-controlled world economic order that’s now establishing fascist regimes in almost all countries of the world. By sparing the imperialist order, sparing the tight grip of foreign monopoly-finance capital and their comprador Indian allies on the economy, to merely attack the vessel of fascism serving the cause of the masters isn’t going to bring any real transformation. For Moitra to show her genuine care for democracy, equality, secularism and freedom, it’s imperative to participate in and mobilise the overwhelming masses of workers, peasants, youth and marginalised communities to fight against the real enemies of India — feudalism, comprador capitalism and foreign imperialism — that are feeding the Hindutva fascist order. Until she does that, unless she sheds her erudite and sophisticated image to integrate with the masses, all such tall talks and sharp jibes will go down the annals of history as a manifestation of sheer hypocrisy by the privileged section of the Indian society.