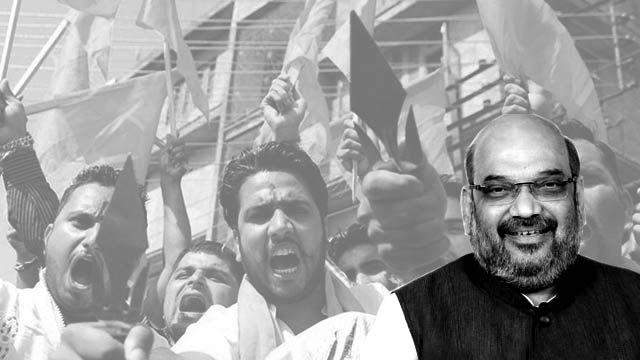 Recently, Amit Shah, the outgoing Bharatiya Janata Party (BJP) president and the Union home minister, has become a major celebrity in the Hindutva fascist Sangh Parivar’s ecosystem. Following the abrogation of Article 370 of the Constitution and reorganisation of Jammu & Kashmir through bifurcation, which meant formal military occupation of the disputed territory by India, Shah has won a position in the party and the entire Sangh Parivar which so far only Prime Minister Narendra Modi enjoyed. Although the Rashtriya Swayamsevak Sangh (RSS) — the fountainhead of Hindutva fascism — doesn’t approve cult of personality to develop within the organisation, it gave leeway to Modi as he sounded promising in fulfilling the Sangh’s long-term obnoxious agendas through an equal mix of Hindutva hate-mongering and state repression. Now, the RSS is going against its stated principles, once more, to have Shah, the arm twister, elevated to the highest level after Modi in the Hindutva fascist pantheon.

Shah is hailed as a “Chanakya”, an ancient Indian political philosopher and royal advisor who played a crucial role in the expansionism of the Maurya Empire. He has been instrumental in spreading the BJP’s empire from the north to the south through manoeuvres, horse-trading, blackmailing and what not. Under the leadership of Shah, the BJP has become what even the Congress party couldn’t become during the emergency.  Shah’s political journey started after he joined the RSS as an organiser. He took part in the notorious Ram Mandir Andolan of the Vishwa Hindu Parishad and played a crucial role in the demolition of the Babri Masjid by sending scores of Kar Sewaks (RSS thugs) to Ayodhya. Though he became a member of the Gujarat legislative assembly in the mid-1990s, it was only after Modi became the chief minister of Gujarat in 2001 and got elected with a thumping majority following the 2002 Gujarat pogrom that Shah’s fortune saw a meteoric rise.

He was hand-picked by Modi to become the home minister of Gujarat soon after Haren Pandya, who held the position and was critical of Modi, was found murdered under mysterious circumstances. Under Shah’s captaincy, the Gujarat home ministry became the official vessel of Hindutva fascism — cracking the whip on the Muslims — and it started a reign of fake encounters, which killed random Muslims after blaming them of being terrorists sent by Pakistan to kill Modi. This helped the BJP to fan xenophobia among its upper-caste Hindu support base on one hand, and on the other, it helped the government to implement tougher anti-Muslim policies to persecute any Muslim voice critical of Modi or Hindutva fascism. Shah was arrested for his involvement in the cases of fake encounters by the CBI and was banished from Gujarat until 2014. He was later acquitted of all charges after the BJP came to power in 2014. BL Loya, the judge who was hearing his case, died under mysterious circumstances and the new judge gave him a clean chit.

It’s an urban legend now that criticising Shah or becoming a threat to his career will certainly expedite one’s death or imprisonment in Modi-fied India. Morning walks are specialities of Shah and thus has become an integral part of innuendos around him. Shah’s role in helping the BJP and the RSS grow throughout India and even rule the Christian and tribal-majority states of the northeast by stitching unusual opportunistic alliances, horse-trading of members of parliament (MP) and members of legislative assemblies (MLA) are case studies for those who vouch for the Indian model of democracy. Shah categorically proved that democracy has a price and any MP or MLA can be coaxed to either join the BJP or support it by employing a plethora of tactics. As the BJP has become the largest and the richest party in India under Shah’s leadership, it’s a child’s play for him to lure any promising politicians from other parties into the BJP using monetary baits.

Shah proved his credibility in Goa, where the BJP was booted out of power, by stitching an alliance with its opponent Goa Forward Party and forming a government bypassing the Congress party. He kicked out the Goa Forward Party MLAs from the alliance as soon as 75% of Goa’s Congress party MLAs joined the BJP in a sudden move. Similarly, in Karnataka, though the Congress party managed to form a government by joining hands with the Janata Dal (Secular), it couldn’t prevent its fall as BS Yeddiyurappa, the Shah of the south, toppled the government by poaching Congress and JD(S) MLAs spending billions, thanks to Shah’s guidance and assistance.

In West Bengal, though the BJP won only three seats in the legislative assembly, by coaxing the ruling Trinamool Congress’s (TMC) co-founder and principal organiser Mukul Roy into the BJP using the threat of corruption charges, Shah managed to secure a lead in over 140 assembly seats and got more than nine MLAs join the party from the TMC and the ailing left. In Bihar, despite the Grand Alliance of Nitish Kumar’s Janata Dal (United), Lalu Prasad Yadav’s Rashtriya Janata Dal and the Congress party won the 2015 election, Shah managed to poach Kumar within two years to form a government in the state and render Kumar crippled by clipping off his wings. In Tamil Nadu, Shah split the ruling All India Anna Dravida Munnetra Kazagham (AIADMK) and took it into an alliance to taste power in the Dravidian heartland. Though the AIADMK-BJP alliance suffered a setback in the recent elections, Shah is confident to turn the waves in its favour before the 2021 assembly election.

Throughout the northeast, the BJP has grown at a supersonic speed thanks to the volte-face performed by the seasoned political acrobats of the region. From Himanta Biswa Sarma and Bhubaneswar Kalita of the Congress to several leaders of the regional outfits either joining BJP or aligning with it under threat or after being lured with baits, the entire region that was hostile to Hindutva fascist ideology, has become its colonial project. Hindutva fascism is now a major political theme in Assam, Manipur, Nagaland, Arunachal Pradesh and Tripura. The Hindi-Hindu-Hindustan juggernaut is bulldozing all remnants of local culture, language and tribal identity that didn’t synchronise with the broader idea of a Hindi-speaking, Aryan-supremacist India.

When the Jammu & Kashmir bifurcation bill was passed in the parliament and Shah scrapped Article 370 of the Constitution using a Presidential declaration, while imposing an unprecedented blockade, including a total communication blackout, in Jammu & Kashmir, locking the people inside their houses with a heavy deployment of paramilitary force, especially in the highly-militarised Kashmir valley, it became evident that the RSS and the BJP will now portray him as the unquestionable heir apparent of Modi for the prime minister’s position. Shah himself directed all state units to hail him and Modi through resolutions in legislative assemblies for the abrogation of Article 370. Though Shah, alike Modi, is over-ambitious and won’t love to remain under the shadow of his mentor for long, he still has to wait until 2024 for his turn as the prime minister.

In the meantime, Shah has started a set of unprecedented practices that will turn India into a centralised political entity and trash the remnants of its federal character as enshrined in the Constitution. Through amendments in the NIA and the UAPA, Shah ensured, before the Jammu & Kashmir step, that the Modi regime retains an upper-hand against dissenters and critics, who can now be easily stamped as terrorists even by accusing them of spreading “Naxal ideology”, which remains undefined. The Modi regime can override the powers of the state regarding law and order, and ensure that the NIA, which is an absolutely Islamophobic organisation, can arrest anyone without asking permission from the respective state government. Also, the UAPA amendment opened the opportunity to hold in custody and torture a person accused of terror charges for an indefinite period, without even producing them in a court of law.

Through these measures Shah has actually imposed a virtual emergency on India, taking the unofficial emergency, reigning since 2014, to a new level. Under Modi-Shah, no state ruled by their critics, like West Bengal or Kerala, can remain immune from central intervention. Alike Kashmir, Shah has instigated Hindutva fascists over West Bengal and Kerala by using the RSS propaganda that calls these states the breeding ground of Islamic Jihadis. Spewing Islamophobic venom by using the National Register of Citizens (NRC) exercise, Shah has already labelled the Bengali Muslims as termites and very soon the BJP will extend the scope of the NRC to other states, though it was meant for Assam only as per the Assam Accord of 1985.

The NRC, alike Article 370 scrapping, will be used to downgrade the status of a large number of Bengali Muslims in Assam, West Bengal and other states. It will help Shah to create a huge inventory of expendable slaves for big corporations to exploit and profiteer from. The narrative of Muslims stripped off their citizenship rights while Hindu immigrants provided citizenship will not only help boost the BJP’s Hindutva fanatic supporters’ morale but it will also give a thrust to the RSS’s plan of establishing a Hindu Rashtra by 2024, modelled according to the Zionist Israeli settlement system. A new era of Indian expansionist colonialism will also start under Modi-Shah’s watch, for which Shah will be credited once Modi takes retirement from active politics.

A sinister plan is prepared by Shah to culturally colonise all non-Hindi and non-Hindu people with brute force. Using muscle-flexing, money-power and luring stakeholders with lucrative baits, Shah and his RSS handlers are tightening their grip on each nook and corner of India. It’s just a matter of time that the criminal-turned-home minister will snatch away the remnant democratic rights from the marginalised people, especially the Muslims, and leave them at the mercy of hyper-masculine, Hindutva fascism-intoxicated lynch mobs of the saffron camp. With the entire state apparatus servile to him, there will be no “within-the-system opposition” to his nefarious design.

This simply puts the onus on the people’s democratic struggle against fascism to resist Shah and the Hindutva fascist empire he is helping to build. Only by taking on the Hindutva fascists through the route of democratic struggle to protect the hard-won rights of the people, the democratic and secular character of the state, as enshrined in the Constitution, can the menace rolled out by Shah and his colleagues be stopped and reversed against them. For this, it’s important that the anti-fascist, democratic and progressive forces form a broad alliance with a common minimum programme right now. As time is quite a luxurious item to be wasted now in this crucial juncture.