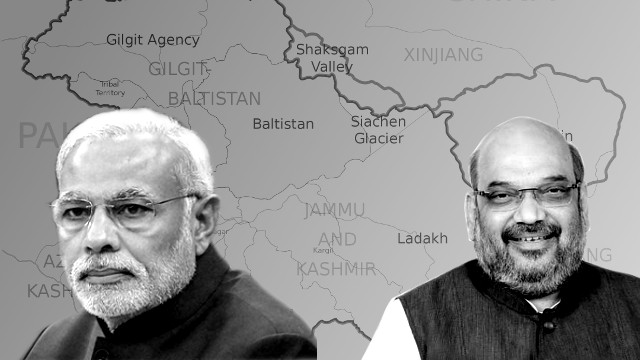 A series of lies were peddled by Prime Minister Narendra Modi‘s regime before it removed the special status of Jammu & Kashmir in the parliament by scrapping Article 370 and Article 35A of the Constitution. Alike the demonetisation exercise, the government didn’t blink its eyes while uttering sheer lies on the face of the people. The Bharatiya Janata Party (BJP) and its paternal body the Rashtriya Swayamsevak Sangh (RSS) didn’t mind to hoodwink the people and even to hurt the religious sentiments of the overwhelming Hindus whose interests they claim to represent.

Firstly, the troops were increased in the valley since the last week of July under the pretext of a security threat. Neither Modi nor his partner-in-crime Amit Shah, who passed draconian amendments to the UAPA and NIA Act a few days ago to ensure dissent can be suppressed with state terror, clarified the reason behind the increase in troops. The home ministry’s communiqué said that they have increased troops for “regular law and order duty“, while the personnel in the valley said that they need additional 100 companies (10,000 soldiers) as 200 companies would go for training. The entire angle of any security threat was not discussed.

Secondly, at the beginning of August, as the Kashmiri mainstream politicians kept asking the Modi regime the real reason behind the deployment of additional troops they were shooed away. The government claimed a threat to the Kashmir valley from Pakistan after the army alleged that it has recovered a rifle of the Pakistani Army. The incident of isolated weapon recovery, which is quite common due to the prevalence of militancy in the valley and the support it receives from the Pakistani Army for obvious geopolitical ambitions of Islamabad, was blown out of proportion and was use as an excuse to end the 45-day-long Amarnath Yatra, the Hindu pilgrimage in which thousands participate every year. This was an unprecedented move as the Amarnath Yatra was never called off in the past, even during the peak of unrest and violence. It’s now clear that the Modi regime lied to the Hindu pilgrims to end their Yatra abruptly even though there was no security risk but a calculated move by Modi-Shah clique. They could’ve waited until the Yatra was over on 15 August, but they didn’t. The so-called custodians of Hindu religion lied blatantly to the Hindu community, knowing well that there will be no backlash because the inconvenience of hurting religious sentiments won’t occur if Kashmir is the factor.

Thirdly, Article 370 and Article 35A were scrapped unilaterally by the Modi regime. For any such move, it’s mandatory for the President to seek the opinion of the state legislature, which stands suspended. The Election Commission, which can now be called a party to this conspiracy, didn’t declare polls in Jammu & Kashmir in March blaming poor law and order situation. Polls in Jammu & Kashmir are farcical and yet they weren’t held because India wanted a no-interruption-scrapping of these essential bills that were foundations of Kashmir’s accession to India. This makes the Election Commission a party to this exercise of duping the public by issuing wrong statements. The Modi regime’s puppet, Governor Satya Pal Malik lied once about not receiving the fax from Omar Abdullah, after he forged an alliance with Mehbooba Mufti — the former chief minister — to form a government in Jammu & Kashmir after the BJP withdrew its support to the coalition government led by Mufti in 2018. The reason of that lie was to pave the way for 5th August 2019, to have Kashmir annexed by India by bifurcating Jammu & Kashmir.

Fourthly, the government claimed that the integration of Jammu & Kashmir into India as a union territory will improve its development and provide more opportunities to the people. Neither the Modi regime nor Home Minister Shah dared to tell the people through the parliament that despite a brutal military occupation, despite state repression, Kashmir still manages a better economy than other parts of India, especially the BJP-ruled states. The urge to scrap the two crucial articles was fuelled by the necessity to hand over the land, forests, hills and public resources of Jammu & Kashmir to big crony-comprador capitalist donors of the BJP like Adani, Ambani, etc. The tweet by Gautam Adani congratulating the government on the “historic move” and expecting “development” of Jammu & Kashmir signalled the beginning of a new phase of corporate loot and plunder. The lie of nationalism is always peddled by Modi & Co to cover up their unapologetic corporate appeasement agendas. The real patriarch of the Modi regime will enjoy unbridled access to resources and labour of Jammu & Kashmir, of course, with the help of the military prowess of New Delhi.

Fifthly, while taking this drastic action on Articles 35A and 370, the Modi regime didn’t inform the parliament that its move is itself unconstitutional because the Presidential declaration can scrap Article 370 only when such consultation came from the state legislature. With the state assembly in suspension for an unreasonably long time, and the centre ruling Jammu & Kashmir through a puppet governor, it’s not the right condition for scrapping Article 370, which even the Supreme Court had upheld earlier. The Indian Constitution is allowed to be amended only when no changes to the basic structure of the Constitution are made; however, Article 370 is part of the basic structure of the Constitution, hence, such amendments hold no legal grounds, apart from moral grounds, and abrogating Article 370 will push Jammu & Kashmir to the pre-October 1947 condition, which will immensely benefit Pakistan in international forums to push for a resolution against Indian occupation for violating the accession treaty.

And lastly, the Modi regime has blamed the Muslims for “lack of development” in Kashmir and claimed that people will be able to now buy land and property in Kashmir. However, it didn’t say that who will be ready to sell their land and property to Hindu settlers from Indian states? The Modi regime also didn’t inform the people of Jammu, especially the Dogra and other people, how an influx of outsiders will marginalise them in the society and have the ownership of their resources gone to the settlers. The plan to change the demography will not only impact the Kashmir valley but also the Jammu region as well. Moreover, it’s Jammu that will suffer the worst than Kashmir due to the relatively peaceful situation that prevails there.

Lies and propaganda have been the driving force of the Modi regime since 2014 and when blended with jingoism, they make marketing wonders. Hoodwinking the masses using pseudo-nationalist rhetoric and relative optics are the locomotives of Modi’s success. By implementing its election promise of scrapping Article 370 of the Constitution under questionable circumstances, Modi wants to divert all public discourse from the gargantuan economic crisis that has seized India and rapidly generating unemployment, inflation, contraction of industries and tax terrorism. Apart from the poor, the corporate lobby that’s not able to match the donation spree of Adani or Ambani, are unable to cope up in the volatile situation. These things are creating a massive force to be reckoned with, however, like an all-weather weapon, Modi is playing the jingoism card repeatedly to stall people’s conversation on immediate, burning issues.

By exposing his lies and the hollow and vile propaganda of the BJP to the poor and the downtrodden masses, the real democratic and anti-fascist opposition forces must begin creating new narratives rather than dancing to the tune set by Modi-Shah duo on behalf of their corporate masters. Indian economy will go into a severe crisis mode in the days to come, leaving hundreds of thousands jobless, and that will not be an ideal situation for a Modi fan to buy his dream plot in Kashmir singing patriotic hymns at the highest pitch because he will simply have no money to fulfil his dreams. In this utmost chaotic situation, which has started manifesting itself in more ways than one, Modi and Shah can’t prevent the inevitable with gimmicks and convenient political optics. A country of 1.3 billion is too much for those to handle who will wash out if seven million Kashmiris unitedly stand against them.