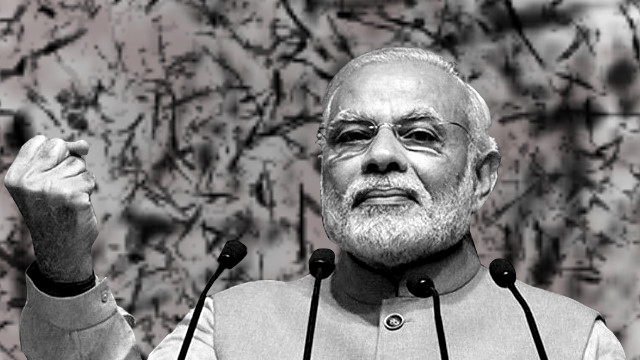 Days before his television address to the nation, Prime Minister Narendra Modi tweeted that he salutes the “sisters and brothers of Jammu, Kashmir and Ladakh for their courage and resilience.” In the same tweet, while indirectly hitting out at the former chief ministers of the disputed territory — the Abdullahs and Muftis — he said “J&K is now free from their shackles. A new dawn, better tomorrow awaits!” While he tweeted this, the entire Kashmir valley and many areas of Jammu remained under an unofficial curfew, with no telephone, mobile or internet connection. Amidst the presence of a large number of troops, who have garrisoned Jammu & Kashmir, the most-militarised zone in the world, the people, including the pro-India politicians, were left to lurch in the dark, due to a total communication blackout.

Maybe, the prime minister wasn’t aware that no one in Kashmir could read his tweet because they have no internet. It’s not clear how he anticipated that they are supporting him. It’s also not clear how #KashmirWith Modi was trending on Twitter when the Kashmiris didn’t have any internet access. If his tweet wasn’t enough to mock the agony of the brutally humiliated and dehumanised Kashmiris, then his address to the nation, on another eighth day of the month at 8pm, like his demonetisation speech, started with the regular venom spitting against the Kashmiri freedom struggle, his political opponents and everyone who doesn’t fit into the Hindutva framework.

The much-awaited “address to the nation” by Modi, a monologue like his monthly radio show — Mann Ki Baat — started with him lauding his Bharatiya Janata Party (BJP)-led National Democratic Alliance (NDA) government for taking a brave step. He didn’t care to tell the world the dangerous implications of this decision of the NDA, which will keep the Kashmir valley on fire for many years to come and the BJP’s obnoxious agenda of changing the demography of Jammu & Kashmir by promoting Hindu settler colonies.

Rather, throughout his speech, Modi spoke about development and opportunities that will come to the new union territories of Jammu & Kashmir, and Ladakh. He said the public sector units (PSUs) and the private sector will increase employment opportunities in the region and will transform the region into a “developed one” soon. He didn’t mention anyways that the per-capita income of Jammu & Kashmir residents, despite all the turmoil and military rule, has been higher than that of his home-state Gujarat, where he managed affairs directly for 12 years.

Modi didn’t inform the “nation” that the country is reeling under a severe economic crisis, where the major industrialists are warning the government of horrible implications. A major trade lobby met Finance Minister Nirmala Sitharaman recently to demand a bail-out opportunity for the private sector from the public fund under the garb of a relief package. Promising job and development to Jammu & Kashmir, he didn’t dare utter that unemployment is at four-decade-high in India, a fact that his government and the BJP vehemently denied before the Lok Sabha election, yet accepted after the results were out.

Modi couldn’t tell the people that his government has withdrawn Rs 98,000 billion from the Consolidated Fund of India — the consolidated savings of the nation — when it’s earning not more than Rs 25,000 to Rs 30,000 billion a year from direct and indirect taxes. This huge sum, which Sitharaman took to meet the expenses of 2019-20, will be impossible to replenish due to lower returns. This can be termed as a broad daylight loot of people’s money for BJP’s public gimmicks.

Talking about development, Modi didn’t say that his model of development is triggering massive job losses in the manufacturing sector, especially in the automobile sector, where more than 30,000 people have lost their jobs since he returned to power in May and the Damocles sword of lay-off hangs over many more necks. Modi didn’t tell the people of Jammu, Kashmir and Ladakh how his government will catapult their economic condition when it couldn’t do that anywhere else in India. He couldn’t say what’s that magic wand to increase job opportunities when that didn’t happen in Indian states.

As Modi conveniently lied about bringing the PSUs and private sector to Jammu & Kashmir to create jobs, he concealed the fact that his government is going to start a massive divestment and selling off drive of 46 PSUs. Thousands will lose their jobs in the process. The Indian Railways, the largest employer among all PSUs, is laying off 300,000 employees this year as it’s unable to pay wages to them. The telecommunication PSUs like MTNL and BSNL don’t have any funds to pay the salary of their employees. For the sake of one of Modi’s biggest sponsors Mukesh Ambani’s JIO, the two PSU telecom companies are allowed to die. Will they be able to provide jobs to people of Jammu, Kashmir or Ladakh? If yes, then why they aren’t able to pay wages to employees in India or even get a 4G license? Why the PSUs, from banks to insurance, from railways to steel, are reeling under a severe crisis that both Modi and his cabinet are trying to conceal?

For Modi and the entire Sangh Parivar headed by the Hindutva fascist Rashtriya Swayamsevak Sangh (RSS), which happens to be the BJP’s paternal body, the Jammu & Kashmir issue is a part of their insidious project to turn India into a theocratic dictatorship called the Hindu Rashtra, as envisioned by its early ideologues like MS Golwalkar and VD Savarkar. The Hindu Rashtra project is a project of Indian expansionism in South Asia under the patronage of the US imperialism and its global allies like Zionist Israel. Its international unity is with the Islamophobic white supremacists, Zionists and neo-Nazis. It unapologetically wants to establish an official rule of the Brahminical upper-caste elites and engulf all non-Abrahamic minority communities, dehumanise and strip the Muslims and Christians of basic human rights, and subject the Dalits and tribal people to a severe apartheid rule.

As Jammu & Kashmir remained a Muslim-majority territory that was occupied by India in connivance with its erstwhile reactionary Hindu king, it was a long-term dream of the RSS-led Hindutva camp to transform this land into a Hindu-majority one through ethnic cleansing and by replicating the Zionist Israeli settlement method. Now that the Modi regime scrapped the Article 370, by imposing a virtual military rule, it didn’t bring any qualitative change to the lives of the Kashmiri people who have been fighting for their just right to secede from India and become an independent nation.

There were no real special rights that the Kashmiris ever enjoyed through Article 370, rather it was a formal way to enforce India’s hegemony over the valley and other regions like Jammu and Ladakh. If the Indian Constitution wasn’t imposed fully, it didn’t mean that the Indian forces had any restraint in persecuting and suppressing the Kashmiri people. Being the most militarised region of the world, the Kashmiri people were left without their minimal rights since the 1960s. The Indian rulers, through the most grotesque military rule on earth, killed more than 75,000 Kashmiri people since 1989 in Kashmir valley. Even during the tenure of the last Dogra king, the RSS and the Dogra army jointly massacred 200,000 Muslims in the Jammu region to turn it into a Hindu-majority region.

The prime minister’s rhetoric about freeing the Kashmiri people from the reign of corruption and family rule are essential parts of the anti-establishment template that the neo-fascists use throughout the world to add credibility to their notorious deeds. The whole tom-tomming about jobs and development are also hollow rhetoric, however, what’s true is that chosen crony-comprador capitalists will now get unbridled access to plunder the natural resources of Jammu & Kashmir, including its water resources and forests, to profiteer. Gautam Adani of the Adani Group was one of the first capitalists to congratulate the Modi regime on the decision to scrap Article 370 and alike Modi, Mr Adani also spoke about “empowerment” and “development” of the region.

Indeed a lot of money will flow now, a lot of displacement, forced settlements and plundering of Jammu & Kashmir’s resources will take place as the Brahminical fascist Indian state will turn it into an official colony. Bolstered with the silence and nonchalant attitude of the western imperialist powers, the Modi regime will turn Kashmir from heaven on earth to the haven of corporate loot and plunder. Alike India, no change will come to the lives of people due to Modi’s development programmes but narratives will be built; strong narratives that will redefine Kashmir to the world.

For the people of Kashmir, they neither asked for crumbs of development nor did they invite  India, all they want is freedom to decide their fate. By locking them inside their houses, by imposing a military rule on them, by forcefully imposing a communication ban on them, India’s so-called Brahminical democracy has revealed to them that it neither cares a lemon about them nor would allow their voices to reach out to the world. It showed them that their dehumanisation and massacres will continue, while even their right to live in their homeland will be gradually withdrawn. The new dawn of Kashmir that Modi promised will be a blood-laced dark and grotesque dawn, which must be opposed and resisted by the people of Kashmir with resilience to ensure they exist and triumph as a nation.