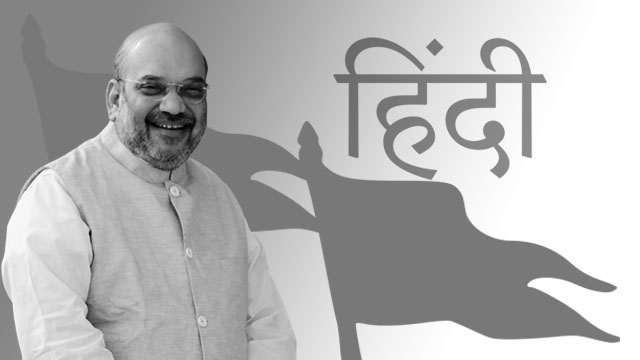 Bharatiya Janata Party (BJP) president and Home Minister Amit Shah triggered a new row over Hindi imposition on 14 September 2019, when he tweeted congratulating Indians on the Hindi Diwas (Hindi Day) by asking the country to adopt Hindi as the national language to link all people of the country. Shah used the reference of MK Gandhi and Vallabh Bhai Patel to push through the obnoxious agenda of the BJP and its parental body Rashtriya Swayamsevak Sangh (RSS) to turn India into a fiefdom of one language, one religion, one race, according to the Indianisation of the Nazi doctrine by one of its ideologues — MS Golwalkar.

Hindi, contrary to popular myths, isn’t the national language of India but one of its two official languages. English is the other official language of India. It was in 1949 that Hindi was made an official language and several later attempts by the Hindi-speaking Indian ruling classes — the big crony-comprador capitalists, feudal landlords and upper-caste Hindu usurers — to impose their language on the diverse people of the country who speak numerous languages and dialects, faced severe backlash. Still, the Indian ruling classes and their political outfits, like the Congress and the BJP-RSS, have always promulgated the language Hindi as the lifeline of an imaginary nation-state, which they want to build on the foundation of Hindu religion and Brahminical customs. They have shown Hindi as a unifying factor, while in reality, it’s actually divisive and discriminatory.

As a political party of the Hindi speaking elite upper-caste vegetarian Hindus, the BJP always wanted to impose Hindi as the national language of a multi-ethnic, multi-lingual nation like India. Its determination to push Hindi comes with its agenda of uniformising the diverse nation and its cultures according to the north Indian, upper-caste, vegetarian Hindu standards. It’s determined to pulverize any nationalistic resistance raised by any force that’s strongly against Hindification and Hindufication of India. Thus, the BJP is at loggerheads with the opposition Dravidian parties in Tamil Nadu and has also ignited severe nationalistic fervour among a large section of Bengalis, Hindus and Muslims alike.

For years, through the Hindi cinema industry, television and different other mediums, the Indian ruling classes, who adulterated the original Hindustani written in Devnagari script through voluminous Sanskritisation, resulting into the launch of what’s called Hindi of the present time, carried out a cultural colonisation exercise. Though the middle class and the elites of each region of India were horizontally divided over the question of Hindi, the urban poor people were often lured by the Hindi expansionists through cultural baits that connected well with them. Thus, the popularity of Hindi films, music, culture, literature, etc, surpassed that of the non-Hindi languages. Hindi was made mainstream by Dalal Street of Mumbai and the North and South Block in New Delhi.

With Hindi music, culture, and films getting popular and captivating the youth since the 1990s, it became easier for the Hindi aggression to entrench deep into eastern and northeastern India, where there was no resistance against the cultural sacrileges and brutal savagery against the indigenous cultures, which were gradually absorbed by Hindi. While almost all people of the seven sister states of northeast fought against Indian expansionism since the 1950s for their independence, the Indian ruling class’s new tactics since the 1980s caught them unprepared.

Rather than emphasising more on military prowess to subjugate the rebellious people and tribes of the northeast, the Indian state started rolling out cultural Trojan horses to captivate and enslave the masses without much bloodshed. With Hindi films, music and television programmes, much of the northeastern people were colonised and the being Indian propaganda was used to alienate them from their roots. This strategy paid rich dividends and has been in use since then. Under Prime Minister Narendra Modi, the Indian state has made Hindi cultural expansionism and Islamophobia as two major unofficial weapons to enslave and colonise people who have been outside the Hindi-Hindu-Hindusthan net.

The Bengalis in India, who were known as a fierce defender of their language, identity and culture, failed to resist the aggression of Hindutva fascism and its Hindi cavalcade as a united people. While East Bengal, which was carved out of united Bengal and made East Pakistan during the partition, fought against the idea of forming a nation using religion and deflated the Pakistan project by liberating themselves and founding Bangladesh, the Indian, caste-Hindu Bengalis, got swayed by the greater Hindu chauvinist propaganda and surrendered their writ to the Hindutva fascist camp. The failure mostly happened due to the melting down of the dominant Brahminical Bhadralok community in the face of the heat emitted by the Hindi aggressors. The Hindi-Hindu-Hindusthan juggernaut was able to pulverize the Bengali identity quite easily in West Bengal because it was fractured, weakened and often lured with the seduction of a larger Hindu and Indian identity by tapping the Islamophobic core of the majority Bengali Hindus.

Using xenophobia over the Bangladeshi infiltration propaganda, a few decade-old leitmotif used to coverup the exploitative reign of New Delhi on the northeast, the BJP and the RSS managed to secure a lead in Assam and the entire northeast. They have promised the ouster of the Bengali-speaking Muslims from Assam and West Bengal using the notorious National Register of Citizens (NRC), which excluded 1.9m people from its final list published on 31 August. Shah has categorically promised to include Hindus in the NRC and use it only for communal exclusion, adamantly going against the Indian Constitution’s Article 14. This has won him and the BJP a strong support base in Assam and the entire northeast where the xenophobia over Bangladeshi infiltration has provided extreme political ammunition to different players for years.

Although the Bengali community is considered as an outsider, infiltrator and, in Shah’s own words, “termites”, the Indian rulers have taken extra care to immunise the Hindi-speaking, upper-caste Hindus from north and west India, who own control over 90% of the non-agricultural resources in the entire northeast, especially Assam, and who play a crucial role in the political space. No one questions these parasitic classes who are not only exploiting the resource and labour of northeast, but also imposing their cultural hegemony on the indigenous people and by using the proselytisers of the RSS, they are ensuring more people speak Hindi, become Hindus and work under them showing utmost obeisance and loyalty.

Similarly in West Bengal, while the majority of Bengali Hindus are polarised under the Sangh’s saffron banner and are now used as pawns against the Bengali Muslims, who are 27% of the population, by vilifying the latter as infiltrators on a predominantly Hindu land, ignoring the fact that the Bengali Hindus and Muslims co-inhabited in the same land for centuries without any kind of antagonism of the present magnitude, the Marwari, Gujarati and other upper-caste, north Indian, Hindi-speaking Hindu communities aren’t shown as aggressors or infiltrators, though they have concentrated the ownership over all non-agricultural economic activities, especially trade and commerce, of West Bengal and rendered the Bengalis, the tribals and other people economically-dependent on them. They have not only taken control of what amount of money the Bengalis, the tribals, or the indigenous people will earn, but they have also taken control of what culture these people will adopt, what food they will eat and what customs they must follow in their daily discourse.

The Hindi aggression isn’t about merely forcing people to speak Hindi, unlike what the Pakistani rulers tried in former East Pakistan. The cunning Hindutva fascists want to first establish the supremacy of Hindi over all languages, which the Indian ruling classes have been trying since ages. Once, that’s done, which is clearly visible in the mushrooming of Hanuman temples, Akharas, Hindutva fascist training camps, Ram Navami, Hanuman Jayanti, Ganesh Puja, and other alien cultural customs and festivals that have been mainstreamed in the Bengali society since 2014, it won’t take much to cajole the vulnerable culturally colonised people to believe in what the rulers want them to.

With no political party strong enough in West Bengal or the neighbouring states of the northeast to resist Hindi aggression fearing the reprimanding from their Marwari, Gujarati and Hindi-speaking crony-comprador capitalist funders. Even if some entities like Mamata Banerjee’s Trinamool Congress are opposing the aggression, they are also appeasing their core donors and fundraisers by replicating the same model of the RSS. The recent thumping victory of the BJP in West Bengal, where it won 18 out of 42 seats on its own in the Lok Sabha election, happened due to the immense funding the party has got from the north Indian, Hindi-speaking, upper-caste Hindu elites and middle class, and also due to the manpower that these classes provided to the Hindutva fascists to fill their organisational ranks. It’s, therefore, a utopian thought that the mainstream parties that are running on the money pumped in by these classes will defend Bengali or other indigenous cultural identities from a brutal sacrilege and colonisation.

Aiming the 2021 assembly elections in Assam, Kerala, Tamil Nadu and West Bengal, the BJP is trying to woo the local populace with the Islamophobic vitriol. The BJP is certain of winning in Assam and West Bengal as the local majority Hindu community in these two states are subjugated through brainwashing and radicalisation. It’s less likely that the BJP will face any challenge in these two territories. However, the fight will be bitter in Kerala and Tamil Nadu, where its attempt to pound the resistance to Hindi language and upper-caste, north Indian, Hindu culture will face severe local resistance. To soften that resistance, to wean away from the Dravidian parties the tempo, the BJP will roll out the Hindi implementation in several layered stages and eventually enforce it on the people.

Neighbouring Karnataka and Telangana are already under the Hindi roller; Andhra Pradesh has already succumbed to the Hindutva baits under YS Jaganmohan Reddy, while the ruling AIADMK in Tamil Nadu has already sold its Dravidian soul to the BJP in return of crumbs. The only resistance will come from the DMK, MDMK and other anti-Hindutva Dravidian forces that will strive to resist the Hindi aggression. In this situation, any people’s movement in West Bengal, Karnataka, Kerala and in the northeastern states against Hindi will provide a major setback to Modi’s attempt to turn India into RSS’s dreamland —  a Hindi-speaking, Hindu-dominated, theocratic constitutional monarchy — by 2022.

If any attempt to change India’s Constitution using the BJP’s brute majority in the Lok Sabha is vehemently resisted on the streets by the Dravidian, Bengali, Assamese and indigenous people and tribes of east and northeast, then the RSS’s caravan of Hindi-Hindu-Hindusthan can be destroyed and the multi-ethnic, multi-lingual character of India can be preserved. Only such intense struggles by the indigenous and non-Hindi, toiling masses to preserve their identity and prevent being washed away in the Hindi-Hindu-Hindusthan flood, will prove that despite Shah’s and Modi’s fantasy of turning India into a monolithic entity, it will never budge; India will fight back, like it always did, against the Hindi-Hindu-Hindusthan bogey to retain and strengthen its vivid, diverse, multi-ethnic and multi-lingual identity, which no Brahminical supremacist forces can do away with a language and culture of their choice.