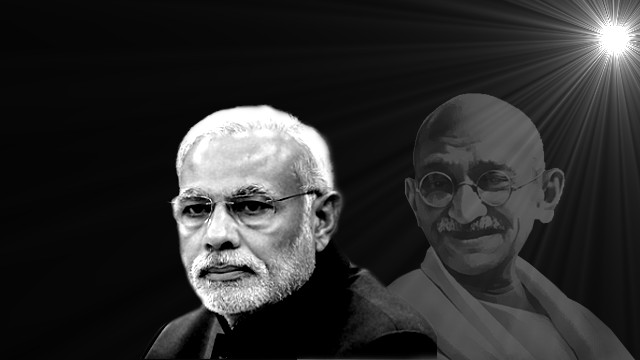 A right-winger is always conservative about family structure and values. Irrespective of the country, the society or the upbringing they have, the right-wingers, who adhere to the fascist doctrine, always believe in the idea of a perfect family, which has an ideal father, a subservient mother, and energetic yet obedient, faithful and disciplined children. Whether it’s a Zionist terrorist in occupied Palestine, a Hindutva fascist in India, a white-supremacist in the US, the UK, Austria or Greece, they all believe in the same notion of a perfect family and hates anything or anyone who poses a challenge to that notion, to that ideal scenario. Having only a father, without a properly described mother, will not be their ideal family scenario. Yet, by calling Indian Prime Minister Narendra Modi as the father of the nation, the Hindutva fascists — inspired by the American white-supremacist tyrant Donald Trump — are actually mocking their own faith in the concept of a perfect, traditional and sanskari (cultured) family. They are promoting an incomplete family.

During Modi’s spectacular Howdy Modi event in Houston, Texas, where 50,000 upper-caste Hindus, out of the 2.8m-strong Indian-American diaspora, participated and cheered for the Indian prime minister, an overwhelmed Trump, who spoke in his signature boorish fashion, caring a lemon about facts and figures, accoladed Modi the honour of being the father of India. He credited him of uniting a torn India and praised his governance. This made it easy for Modi to call his rumbustious supporters to vote for Trump in 2020. A perfect give-and-take relationship.

Hitherto, thanks to the Congress party’s incessant propaganda and sanitizing, Mohandas Karamchand Gandhi, the man celebrated by the capitalists and their big corporations as the champion of peace and justice around the world, was unofficially known as the father of the nation. Gandhi was killed in 1948 by a Hindutva fascist named Nathuram Godse, who still has a cult following among Modi’s party — the Bharatiya Janata Party (BJP) — and the entire Hindutva universe. Though there is no official title or honour issued to Gandhi, yet, he became the unofficially official father of the nation since his death.

Soon after the title was accoladed to Modi by Trump himself, there has been a mixed reaction all over the country. While the Congress party and other opposition parties criticised Trump’s eccentric behaviour and his egregious act before an ebullient audience thrown into a delirium of joy, the Hindutva fascist camp in India and the US, headed by the notorious Rashtriya Swayamsevak Sangh (RSS), which is the ideological parent of the BJP, boisterously supported the concept, despite having peddled the concept of “Bharat Mata” — a mother deity of India — as the mother of the nation so far.

Modi’s minister of state for the northeast, Dr Jitendra Singh, made Trump’s announcement a yardstick to gauge the level of Indianness one has attained. Dr Singh told the press that anyone who has a problem with Trump calling Modi the Father of India isn’t an Indian. It’s praiseworthy and quite liberal of him that unlike his party and RSS colleagues he didn’t ask people to go to Pakistan.

Though the RSS has opposed the notion of the father of the nation concept, it has always idolised a Hindu Hruday Samrat (emperor of Hindu hearts) as its version of a Fuhrer to lead India. According to its goal of “one country, one party, one language, one religion, one law and one leader”, which boils down to the Hindi-Hindu-Hindusthan concept of the proposed Hindu Rashtra (Hindu theocratic state), the concept of a supreme leader is imperative. Though it goes against the RSS’s practice of promoting collective leadership instead of a cult, the concept of a supreme leader is one of the important strings apart from the quotidian Hindu identity and Islamophobia that bind its hardcore supporters.

Modi, as a brand, is manufactured by the RSS and the BJP for years, much before his rise in 2014, to head the Hindu Rashtra in making. Modi is supreme; he is unquestionable and he is the centre of gravity of the Sangh Parivar’s ecosystem. Modi’s gargantuan facade has even overlaid the organisation; despite him being RSS’s disciplined soldier, he has overgrown the stature of his mentor, the veteran Hindutva fascist LK Advani, and the BJP founder late Atal Bihari Vajpayee.

Modi, who didn’t add any value to the Sangh’s murky ideology, filled with vengeance, except making blatant lies and vitriolic propaganda mainstream, has now reached its pinnacle to be in the league of VD Savarkar and MS Golwalkar, the notorious ideologues of Hindutva fascism, who streamlined communal politics in India to help western imperialism tighten its grip on the Indian society. Under Modi, for the first time in the history of post-colonial India, the RSS is very close to realising its dream of destroying the secular, democratic and republican character of India for a theocratic, unitary, monolithic and constitutional monarchy.

For his loyalty towards the RSS since his teenage days until now, shown through his stints during the Ahmedabad riot of 1969, his rabble-rousing during the infamous Ayodhya Ram Mandir movement by Advani in the late 1980s and early 1990s, his complicity in the notorious 2002 Gujarat pogrom, and his government’s misdeeds since 2014, which on one hand, sold out India to big foreign monopoly-finance capital-owned corporations and their Indian comprador lackeys, and on the other hand, shrivelled the remnants of Indian democratic space and harmony in society, it’s not a big deal for the Sangh to allow Modi feed his megalomaniac soul by becoming the first emperor of the Hindu Rashtra.

As the Father of India campaign was started by Amruta Fadnavis, the self-styled celebrity wife of Maharashtra Chief Minister Devendra Fadnavis, by a slip of keyboard on micro-blogging site Twitter, where she addressed Modi as the “Father of our Country” while wishing him on his birthday, it’s not just a random phrase mongered by Trump, but one that the Sangh designed and developed in due consultation with the US imperialist hawks and used the opportune moment to deliver it through Trump.

Wishing the Father of our Country @narendramodi ji a very Happy Birthday – who inspires us to work relentlessly towards the betterment of the society ! #HappyBDayPMModiJi #HappyBdayPMModi #HappyBirthdayPM #happybirthdaynarendramodi pic.twitter.com/Ji2OMDmRSm

Now armed with a saintly award from Microsoft founder Bill Gates’s foundation for his role in building toilets, which will eventually lead to a Nobel Prize on the recommendations of the US and EU bloc of imperialists, Modi will surely pave the way for his ascension to Gandhi’s status. With his khadi spinning picture replacing Gandhi’s, Modi, driven by sheer hubris and self-obsession, will finally take over the control of fatherhood of the family Trump credited him of uniting.

One Gujarati will finally takeover a title of honour — the father of the nation —  from another Gujarati, who was killed two years before his birth, ironically by someone from his own political brethren whom his comrades still worship with absolute loyalty. India has completed a full cycle of its existence. It returned to where it all started from, the killers in the rulers’ attire and the former rulers cast to the oblivion or jailed. Karma is what it’s called, albeit, not sure whose.