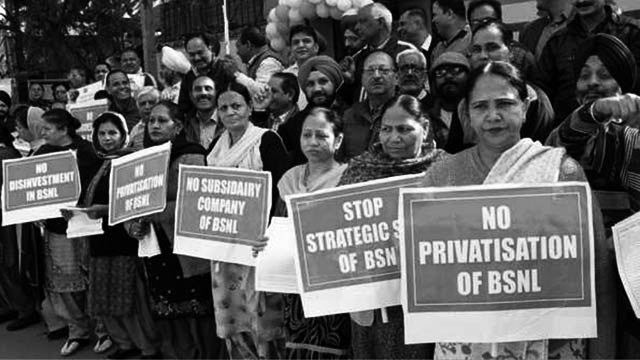 Finally, the 168,000 employees of Bharat Sanchar Nigam Limited (BSNL) and 22,000 employees of Mahanagar Telecom Nigam Limited (MTNL) are going to receive their due salary for the month of September 2019 by the end of October 2019 after Prime Minister Narendra Modi-led cabinet meeting gave nod to a Rs 687.51 billion package to revive these two public sector units (PSU). The government plans to merge BSNL, which operates pan-India and MTNL, which operates only in New Delhi and Mumbai, within a few months.

Incorporated in 2000, the BSNL had been a profitable PSU until 2009, when it started facing losses due to the erstwhile United Progressive Alliance (UPA) government’s indifference. The Congress party-led UPA allowed the private telecom operators to grow their network and connectivity using the BSNL’s fibre optic network without paying the company anything.

By stealing resources from the BSNL, the private telcos became exponentially richer, while the PSU reeled under a severe crisis. After suffering under the UPA’s scam-tainted 2G and 3G spectrum auctions, the BSNL got a semi-fatal blow in 2014, when the Modi regime started auctioning 4G spectrum without allocating it any. The government stopped the BSNL from participating in the 4G spectrum by citing its weak fiscal health.

The employees of these two state-owned enterprises have waged a fierce struggle against the apathy of the Modi regime and its policy of shameless corporate appeasement for years. Their struggle grew stronger in 2019 as their salaries became irregular. The BSNL has a monthly wage bill of Rs 8.5 billion and along with its other expenditures, the deficit that the company faces every month is nearly about Rs 10 billion. The government’s indifference affected the payment of timely salary to employees.

The government’s sudden ‘U-turn’ on BSNL and MTNL happened only after a massive employees’ movement rocked the country since last many months due to irregular payment of salaries as well as the ulterior motive of the Modi regime and the ruling Bharatiya Janata Party (BJP) to close down these two PSUs for the sake of the growth of Reliance JIO, the mobile and telecommunication firm of Mukesh Ambani who happens to be one of the largest sponsors of the Hindutva fascist movement.

The BSNL employees planned a nationwide hunger strike while the MTNL employees were to organise a candlelight march to Modi’s residence demanding their salaries and asking him to stop favouring Reliance at the cost of a PSU. A major strike and such rallies during the Hindu festival of Diwali would have provided optics of Modi’s ignominy, which the BJP wanted to avert and thus they accepted the revival package with certain obnoxious terms and conditions.

Telecom Secretary Anshu Prakash claimed that the spectrum will be allocated to the BSNL and MTNL on an administrative basis within a period of one month. The government will also pay Rs 36.74 billion as GST for the spectrum. The spectrum allocation to BSNL worth Rs 141.15 billion will be in lieu of equity shares and about Rs 62.95 billion for MTNL in lieu of preferential shares.

Apart from this, the BSNL and MTNL are allowed to raise Rs 150 billion through long-term bonds, whose sovereign guarantee will be provided by the Government of India. The BSNL and MTNL are also expected to use the funds for their capital and operational expenditures as well as to restructure their debts. The total debts of these two PSUs are around Rs 400 billion, in which the MTNL has more than half share.

However, the terms and conditions of the package clearly indicate that the Modi regime is planning to weaken the PSU telco, even though the BSNL supports the entire military telecommunication. The Modi regime is proposing the revival package with a forceful retrenchment of nearly half of the employee strength in these two PSUs. There is a plan to offer a Voluntary Retirement Scheme (VRS) package to the employees of BSNL and MTNL above the age of 50, which will pay them 125 times the salary they would draw till 60 years.

Though the government is claiming that the VRS will be voluntary, the experience of most of the PSUs in India speaks a different story altogether. Employees are always forced to give up their jobs through bullying by those at the top.

The retrenchment, while there will be a moratorium on hiring new hands, will definitely weaken the BSNL and cripple its operational capacity to compete with the private telcos, especially Reliance JIO, which has thrived on its agony and pain.

Prakash also exposed the government’s plan to monetise these PSUs’ assets worth Rs 375 billion over a period of three years. “The assets primarily include land assets but also rental and leasing of their buildings. MTNL has around 29 retail outlets in Delhi alone”, Prakash was quoted by the PTI.

The asset monetisation plan will actually sell-off or rent out the assets of these two firms to private corporations at either a throwaway price or for free, allowing them to exploit the resources built with people’s hard-earned money to fill their coffer.

Despite this package and the lollipops dangled before them by the Modi regime, the employees of the BSNL and MTNL must not give up their struggles. They must understand that the sordid agenda of cutting down the employee strength by half must be opposed through a strong movement and the government must be forced to fill all vacant positions within these two organisations.

The BSNL and MTNL revival package isn’t a generous Diwali gift from Modi or the BJP, but a trophy that the employees won through their incessant struggles. It proves that the employees’ unity and an uncompromising struggle can always lead to major victories, and this path must be taken by the Hindustan Aeronautics Ltd, Air India and Indian Railways’ workers and employees. Their joint struggle, backed by the working class’s solidarity struggle will be a big blow to the Hindutva fascist Modi regime and its obnoxious agenda of establishing the sclerotic and omnipotent fiefdom of the ilk of Ambani and their foreign corporate masters.