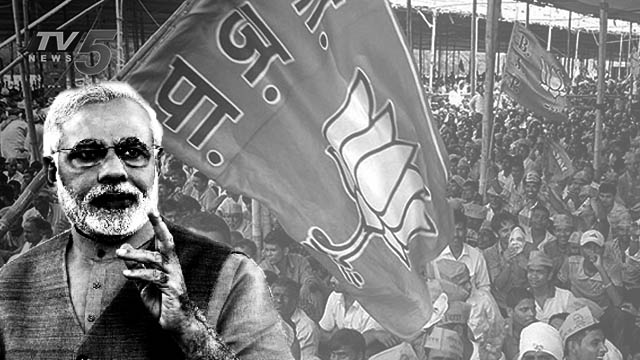 Though the Haryana and Maharashtra assembly election results show that the Bharatiya Janata Party (BJP) has a leading-edge, leaving the Congress party and the opposition gasping for breath, the arcane essence of the result shows that the situation isn’t as rosy for the ruling party as it tries to portray. Even though the BJP can use its clout over the Election Commission of India and sweep any election easily by rigging, it still can’t command the entire political landscape with absolute impunity.

In Haryana and Maharashtra, despite all opinion and exit polls predicting a clear thumping victory of the BJP and ignominious washout of the opposition, the election outcome showed that the opposition, which didn’t make much effort to oppose the BJP’s nefarious agenda, fearing a backlash in the form of anti-corruption investigations by Prime Minister Narendra Modi-led Union Government, actually bagged a better vote share than what was anticipated.

Until late evening, the BJP, led by Chief Minister Manohar Lal Khattar, managed to win 39 out of the 90 seats in Haryana, while leading in one. The Congress party, which was written-off from the race, even by our own estimation, made a remarkable come back under Bhupinder Singh Hooda, the dark horse. The Congress party won 31 seats, while the Jannayak Janata Party won 10 seats, becoming the kingmaker. Other parties, like Om Prakash Chautala’s Indian National Lok Dal and the Haryana Janhit Party, won 1 seat each. Independents won seven seats.

Surprisingly, the BJP managed to win all 10 seats of the state in the last Lok Sabha election with 58.02% of votes, an upward swing of 23.32% votes vis-a-vis its 2014 Lok Sabha tally. However, in this assembly election, the BJP got 36.47% votes. This drop in the vote share, by 21.55 percentage points, is either caused due to a low voter turnout, which was 70.34% in the 2019 Lok Sabha election but 67.97% in the assembly election — a 2.37 percentage point drop — or it may have been triggered by a gradually-rising anti-incumbency mood among the rural and the poor voters, especially over the unprecedented economic crisis and agrarian distress.

In the 288 seats Maharashtra assembly election, though all predictions asserted the BJP-Shiv Sena combo winning a thumping majority, the results didn’t reach a figure to gloat about. Until the late evening of counting, the BJP won 92 seats and leading in 13, its ally Shiv Sena won 54 and leading in two. The Congress party won 35 and is leading in nine seats, while the Nationalist Congress Party won 49 and is leading in five seats. Others, including the parliamentary left and Maharashtra Navnirman Sena, won 14 and the independents won 11 seats.

The BJP and the Shiv Sena retained their 2014 Lok Sabha election tally during the 2019 Lok Sabha election and out of 48 seats, they managed to win 23 and 18 seats respectively. These two parties collectively got 51.34% votes (BJP 27.84%, Shiv Sena 23.50%) during the Lok Sabha election. However, in the Maharashtra assembly election, they could only manage to get 42.14% votes (BJP 25.73%, Shiv Sena 16.41%). This 9.2 percentage point fall in vote share — the BJP’s 2.11 and the Shiv Sena’s 7.09 percentage points respectively — can be either attributed to the lower voter turnout in the assembly election, which was 60.46% vis-a-vis 61.20% of the Lok Sabha election, or it can be a fallout caused due to the economic distress, especially the intensified farm crisis that has made Maharashtra the leading state in terms of farmer suicides.

Apart from these two states, the assembly bypolls in other states also became problematic for the BJP. In Uttar Pradesh, where the BJP and its ally Apna Dal (Sonelal) contested 11 seats, the Samajwadi Party managed to win three seats, snatching one from the BJP. In Bihar, where ally Nitish Kumar’s Janata Dal (United) and the BJP together fought for five seats, they could win only one, while the Rashtriya Janata Dal won two and the All India Majlis-E-Ittehadul Muslimeen won one, its maiden seat in the state. In Kerala, while the parliamentary left won two seats, out of three, the BJP couldn’t manage any. In Punjab, the ruling Congress party managed to win three out of the four seats, while the BJP’s ally Shiromani Akali Dal (SAD) could win only one. The SAD also lost its strong bastion Jalalabad to the Congress party.

Even if the BJP and its allies maintained the winning spree in both Haryana and Maharashtra assembly elections, the trend, the faltering equation, especially in Bihar, which goes to poll next year, exemplify that despite all electoral malpractices, communal polarisation, vitriol and jingoism over Kashmir and Pakistan, Modi and the BJP are unable to retain their hegemony. The sudden shelling across the Line of Control on the eve of election and the shameless exploitation of the military establishment to further the cause of Hindutva fascist jingoism didn’t work quite well in Haryana and Maharashtra, unlike last time, when the political pundits credited Modi’s 2019 Lok Sabha election victory to his incessant marketing of the Balakote surgical strike.

The Haryana and Maharashtra assembly elections aren’t the sunrise moment for India, as the entire system is shamelessly rigged and turned into a docile tool of the BJP. It would have been better if the majority of the opposition forces would have jointly boycotted the Haryana and Maharashtra assembly election to expose the sheer bankruptcy of the so-called democracy or whatever is left of it. However, their shameless participation in the process, knowing well the fallacy, can’t be pardoned as naïve act.

Even though the BJP has suffered a little in the Haryana and Maharashtra assembly elections, in terms of the number of seats vis-a-vis the 2019 Lok Sabha election, at the end of the day its servile mainstream press will market this rigged, manipulated and unethical victory as a testimony of Modi’s infallibility and resilience. India must learn the lesson from Chile, Ecuador and Lebanon on how tyrannical, pro-corporate, anti-people governments should be opposed and resisted on the streets when they become absolutely omnipotent in the election machinery.

Unless a strong people’s movement is built to combat the anti-people Modi regime and the BJP on the streets, in the fields, in the factories and everywhere else, the menace of Hindutva fascism, promoted by the BJP, can’t be defeated by passive measures. If the people have to learn something from the results of the Haryana and Maharashtra assembly elections, then it’s that only a genuine people’s movement can combat the Hindutva fascist Modi regime’s anti-people policies and smash its halo of invincibility. Elections are merely the vessels of the Hindutva fascist regime to carry the mirage of a rickety system christened ‘democracy’; it serves no purpose than befooling the masses.